The Last Betrayal of Dick Allen

Yesterday, on what should have been the day after the Hall of Fame’s “Golden Days” era committee elected him for enshrinement, Dick Allen died at home in Wampum, PA.  It was the final injustice in what for him had been a lifetime of them perpetrated by the baseball establishment.

Allen came upon the scene in the early 1960s, after baseball’s first wave of integration had come and gone.  And while he was certainly a beneficiary of the struggle and hard work of men like Jackie Robinson, Ernie Banks, Hank Aaron, Willie Mays, and others, he was hardly handed anything.  Robinson’s autobiography may have been titled “I Never Had It Made,” but a generation later Dick Allen could pretty much say the same.

By the time he arrived large swaths of white America decided it no longer wanted to hear about baseball’s racial problem.  It had been solved with Robinson’s arrival in 1947, they liked to repeat to themselves and each other.  Baseball, as well, preferred to behave as though racism within the sport had been eradicated.

Allen’s treatment in Little Rock while playing for the Phillies’ AAA affiliate in 1963 has been well-chronicled and need not be retold here but not only did it scar him, the fact that he was labeled a malcontent for merely referencing issues of racism and inequality thereafter scarred him all over again.  Nobody – in Organized Baseball or in the stands -- wanted to hear it; it made them uncomfortable, perhaps, or maybe it called into question the amount of progress actually made between the time of Robinson’s arrival and Allen’s.  Or maybe it was because people read the sports section to escape from the world and not to confront it and they resented the ugliness of America staring up at them when all they wanted with their morning cereal was the score of last night’s game.  Likely it was a combination of the above.  So they blamed Allen.  And blamed him.  And blamed him some more.

By the time his first go-around in Philadelphia had come to an end, it was just so easy to blame him for pretty much everything.  Fans who didn’t have the stomach to understand him did, writers piqued that he wouldn’t jump to attention whenever they strolled over to his locker did, and a Phillies brain trust that slopped a disaster of a lineup on the field by 1969 that had no chance to compete did as well.  Better to blame Allen for their disgrace of a franchise than look in the mirror.

Over the decades things, we enjoy telling ourselves, have evolved.  We’re better now, we like to say.  The farther removed Allen became from baseball, the fewer the injustices.  Or maybe not.  For Allen’s recent brushes with the Hall of Fame suggest that things aren’t so different after all.

After being summarily ignored by the writers when he was up for enshrinement in the 1980s, Allen’s case for the Hall gained traction in the last several years as his advanced metrics screamed in black-and-white what fans who were paying attention decades earlier could have told you: that Dick Allen was one of the greatest hitters of his era.  In 2014 he found himself on the Hall’s “Golden Era” ballot and missed by one vote (12 were required for enshrinement).  Closer examination of that vote suggested that something smelled.  One of the committee members – Bob Watson – didn’t show up and was replaced at the last minute by Dave Dombrowski.  At least according to another committee member, Jim Bunning, the entire process was shrouded in confusion and secrecy.  "Bob Watson didn't make it. They never told us why,” Bunning to the Daily News’s Stan Hochman in February 2015.  “If he'd been there, it might have made a difference for two guys, Allen and Tony Oliva, who also got 11 votes.”  Maybe Watson simply got sick.  Maybe he missed his plane.  Who knows.  Well, somebody does.  But they’re not talking.  And this -- this secrecy, this tight-lipped arrogance -- is itself an injustice.

Still, Allen missed by just a single vote and the next scheduled meeting of the Golden Era committee was scheduled for 2017.  Until it wasn’t.  When the various veterans’ committees were reformed and rejiggered, the now “Golden Days” era committee wasn’t scheduled to meet until December 6, 2020.  Until, again, it wasn’t.

Citing the pandemic, the Hall announced that it was simply impossible for the Golden Days era committee to meet in one room and hash things out.  True that, but for the fact that the rest of the world had discovered the wonders of Zoom back in March.  And but for the fact that the rest of the Hall’s business – the election of the winners of the Ford Frick Award for broadcasters and the Spink Award for sportswriters – had not been similarly postponed.  When pressed, a Hall spokesman gave a fumbling, ham-handed response to the effect that for some reason it was necessary for the Golden Days committee to meet in person.  Apparently unlike the United Nations, which had somehow figured out how to conduct its business via Zoom, the work of the Hall’s Golden Days committee is of such a delicate nature that Zoom is simply inadequate.  At this point it is suggested that you stop here and reread this paragraph over and over until the Hall’s reasoning makes sense of you.  On second thought, don’t under any circumstance do that because you’ll find yourself drowning in an endless loop of idiocy from which you might never escape.

Suffice it to say, another injustice.

Currently the Golden Days era committee is scheduled to meet next December.  At that point there’s a reasonable chance that Dick Allen will at last be elected.  But he’ll never know it.  That he died the day after the Golden Days committee by all rights should have met and elected him is something that should weigh heavily upon the consciences of every person involved in the parade of injustices perpetrated over the past six years.

Of course, it’s too much to suggest that these injustices were committed solely with Dick Allen in mind.  Others, such as Oliva and Jim Kaat, were similarly harmed by the Hall’s clumsy stubbornness.  But for Allen these were just the latest instances in a life replete with wrongs committed by those who should, and claim to, know better.

Perhaps he was at peace with this, given all that had come before.  After the ceremony held in August at Citizens Bank Park to retire his #15, Allen said that as far as he was concerned, he was already a Hall-of-Famer when he was inducted into the Negro Leagues Baseball Museum’s “Hall of Game” in 2018: “That’s the real hall for me,” he said.  “They are a very elite group. They’re part of the legends. And to me, the way that it’s going, it could be a little political the way [the Baseball Hall of Fame] does things, but however, it’s beyond me. I pay no attention to it.”

Dick Allen had learned decades before not to put his faith in the baseball establishment.  He was too real, too authentic, too willing to speak his truth for those insistent on foisting sugar-coated fiction upon consumers of what was once our National Pastime.  From the beginning baseball never wanted Dick Allen.  But his greatest gift to us was that he gave himself to baseball anyway.

Mitchell Nathanson is the author of  God Almighty Hisself: The Life and Legacy of Dick Allen. 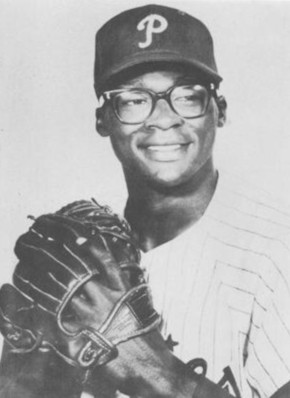 Allen was in his first year when my Dad took me to my first Phillies game at Connie Mack vs San Francisco as the day was July 28, 1964. Jim Bunning was the pitcher and with Gus Triandos hitting a 3-run-homer we won 4-0. Dick Allen lead the Phillies that day going 2 for 4 as no other Phillies player got more then one hit. I have since been a Phillies fan for life. I was there that night at the Vet when the Phillies won their first World Series in 1980.

I suggest the book by Jules Tygiel, Baseball's Great Experiment, which details the uneven path to integration in baseball after Jackie Robinson.

Well stated, Mitch. If any of you note my comment, do yourself a favor. Buy a copy of God Almighty Hisself and read it. You can count that as a tribute to a great man who happened to be an outstanding baseball player. As with Marvin Miller, his deserved HOF honor will come to late.