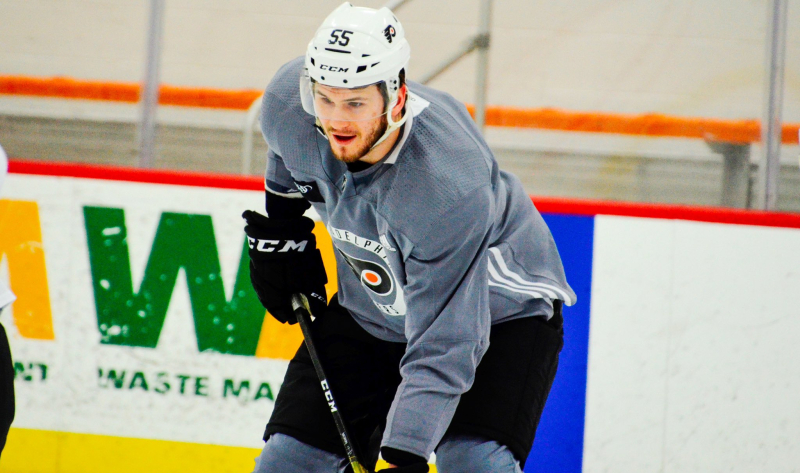 Monday was an off day for the Flyers following the Sunday evening scrimmage that concluded training camp. There was still work to be done, as the Flyers began making roster moves that reflect the final roster.

Seven players from the 41-man training camp roster were placed on waivers for the purposes of going to the AHL or taxi squad that will allow the Flyers to make recalls much easier in this unprecedented season.

Forwards Andy Andreoff and Sam Morin were placed on waivers, as were defensemen Chris Bigras, Nate Prosser, Derrick Pouliot, Tyler Wotherspoon and goaltender Alex Lyon. These seven players will all likely end up on the AHL roster where they should get more significant playing time.

That leaves a few bubble players remaining as decisions come down to the wire, all among players that are waiver-exempt and can be moved to the taxi squad or AHL without passing through the rest of the league.

There wasn’t much discussion regarding goaltending. Carter Hart and Brian Elliott were always the top two on the depth chart and Lyon is the only other on the roster requiring waivers. Roddy Ross could spend some time with the Phantoms in the AHL prior to the start of the WHL season before he returns to juniors. Felix Sandstrom will get some solid work in at the AHL level as well.

Among the defensemen, Wyatte Wylie is in a similar position to Ross. While the WHL season is delayed, he can spend time with the Phantoms, but he will eventually be spending the season elsewhere. Egor Zamula has taken several steps in his development, but Alain Vigneault made it known that he needs to show more growth before being NHL ready. Some significant playing time with the Phantoms will be good for him.

That leaves Mark Friedman as the only other defenseman remaining, other than the pretty obvious top seven. Friedman would require waivers to be placed on the taxi squad or AHL roster, so essentially, he has made the team as an eighth defenseman.

That leaves just the 13th forward spot. The Top 12 are pretty secure with fixtures from last season’s roster plus the return of both Oskar Lindblom and Nolan Patrick to the mix. There are six forwards who do not require waivers still left among that group. Tanner Laczynski figured to have a substantial chance of making the roster, but offseason surgery kept him off the ice with the rest of the team during camp, so he will either be on the taxi squad or in the AHL.

It’s also pretty obvious that despite solid first impressions, the two newest Flyers to the system – Tyson Foerster and Zayde Wisdom – will be among those heading to the minors while the OHL season remains in limbo.

Wade Allison was potentially making a case as well, but missed the close of camp listed as unfit to participate. That likely ended his bid of making the roster. This leaves four names left: Connor Bunnaman, Carsen Twarynski, Morgan Frost and Linus Sandin.

While moving any of those players to the taxi squad or AHL will be easy, this is where the competition at camp really heated up. Frost has continued to show signs of growth since turning pro and could make a push for this spot. The Flyers could choose a player like Twarynski or Bunnaman, who may not have the offensive potential of Frost, but fit a specific role well and have received valuable NHL experience. It could be Sandin, who Vigneault said is close to being in the mix, that can use his experience from the Swedish leagues to earn the 13th spot and be the next in line in a pinch if the Flyers need it.

These final decisions will only become clearer when the Flyers take the ice for practice on Tuesday. With one more day to prepare for the 2020-21 season, it won’t be a long wait until we find out.

On Monday afternoon, NHL commissioner Gary Bettman and deputy commissioner Bill Daly held a media availability and made a few announcements ahead of the start of the season. One was the confirmation of a special event that will feature the Flyers.

The NHL will officially hold two outdoor games at Lake Tahoe this season. One will be on Saturday, Feb. 20, between the Colorado Avalanche and Vegas Golden Knights. The Flyers will face the Boston Bruins on Sunday, Feb. 21, at 3 p.m.

“We are delighted to announce the NHL Outdoors at Lake Tahoe and can’t wait to get on site for what undoubtedly will be two thrilling games in a breathtaking setting,” Bettman said. “Ever since we began staging outdoor games in 2003 and made it a regular feature of our annual schedule in 2008, we have considered myriad non-stadium settings, but they always were rendered impractical because of the sheer volume of demand from our fans to attend. This season, unable to host our usual huge crowds at such events, we will continue our tradition of taking the game and our players back to their outdoor roots when the Avalanche meet the Golden Knights and the Bruins face the Flyers on an open-air rink at the spectacular Edgewood Tahoe Resort.”

“On behalf of the Philadelphia Flyers, we are thrilled to be able to participate in one of the two outdoor weekend games in Lake Tahoe,” Flyers GM Chuck Fletcher said in a statement. “In a real ‘Mystery Alaska’ setting, our game versus the Boston Bruins will take place on the shore of Lake Tahoe with the picturesque Sierra Nevada mountains towering above the rink. This will surely be an unforgettable spectacle and we’re very excited to be a part of it.”

This will mark the fifth time the Flyers have participated in an outdoor game. Their first appearance in 2010 came at Fenway Park against the Bruins, a 2-1 overtime loss. The Flyers also suffered a 3-2 defeat to the New York Rangers in the 2012 Winter Classic at Citizens Bank Park. They were also handed a 4-2 defeat by the Pittsburgh Penguins in the 2017 Stadium Series at Heinz Field. They finally claimed a victory in the 2019 Stadium Series, beating the Penguins, 4-3, in overtime at Lincoln Financial Field.