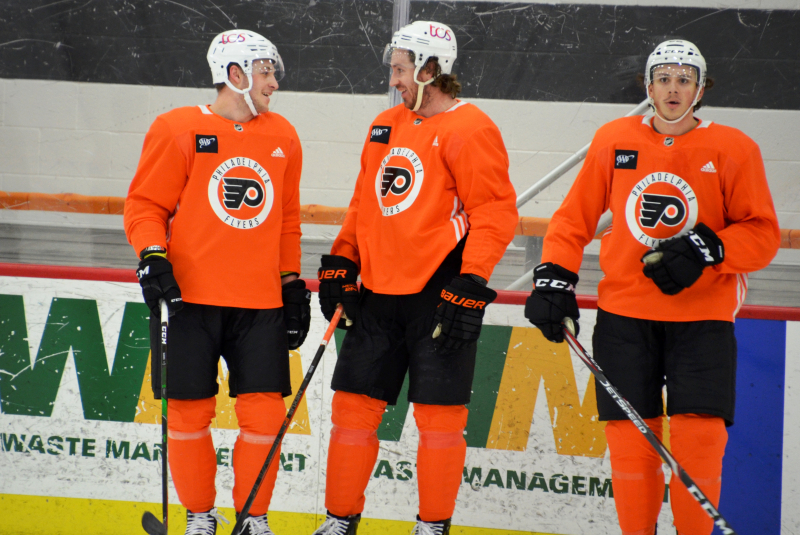 Tuesday was a momentous day for the Flyers, as they made their long-awaited return to the ice for practice. While it was a welcome sight, the group on the ice presented the reality that the team is far from being out of the woods when it comes to their COVID-19 outbreak.

The Flyers had 14 skaters and two goalies on the ice on Tuesday. The players that took the ice included the following list:

GM Chuck Fletcher added that eight more players are in a group that was not cleared to return to the ice due to their quarantine start date, but are expected to return tomorrow. The Flyers had five regular players not on the ice that are not part of the COVID list: Nicolas Aube-Kubel, Sean Couturier, Erik Gustafsson, Phil Myers and James van Riemsdyk. In addition, the following taxi-squad players were also not on the ice: Alex Lyon, Sam Morin, Nate Prosser and Carsen Twarynski.

“Our entire organization has been in quarantine for the last seven or eight days since we left Washington based upon some of the positive tests we received there,” Fletcher said. “Obviously our facility has been shut down. They’ve postponed games and they’ve cancelled practices. We were advised to stay away from the rink for a while. The entire team’s been in a league-mandated shutdown or quarantine since the trip to Washington, but not every player has the same quarantine start date depending upon their contacts with other players who may have tested positive. After going through the process of contact-tracing, we’ve identified a group of players, which is the players you saw on the ice today that were eligible to return to practice today. Another group of players, eight of them, will be allowed to return to practice tomorrow.”

The seven players on the COVID list for the Flyers remained on the list in the latest update on Tuesday afternoon: Claude Giroux, Justin Braun, Jake Voracek, Morgan Frost, Oskar Lindblom, Scott Laughton and Travis Konecny. Alain Vigneault said all of those players would not be available for Thursday’s game against the New York Rangers.

Vigneault also confirmed that Giroux was the player who tested positive last Tuesday, leading to the postponement of that night’s game against Washington.

“We had practice the day before, we tested, all the tests came back negative. We had two tests that we had to do prior to that game, rapid test and our normal test. I think it was G that came back positive, and they didn’t want to take any other chances so the game was cancelled,” Vigneault said. “We set up transportation the best way we could to keep everybody safe knowing we had the results of those tests and bussed back to Philly. Since that time, we’ve been shut down. We’ve been testing and going home and staying home. We’ve been doing exactly what the NHL wants us to do, and hopefully we got it in time and now this virus is going to stay away from our team.”

Vigneault also detailed the Flyers testing process over the last few days of the quarantine.

“We came in every morning between 9:30 and 10:30, some days we had one test we had to do, other days we had two. We came in through the front door, there was an area blocked out, we did our testing, got back in our vehicles and went home,” Vigneault said. “That’s what the mandate was from the league. We’ve been following all the protocols, and we’ve been following everything to the letter. I ‘m not exactly sure how this came about, how unfortunately we got a case that led to two that led to obviously more, but somehow it happened.  In our group one of the guys that I thought put the most emphasis on the mask and washing his hands and doing all the right things, social distancing, we have no idea how he got covid but he still got COVID. Let’s hope that the ones that do get it stay healthy, which is what has happened so far, and let’s hope that this is it and we get back to playing some hockey.”

“It shouldn’t be difficult to be competitive. It’s just the next-man-up mentality,” Kevin Hayes said. “We’re obviously down some important players, but I think everyone’s going to compete whether you’re a regular in this lineup or you just got called up and you’re playing your first game. There’s no questions asked whether you’re supposed to compete or not. Everyone in this locker room’s going to compete their hardest and give it their all.”

As a result of postponements on the Flyers schedule – due to both their quarantine and to other teams in the same situation – multiple games were rescheduled by the NHL on Tuesday, providing some clarity on how the Flyers will make up the time lost to get to the 56 games played to complete the regular season.

Five of the team’s games were rescheduled, but there are still three games that remain unscheduled as things move forward. The list of rescheduled games is below:

The three games that are still not rescheduled are the team’s two postponed games from last week – Feb. 9 on the road against Washington and Feb. 14 on the road against the New York Rangers – and a road game against the Boston Bruins that was originally scheduled for March 7 and has since been replaced by a home game against Washington. Rescheduled dates for those games will be announced later.