After a 60-game campaign, the Philadelphia Phillies like all major league organizations will be cautious with their pitching staff.. Franchises will scrutinize the workloads of their entire rotation and most likely even their relief corp as well. So, don’t expect the usual!

A Season of Ifs:

While many Phillies fans consider their team’s chances versus their divisional rivals, the most valuable ingredient is only visible when a club magically exceeds even their loftiest expectations. To illustrate, the Philadelphia Eagles won 2018’s Super Bowl with a backup quarterback over  Tom Brady.

“I just saw over the years that the times that we did remarkable things, it was always because players didn't want to let each other down. Players wanted to lift each other up.” - Theo Epstein

Even though many believe it’s impossible to compare sluggers from eons ago to today, starters are somehow exempt. Yes, those legends could hurl 300 innings and achieved their development in the minors because they spent a summer at each level: 16 teams, not 30.

With job-losing fear, those moundsmen pitched through pain and injury if they could, and those who couldn’t had a lower status. Translation: A top-tier Phillies prospect named Jim Wright kept throwing until a bone snapped in half and protruded through his skin. Well, that ruins the totally positive myth of studs back then.

Owners now pay millions for even a five-slot hurler, and they consider it an investment. Ergo, franchises don’t take risks with talented youngsters they’ll need to win for more than one campaign. And remember, the faithful expect a player to complete his contract regardless of length.

Moreover, organizations have insurance on their top talent, and some policies can cover 75 percent of a contract. But rate increases or cancelations can occur if the insurer doesn’t like the club’s health and safety approach. Also, a player must make every effort to play for a valid claim.

With 200 frames as an approximation for a starter, only 17 pitchers fired 70 innings or more up to 84 by Lance Lynn. Locally, Aaron Nola worked 71 ⅓ frames to 71 by Zack Wheeler. In Japan, left-hander Matt Moore reached 78 innings. Therefore, clubs will not allow their pitchers to triple their workload.

One anticipated solution is a six-man rotation with more work for long relievers like David Hale. Though, if you listen intentently, you can almost hear locals questioning Joe Girardi’s pitching changes: Ones he usually doesn’t make under normal circumstances. And another drawback is the 13-pitchers limit on a 26-man roster.

When Dave Dombrowski, president of baseball operations, joined the Fightins, they had $61.3 million AAV (average annual value) before exceeding the $210 million CBT (competitive-balance threshold). But deducting $37.1 million AAV for JT Realmuto and Didi Gregorius left the exec with $24.2 million AAV.

Dombrowski’s approach was to unearth the best quality pitching for the money on one-season deals. And because he knew the MLB innings situation, he sought bargains like Moore for $3 million and Chase Anderson for $4 million: $9 million total.

During his initial presser, Dombrowski named Nola, Wheeler and Zach Eflin without hesitation: ergo, his top three starters. And even though many fans believe Eflin is a four or five, his 3.97 ERA for 59 innings makes him a three-slot moundsman: Don’t expect a three to be an ace. Plus he still has some growth after 84 starts.

According to a former general manager in the American League, a player makes an impact in or after his third year: 90-105 starts. And last summer, Eflin improved on using his arsenal with then-coach Bryan Price’s assistance. With a full 162, though, better stats are a reasonable expectation.

Only three major leaguers worked more frames than Moore’s 78, and 2021’s workload will be a major obstacle for all teams, which explains seven-frame doubleheaders and the extra-innings rule. And, though, his 2.38 ERA was in Japan, he had fired two scoreless starts for the 2019 Detroit Tigers. Yeah, a healthy southpaw.

Under normal conditions --remember them?-- the red pinstripes would have a five-man staff, but Anderson, Vince Velasquez and Spencer Howard only recorded 33 ⅔, 34 and 24 ⅓ frames respectively. So, closely monitored innings per start will be a determining factor.

Even though Phillies fans won’t be happy, Velasquez will make starts and probably work as a long reliever also. In fact, all seven starters will toe the rubber to handle the frames required. And it will make a difference in the standings because aces won’t be eating 200 innings.

Pinning excessive hopes on Howard is expecting more than the rookie production of Cole Hamels and Tim Lincecum. Realistically, Howard has only six starts into his MLB career with a 5.92 ERA. Is the talent there? Yes, but he is green and will face more adversity.

Manning up only works for developed players, not rookies. Granted, he could outperform management’s expectations, but don’t judge success or failure on his ‘21 if he makes the Phillies out of spring training: not a lock. For now, he’s already a potential ace.

To sum up, 2021’s biggest question will be the rotation’s workload. For Nola, Wheeler, Eflin and Moore, 125-140 frames will probably be tops, while Anderson, Velasquez and Howard will likely work 70-85 innings. And what is any workload forecast from some baseball men and me? Pure speculation! 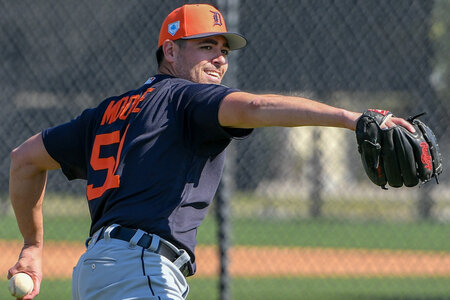 I don't mind a 6 man rotation as long as velasquez isn't 1 of 6.. Howard we know needs more seasoning in Triple A Velasquez needs a change of scenery.the signing of Rondon knitzler Bradley improves this bullpen immensely so much so I think Hale and Neris shouldn't be here either. Dombrowski has done a great job for what he had to work with..if they get Paxton or Walker Gonzalez and bamboo Brad and a legit CF not Haseley Quinn Kingery your looking at a playoff team. Harper Realmuto Didi deserve Middleton to go all in. Let's put it this way a few more tweeks and we are Contenders!

The Phils have $8.2 million AAV remaining, how far past that is going all-in? And how much more should they spend at the trading deadline?