Eagles Flyers Phillies Sixers Union About Us Write For Us
Pastrnak, Bruins Rally Back to Down Flyers in OT
Flyers 5: Takeaways from Wednesday's Flyers-Bruins Game

When Didi Gregorius agreed to sign, the Philadelphia Phillies faithful began speculating about the organization’s next move. Well, the team now has roughly $11.2 million AAV (average annual value) before exceeding the first CBT (competitive-balance threshold), and $10 million AAV is a reasonable amount for July’s needs.

Done or More to Come:

As the Phillies draw closer to March, the selling will then be a daily event. Yes, the players on the periphery must impress Joe Girardi and his staff to secure a spot in the rotation, relief corps, bench and the everyday eight. Translation: Put me in coach, I can play center field!

While many wait for the COVID-19 vaccine, the MLB and MLBPA may only change scheduling if the virus causes new problems. Otherwise, play ball!

The Fightins are at $198.8 million AAV with the first CBT at $210 million. Therefore, $11.2 million is available without incurring a penalty; though, managing partner John Middleton favored a slightly decreased payroll from 2020’s $208 million AAV before 37 percent prorating.

Besides re-signing JT Realmuto and Gregorius, the Phils inked late-inning arm Archie Bradley plus starters lefty Matt Moore and right-hander Chase Anderson. Yes, they are valuable signings at $13 million total. But inking Anderson may eliminate the adding of another setup man or Marwin Gonzalez.

Moore is returning to the Show after one campaign in Japan. Reportedly, he once was a top-three prospect with Bryce Harper and Mike Trout. And his career went smoothly for his first four seasons (2011-2014) before his Tommy John surgery preceded disappointing on-field results.

According to reports, Anderson hasn’t had elbow or shoulder injuries in his major league career. And since he’s had a 2.73 ERA (2017) to a 4.39 ERA from 2014 through 2020, he could push Vince Velasquez to the bullpen or Spencer Howard to Triple-A. Therefore, Velasquez could fill the open relief spot.

Following their offseason strategy, the red pinstripes pursued an up-the-middle combination of offense and defense. So, they focused on a catcher and a shortstop or their backup plan with a center fielder. And the best players were Realmuto and Gregorius.

Realistically, they didn’t want Jean Sugura at short but have no problem with him at the keystone. And this sets up Scott Kingery to earn the center field job or have a super-utility role. Fortunately, he could hit his way out of some doghouses locally.

While some Phillies faithful are considering acquisitions to be a contender --some a serious one-- the $210 million CBT is shy by only $11.2 million. And this is where armchair GMs don’t have rules and restrictions like Dave Dombrowski, president of baseball operations. Yes, limitations.

For fans, the spending is over until July without an unexpected opportunity to improve the team  is the unpopular approach. But even pre-coronavirus days had the strategy to hold back $10 million to plug holes before the second half. Ergo, the other $1.2 million could end up being the slight decrease in overall expenditures.

Or the execs are waiting to pick up a late-inning hurler for $2-4 million on a one-summer pact with a club option and a small buyout. Basically, those include ex-Phillies southpaw Jose Alvarez, Shane Greene, Jeremy Jeffress, Nate Jones and Brandon Kintzler.

At $19 million for ‘20, Mark Melancon isn’t on the target list because he was a closer and will probably not accept $4 million. However, Joakim Soria went from $8.5 million to $4 million, and Greene might also take $4-5 million in a shrinking market with many general managers at their financial limit.

Some relievers have stats for 2018 because 2020 had “routine and/or injury” obstacles. Therefore, ‘20 is not a true indicator of a hurlers’ ability. And I skipped risky pitchers with a significant velocity drop without the adrenaline rush they get  with spectators.

As for closing, Bradley will challenge Hector Neris for this short-leash role. Yeah, they must convince the skipper in March and the first half, but they’ll both toe the rubber in critical frames.

In the pen, portsider Jose Alvarado will be a setup man. But the “13-man staff rule” max is an additional complication with a six-man rotation. Basically, the other three spots could be Velasquez, a signing and/or two arms from lefties Ranger Suarez and Jojo Romero or righties Connor Brogdon and Sam Coonrod.

Before the All-Star break, players must convince management by their on-field results to swap for pieces to shore up their weaknesses. But this isn’t anything new; though, the pandemic has changed this process for some clubs with an inactive or cutting-payroll offseason.

If practical, Dombrowski could sell Middleton now for another setup man or Gonzalez. And the exec must also convince Middleton of the team’s playoff chances at June’s end. However, Middleton only owns 48 percent of the Phillies, so whom must he sell where the buck stops? Jim and Pete Buck! 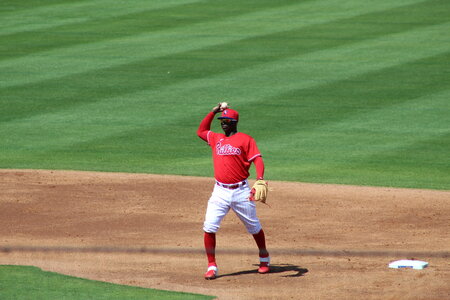 Forget more has been, so called inning eaters. What does that really mean?

Use Vince Valasqez and Spencer Hayward as one pitcher each pitching 4 or 5 innings.

Saves Hayward total innings and Vince has proved he is best for 1/2 a game.

When any other starter has a bad day, pitching 2,3,4 innings, move him up a day for his next start. If your starters are your best pitchers, use them more, keep them in games longer and use 2nd rate relievers less. Pitchers are bigger and stronger. What happened to pride inpitching complete games?

Where was Middleton drafted ? Send Him & His “budget “ to Kansas City. This is PHILLY ! Largest Fanbase supporting ONE TEAM. Ten Years....no playoffs. Yeah that guy REALLY wants to win. A disgrace to long time Fans & Our City.

While it's true that pitchers back in the day fired 300 innings, it's also true many pitched through injuries and pain. But the ones who couldn't handle that weren't considered to be studs. And others pitched until they couldn't. Starter Jim Wright --a top-tier Phillies prospect-- pitched until a bone in his throwing arm broke in half and protruded through his skin. Therefore, he kept going way past time to go on the injured list.

Also, today's pitchers make big bucks and are insured up to 75 percent, and premiums go up according to payouts.

Thanks, firstly, for reading.

Some teams are selling off players or are inactive. NYY is staying below the $210 million CBT for the entire year.

The Phils are within $11 million of the $210 million CBT. But if a decent reliever is available in the next 1-3 weeks, it's possible they will add $2-4 million in commitments. Also, if they have a real postseason shot, they may increase spending up to $225-230 million AAV.

So, the spending may not be done for this season.