The Philadelphia Phillies faithful are enjoying televised games from Clearwater, and manager Joe Girardi has already stated a five-man rotation and a center field platoon are possible. But could Aaron Nola and Zack Wheeler exceed doubling their 2020 innings?

For stars, spring training is leisurely getting ready for the long summer ahead, but others without guarantees must be competitive with every pitch on the mound or in the batter’s box. Last year, though, 60 contests led to some Phillies starters recording around 30 innings. A sixth rotation arm?

“Consistent motivation usually comes from a consuming desire to be able to perform at your best under pressure, namely, the pressure produced by tough competition.” - Coach Bill Walsh

Basic management is to get the most out of each individual, and leaders rely on many approaches. However, it depends on the circumstances and the personnel involved.

For the rotation, Girardi has established starters, veteran hurlers, a rookie and non-roster invitees. And he believes a five-man staff is doable despite going from 60 to 162 games. That stated, if he can do it, how would he accomplish it?

If Matt Moore, Chase Anderson and Vince Velasquez believe only two spots are available, they must produce in March to earn one. And they’d also be aware of Spencer Howard as another competitor if he’s having an impressive spring.

According to five sources for FanGraphs’ projections --referred to as guesswork by a national publication-- Nola, Wheeler, Zach Eflin and Moore will be able to handle an every-fifth-day assignment. But doubling their 2020 frames and adding 10 innings reveals a difference.

In the above table, the predictions could be unreachable even without postseason appearances. And I’m not the only writer who questions these workloads. So, are these calculations a specific formula or a computer-generated estimate?

If forecasted workloads fall short, a six-man rotation is the anticipated course many organizations may take. For the Fightins, Velasquez and Howard would be the most likely candidates for a sixth moundsman for regular or spot starts.

Other possibilities are Triple-A call-ups to shoulder some outings, veterans like Ivan Nova to work as long men, and multi-inning relievers. Basically, Girardi's usage in March will determine his thinking.

According to Girardi, Ranger Suarez’s visa delay has eliminated him from competing for the starting staff. But other clubs have pitchers who are a week or two behind, and they aren’t in the bullpen. So, do the Phils have too many rotation pieces or need lefty relievers?

The rotation falls into two categories: four hurlers who worked around 60 frames or more and three who pitched only half as much. Therefore, Nola, Wheeler, Eflin and Moore could double 2020’s innings plus 10 frames, which on the low end (Eflin’s 59) would equal 128 innings: 21 to 26 starts.

Moore could win the fourth slot because his workload in Japan was more than all but three major leaguers, and he’s the only southpaw candidate for the rotation. Ergo, Anderson, Velasquez and Howard could compete for the bottom spot, or two hurlers could split the same contest inning-wise every fifth day.

Because teams can only carry 13 pitchers tops, the Fightins will have seven regulars, Andrew Knapp, Brad Miller and four others: 26 total. For center field, the competition is Adam Haseley, Scott Kingery, Roman Quinn and Odubel Herrera. But Matt Joyce is a corner outfielder and a potential bench piece. No 27th player!

When many consider Haseley, Kingery, Quinn, Herrera and Joyce, they will easily find a no-brainer to cut. But the situation isn’t so easy any armchair GM could do it.

For some, Kingery’s 2020 (124 plate appearances) are enough to send him to Allentown’s alternate site due to Double-A’s and Triple-A’s seasons delayed until early May. Plus he has three options, but he will also earn $4.25 million regardless of his status.

Although Quinn has no MiLB options remaining, he has speed and defense, but he only batted .213 for 2019 and 2020. However, he’s making the MLB minimum salary, and the Phillies will keep him because he can prevent a loss with his glove and steal a victory with his wheels.

Another player with three options is Haseley, but he could platoon with Kingery and handle left field when Andrew McCutchen needs a day off. Also, he can play any outfield position and is progressing with the bat from ,266 (‘19) to .278 (‘20). Plus he hits to all fields and is therefore harder to defend.

Regarding the financial ceiling, Joyce would increase the AAV payroll to $211.4 million or $1.4 million over the CBT (competitive-balance threshold), while Herrera would lower it to $209.9 million AAV because his salary is in the total. Realistically, being under the $210 million CBT is preferable for April, not July.

Although Joyce is an excellent left-handed bench piece, the red pinstripes have Miller for that spot, and Joyce is only a corner outfielder. So, the veteran is obviously on the bubble with Herrera, unless management believes Herrera is either a clubhouse distraction or has regressed skillswise.

Whether he is on the 40-man roster or not, Herrera will receive $10.35 million for the final campaign on his $31.5 million five-year contract ($6.1 million AAV). Meanwhile, the players and organization of the New York Yankees have a similar situation with Domingo German, who was 18-4 with a 4.03 ERA in 2019.

Herrera will probably be a model citizen with his MLB dream at stake here or elsewhere. Moreover, his spring training performances could force the Phils to make a decision based on need and finances. In his first game, Girardi had him in right field: Herrera has defended the other two outfield spots.

While the skipper has Moore, Anderson, Velasquez and Howard competing for two slots or three with six starters, Kingery, Quinn, Haseley, Herrera and Joyce are battling for four spots and a platoon. But have you noticed something different so far: What else has limits in camp besides playing only five teams? The innings! 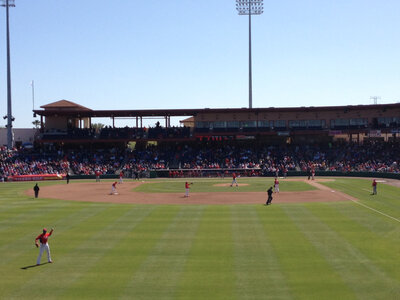 Unless Herrera has been keeping in super shape, he's got an uphill slog. Quinn is the keeper.

Thanks, again, for reading, Jim.

However, Haseley is out for a month with a groin strain. So, Quinn and Herrera will probably make the team, unless Moniak surprises everybody.