Eagles Flyers Phillies Sixers Union About Us Write For Us
Zach Eflin is Developing into one of MLB's Premier Breakout Candidates
Flyers-Penguins: Game 21 Preview

Even With Haseley Down, Herrera Has No Clear Path to Phillies Roster 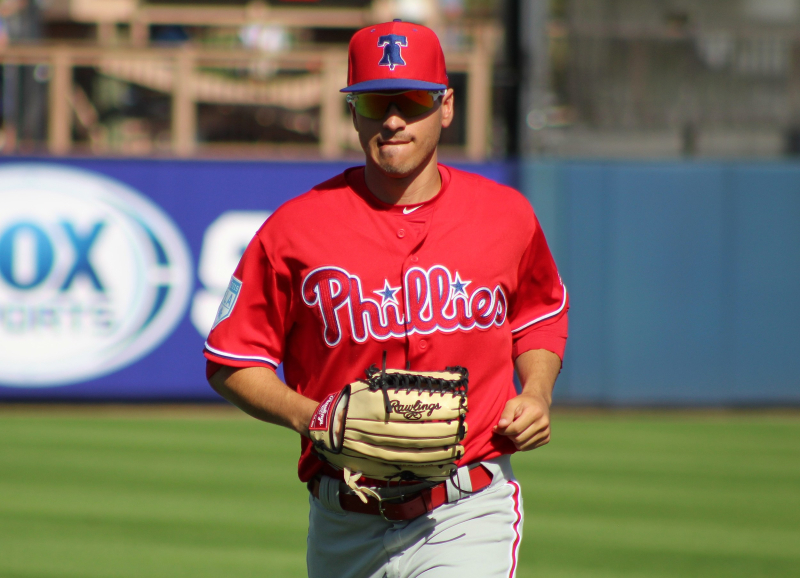 The Phillies got some bad news on Friday afternoon.  Outfielder Adam Haseley, who was to be one of the prime candidates to win the starting center field job, has suffered a strained groin.  The timeline given by the Phillies was four weeks.  That means the start of the 2020 season is in doubt.

For some, the attention turned to Odubel Herrera, who had a couple of decent enough games in the early going.  Would the Phillies have room for Herrera with an injury to Haseley?   The answer is "probably not".

The Phillies have many candidates for the center field spot in the outfield: Haseley, Roman Quinn, Scott Kingery, Mickey Moniak, Travis Jankowski, and then maybe Herrera.   Right off the bat, Jankowski and Herrera probably have less of a chance to make the club due to their roster status.  Finding a roster spot for Herrera or Jankowski will be hard.

The Phillies may need as many as three other roster spots: relievers Brandon Kintzler and Tony Watson are on minor league deals and have a good shot to make the club.  The same might be true for veteran bat Matt Joyce, who could be a prime pinch-hitter and back-up corner outfielder.

Joyce has excelled in the role in the N.L. East the last two seasons.  Herrera has never been a bench player.  I am not sure the Phillies would consider Herrera for what they envisioned for Joyce.  But like Joyce, Kintzler, and Watson, Herrear is no a member of the 40-man roster.

That 40-man roster is currently.  Finding roster spots for three players might be tough.  If Herrera would make the club due to an injury, that would make four spots necessary.

Cristopher Sanchez and Kyle Dohy might be the casualties for the 40-man roster, as maybe the club could slip them through waivers.  Infielder C.J. Chatham might be another.

Who would go beyond that for a fourth player in Herrera?

The Phillies will likely have Quinn and Kingery on the roster no matter what.  If Joyce is an extra outfielder, the Phillies are likely covered in the outfield.  If Kingery is considered primarily one of the back-up infielders along with Brad Miller, then there is room for one more spot for a reserve player in Haseley's absence.

Considering Haseley likely will not miss too much time, it would make the most sense to bring Moniak up to start the season, optioning him back to Triple-A once Haseley is ready.

If Herrera's stats are enough to warrant him making the roster, the same case can be made for Moniak.  In fact, after Moniak hit two home runs on Thursday, Phillies manager Joe Girardi declared Moniak "in" the center field competition.

So would a temporary replacement for Haseley warrant cutting another player from the 40-man roster for Herrera when Moniak is around?  Certainly no.