This wasn’t just another loss. This was a massacre.

After allowing the first two goals of the game to put themselves in another hole, the Flyers gave up another goal in the first two minutes of the second period. The game was essentially over right then and there, because the 18 minutes that followed were not just the worst the Flyers have played this season, they were historically bad.

The seven goals for the Rangers in the second period is a new franchise record for goals allowed in a period by the Flyers. It’s the latest chapter in a month that continues to get worse for the Flyers. There doesn’t appear to be an end in sight either. Not with the way their play is trending. Not with the schedule coming up.

Things could go from bad to worse – yes, somehow worse than this 9-0 loss to the Rangers – if things don’t get corrected soon.

Since the calendar flipped to March, the Flyers have become a team that has put themselves in a hole more times than not. Slow starts are becoming a bad trend.

Wednesday night was just another example. Before you even get to the second period debacle, it was another period where the Flyers fell behind and dug an immediate hole. Right away, you have to think about the end goal of a 2-0 deficit. You would need three goals just to be in position to win, and that’s barring no further mistakes. It’s hard to play mistake-free hockey for that kind of extensive period. As was on full display in this game, the mistakes were coming at such a rapid rate, it may not even matter what the score is.

In a loss like this, there are no specific players who escape their share of the blame. It’s collective. That said, the pairing of Travis Sanheim and Phil Myers had a historically bad game in their own right.

As the goals piled up in the second period, the broadcast noted that the Flyers plus-minus ratings for the game looked more like the Masters scoreboard. There were Sanheim and Myers right at the top at minus-6 for the game. They were also on the ice for the first five goals allowed.

It’s been a struggle for the Flyers to find combinations that work, but this is one that is regularly failing the test lately. Sanheim has seen his struggles ramp up in the last couple of weeks. Myers has looked lost for several weeks now, almost completely since his return. He’s been in and out of the lineup a few times as a result.

You can put all of your ire on this duo when the final score is 9-0, but their play has been awful lately and it sure showed in this game.

After a pair of turnovers and lost battles led to the two goals in the first period, the third goal was also scored off a turnover. From there, the game might as well have been over, because the Flyers stopped playing from that point forward in the period.

A closer look at each goal tells a lot of the story.

Goal No. 1 – All five Flyers are crowded together as the Rangers get inside positioning with Brendan Lemieux going to the net. Goal No. 2 – Turnover along the wall creates a 2-on-1 between Ryan Strome and goal-scorer Artemi Panarin. 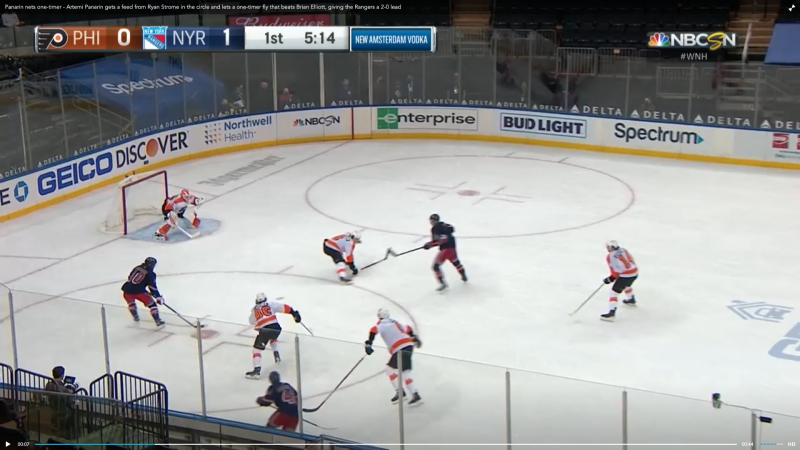 Goal No. 3 – Myers turnover behind the net, Pavel Buchnevich left completely alone in the slot. 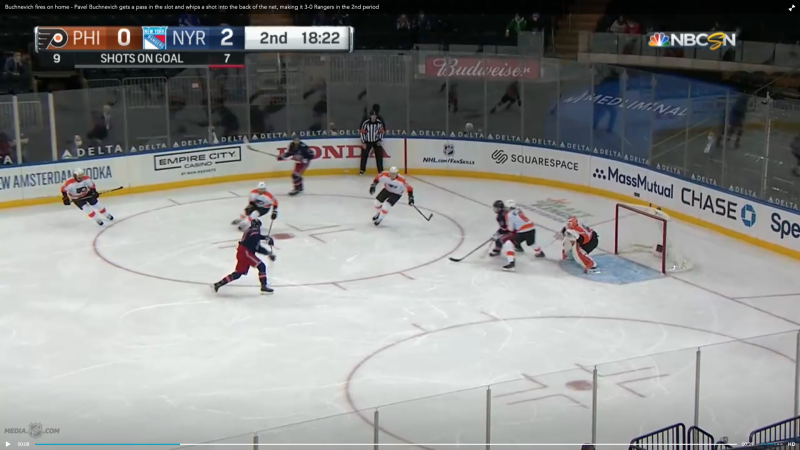 Goal No. 4 – Two Flyers flee the zone too soon as the puck is turned over. Buchnevich has plenty of space and is actually trying to get a pass to the net for Chris Kreider. It goes off Myers’ skate. 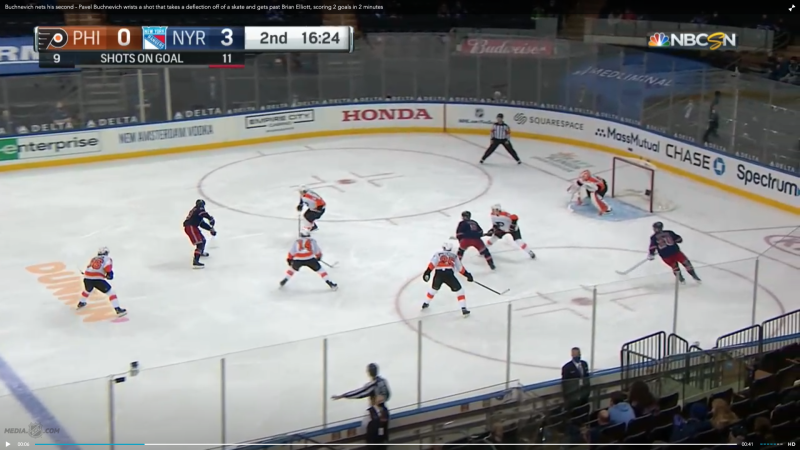 Goal No. 5 – Mika Zibanejad goes in on a potential odd-man rush and waits it out, getting Myers and Connor Bunnaman off their skates and on the ice. He hits trailer Jacob Trouba for the one-timer and the goal. 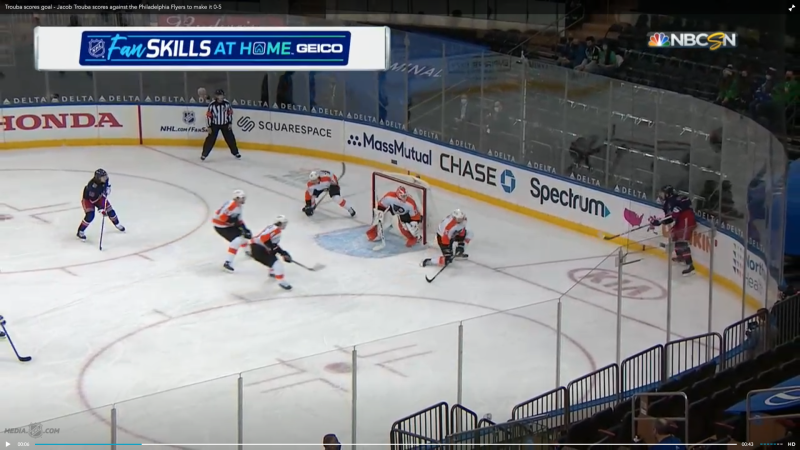 Goal No. 6 – Zibanejad gets a shorthanded breakaway off a blueline turnover by Ivan Provorov, who took a pass from Jake Voracek that was in his skates and never recovered.

Goal No. 7 – A power-play goal where the four Flyers are lined up in a row right along the blue line. Zibanejad speeds through in the open space, receives a pass and goes in on goal alone. 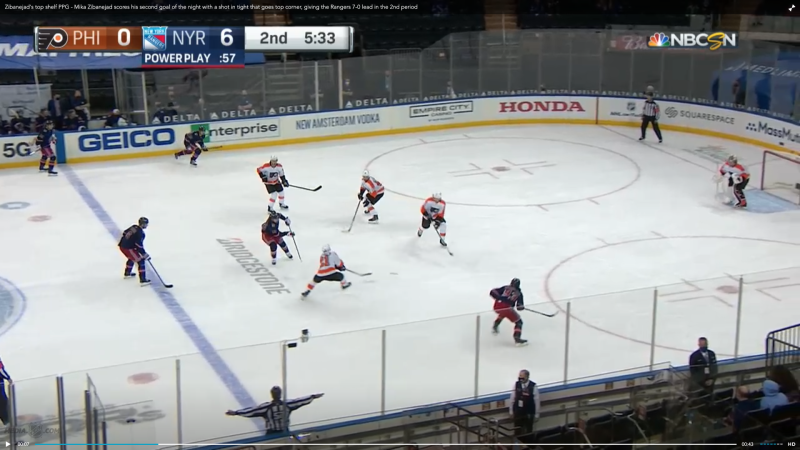 Goal No. 8 – A give-and-go between Zibanejad and Kreider as Zibanejad splits the two defensemen to again get to the net untouched. 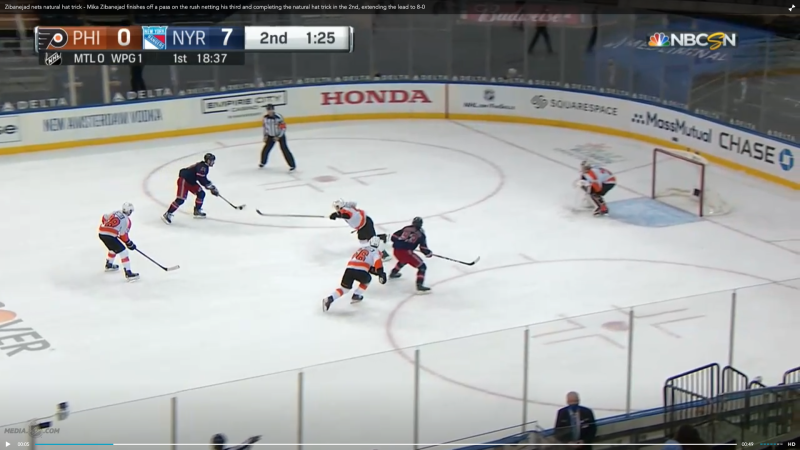 Goal No. 9 – A 2-on-2 rush to center with no backcheck. Libor Hajek comes in as the trailer to create a 2-on-1 and feeds Filip Chytil for the one-timer. 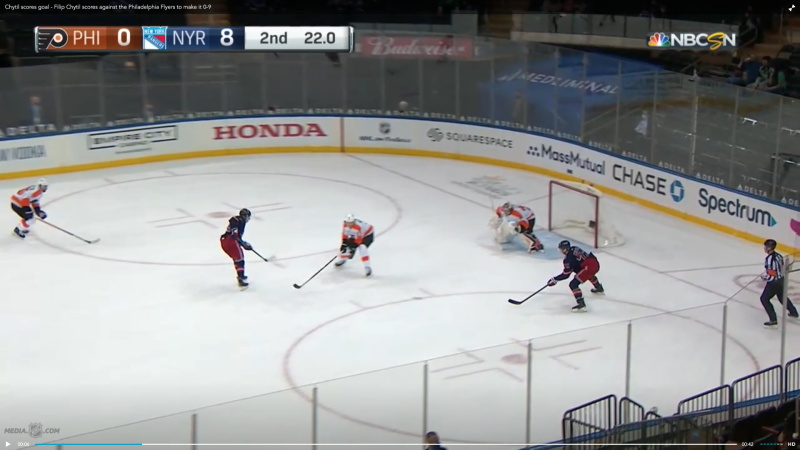 There isn’t a single soft goal in the bunch from a goaltender’s standpoint. Brian Elliott and Carter Hart were both placed on the clothesline and left out to dry.

It’s as embarrassing a defensive effort as it gets. At a certain point, it looked like the Flyers didn’t even care to try to break up scoring opportunities. They just let them happen, as the Rangers moved the puck and executed and won battles and scored goals as if they were an All-Star team.

4. "A Question of Pride and Leadership"

Once it was all over, the frustration from this game was certainly evident. Usually the quotes after a game can seem a bit hollow. There was no mistaking Alain Vigneault’s frustration. Usually more jovial and optimistic about things, the Flyers coach seemed genuinely at a loss with the performance.

Here’s a recap of a brief press conference.

Q: How concerned are you that this performance could carry over into the Islanders tomorrow night?

AV: “No doubt that we weren’t good tonight. We couldn’t defend and couldn’t make a play and got truly embarrassed. We’ll get to Long Island and get ready for tomorrow.”

Q: What did you see from the defense that was the most disturbing part of the game?

AV: “The whole part of our game was bad tonight. We’re going to move on.”

Q: You mentioned the team was trending in the right direction. How do you get from there to this game?

AV: “I don’t really have an answer for you. Nothing about this game was any good. We’re going to throw it out and get ready for the next one.”

Q: Did you have anything to say to the guys or what was the vibe in the locker room at the second intermission?

AV: “There’s not much to say. It’s a question of pride and good leadership and we move on from there.”

Q: What’s the key to pulling yourself out of a performance like this?

Q: Can a loss like this finally flip the switch for some guys and make them realize this is as bad as this can get and you’ve got to turn it around right away?

AV: “All I can say is we’ll find out tomorrow.”

Very short answers, a tone that said if it isn’t fixed soon, there’s going to be further problems.

Alain Vigneault knows what’s at stake on Thursday and in the games that follow. If this 9-0 loss is the first of a lost weekend in Long Island, the season may very well be slipping out of reach for the Flyers already at the halfway point.

I keep going back to before last season. It was the first offseason for GM Chuck Fletcher. It was the first season for Alain Vigneault. It was up to the players to perform. They may have very well exceeded expectations in that first season. This season, they are seriously underperforming in so many ways, and if this season slips away before it even gets to April, it’s not going to be a pretty sight.

Alain Vigneault said it as mentioned above, a short memory is necessary and you move on to the next one. Claude Giroux said it’s a good thing they have another game on Thursday night.

Sure, it’s a good thing if you can bounce back and make this game an isolated incident. But if you can’t…

It’s incredibly fitting that this game on Thursday against the Islanders will be the halfway point of the season. Where the Flyers are right now, this is the moment where they can decide what this season and their future hold. By the end of this three-game series between the Islanders, you will know just about all you need to know.

It all starts on Thursday night. You can come out and take out your frustration and embarrassment on the Islanders, or you can continue to spiral to the point where it is borderline out of control. The choice is on the players.

This game goes beyond must-win. This is for your season. It’s not an exaggeration, it’s reality. You can either show some fight, show some determination, show that you are better than this embarrassment to the Rangers, or prolong the mediocrity that this season has become. And it will be the way the entire organization from the top down responds, whether it be to further trust in this group, make a trade to improve them, make a trade to shake things up, do something out of left field at the coaching level or management level, or simply blow it all up. However it plays out, it will certainly be fascinating to watch.