Eagles Flyers Phillies Sixers About Us Write For Us
Previous month:
February 2021
Next month:
April 2021

The month of March couldn't come to an end soon enough for the Flyers. After all, it featured some listless losses, some embarrassing losses, some comeback wins that didn't translate to the next game, and each was fueled by inconsistent play, poor defensive coverage, lackluster goaltending, and constant puck mismanagement.

How did the Flyers cap off this month? Quite possibly in the most fitting way, losing to a team that couldn't win a game all month long, the only team that seemed to be finding a way to lose games more than the Flyers themselves. It wasn't even a close loss, it was another embarrassment. The Buffalo Sabres snapped an 18-game winless streak as the Flyers closed March with a 6-1 defeat on Wednesday night.

There are many questions about the Flyers future on the blue line, especially given their struggles throughout the season. One piece of that future has been waiting in the wings, first winning a gold medal as the captain of USA’s World Junior team and then making noise in the college ranks with Michigan.

2019 first-round pick Cam York has officially turned professional, signing a three-year entry-level deal that will begin this season. York is expected to start his pro career with the Lehigh Valley Phantoms, but with his contract kicking in this season, the door is open for him to play at the NHL level.

In many ways, Monday's game was still a disaster no matter how you spin it. Perhaps for the Flyers, it was more of a gigantic crisis averted, since a regulation loss to the Buffalo Sabres would have likely put to bed any talks of the playoffs. But the Flyers have some life in that race after rallying for the win. It continues to be about what they do with it next.

That next game comes on Wednesday night, as the Flyers face the Sabres again. The Flyers are continue to try to keep their dimming playoff hopes alive, while the Sabres look to avoid carrying their winless streak to 19 games.

The Sixers would be back in action on Tuesday night, looking to bounce back from a loss to the LA Clippers on Saturday. Next up on their road trip would be potential MVP candidate Nikola Jokic and the Denver Nuggets.

This game would be part five of a season-high six-game road trip for the Sixers, and it showed. The road trip looks to be taking its toll as the Sixers would have a lack of energy for a majority of the contest.

Despite some valiant efforts from the Sixers in the second half, Denver would take this game rather easily. They would pick up a wire-to-wire victory by a final score of 104-95, handing the Sixers their second straight loss.

The Nuggets came out of the gates firing and really set the tone early. They would score 44 points on almost 70% in the opening quarter to bury the Sixers in a deep hole early. This early deficit would prove to be just too much to overcome.

Two key factors stood out from this loss, tired legs and carelessness with the ball. Turnovers have been a weak point for the Sixers throughout this season, and it showed in the first quarter. The Sixers would eventually cough the ball up 11 times, resulting in 13 points for the Nuggets.

Lack of energy would be the other key area that led to the Sixers' dropping this game to Denver. Almost from the opening tip, they looked sluggish and played like a team just trying to survive a road trip. This lack of energy would hurt them most defensively, as it allowed the Nuggets to move the ball and step in wide-open jump shots countless times.

Offensive struggles were apparent up and down the Sixers' lineup. They would shoot just 42.7% as a team, with Tyrese Maxey being the leading scorer with 13 points. Tobias Harris and Ben Simmons would be not far behind him with 12 and 11 points respectively.

Part of these losses can be attributed to playing good teams back to back, but that is no excuse. For a team that has prided itself on its ability to shut teams down defensively, the Sixers have had troubles on that side of the floor for the second straight game.

After playing so well to kick off this road trip, this team is starting to look like a team that is missing its star player.

Looking ahead, the Sixers have one more game to get through before they get to head back home to the Wells Fargo Center. The finale of this road trip will be a chance to get some redemption against a Cleveland Cavaliers team that has had their number this season.

Not the Right Mix, Where Do the Flyers Go From Here?

The NHL regular season still has over a month remaining and the season as a whole doesn't technically end until July, but it’s becoming more and more apparent that the Flyers season, in regards to making a playoff push, is nearly over. Yes, they’re sitting fifth in the East, three points out of a playoffs, still very much mathematically alive. But their defense is in shambles. Almost every core player that was expected to produce on the higher end offensively has shown struggles. The goaltending has been questioned.

To put it simply, the Flyers are a mess right now, and it’s become clear that the current system is just not working.

So that begs the question, what do they do to fix it?

Continue reading "Not the Right Mix, Where Do the Flyers Go From Here?" » 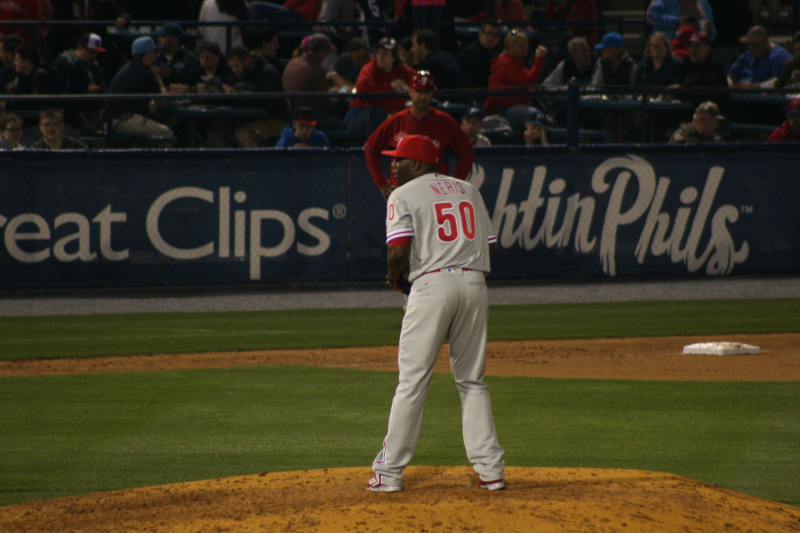 Perhaps one of the only remaining questions regarding the Phillies roster remaining was the question of who would serve as the team's closer.  Phillies manager Joe Girardi has spoken in the past that he hopes for clear roles from his relievers.  The Phillies have used Hector Neris as closer the last couple of seasons, but with the addition of the likes of Archie Bradley and Brandon Kintzler to the roster, the Phillies added two relievers with closing experience.  Girardi made his declaration on Wednesday morning that Neris will keep the role.

In a Zoom call with reporters, including NBC Sports Philadelphia's John Clark, Girardi announced that Neris would be closer, as Bradley and newcomer Jose Alvarado would be in set-up roles.  Alvarado had not closed in the past, but after throwing 102 miles per hour in Grapefruit League action.

Neris first held the closer's role in 2017, saving 26 games.  But 2018 went differently for Neris, who pitched to a 5.10 earned run average and lost his closer's job during the season to Seranthony Dominguez.  In 2019 the Phillies added veteran closer David Robertson to the mix.  But soon thereafter both Dominguez and Robertson were hurt and Neris reclaimed the closer's role.

After years of discussion, the NFL has officially made the move.

Starting with the 2021 season, each team will play 17 regular season games, the league announced.

Beginning in 2021, the NFL is expanding to a 17-game regular season. pic.twitter.com/skNisJwPS2

The extra game the Eagles will have in 2021 will be against the New York Jets.

Times like these leave the masses calling for action of any kind. You certainly got that on Tuesday from the Flyers.

Less than 24 hours after completing a comeback win over the Buffalo Sabres, 4-3, in overtime, the Flyers made an interesting move, placing defenseman Shayne Gostisbehere on waivers.

Gostisbehere, who turned 28 in less than a month, is in his seventh season with the Flyers. This season, he has five goals and 11 points in 25 games with a minus-1 rating.

Even though the Flyers have seemed poised to have to do something in wake of the results this month, this move still came as a surprise. Alain Vigneault noted that it had to do with roster flexibility.

Powder Blue Podcast: Herrera Off Roster, Kingery Down, and Examining the New Bullpen Frank Klose and Geoff Mosher look at the decision to keep Odubel Herrera off of the 40-man roster, out of the major leagues, and the center field situation without him. Also, once-promising Scott Kingery is demoted, and the Philllies decide to press forward with only one left-handed pitcher in the bullpen. All that and more on the Opening Day edition of the Powder Blue Podcast.

What do you get when you put a team struggling through the month of March one season removed from a playoff run that came up a game short of the conference final and a team riding a 17-game winless streak?

The answer came in the form of an exhausting game to even watch. This was a battle royale of mediocrity. This was a game that probably played out exactly as it should have in both result and process.

Yes, the Flyers are a better team than the Sabres. The standings certainly reflect that. But for 40 minutes, they weren’t close to that, so much so that they not only once again dug a hole to the worst team in the league, requiring another frantic third-period rally, but they also had to shorten the bench to do it.

Anyway, here are five takeaways from Monday’s 4-3 Flyers win in overtime against the Sabres.