Eagles Flyers Phillies Sixers Union About Us Write For Us
Deja Vu for Flyers in Another Rout by Rangers
Flyers 5: Takeaways from Thursday’s Flyers-Rangers Game

In spring training’s final days, the Philadelphia Phillies must not only cut the active roster to 26 but also might designate for assignment players they can’t --but would prefer to-- keep. Fortunately and unfortunately, injuries and rehabs can buy the execs up to a month to delay tough decisions.

For the Phillies faithful, a numbers crunch can be confusing, especially if they lack three pieces of information the front office has. Therefore, the locals don’t understand the higher-ups thinking because they believe another move makes more sense. Though, not below the surface.

Like other baseball aspects, making the 26-man roster has annual certainties. Organizational determinations involve money, players with or without options, the choice of two with similar skill sets, injuries and the team’s competitive status. Usually, difficult cuts are last-minute decisions and extremely complex.

Being slightly below the $210 million AAV (average annual value) is management’s preference and can affect final decisions. Presently, carrying Matt Joyce would increase the CBT (competitive-balance threshold) to $209 million.

For some, options unfortunately can lead to an Adam Haseley going to the alternate training site to get at-bats, while Roman Quinn, who has no options, makes the squad. Therefore, expect an uproar from some fans who would blast Dave Dombrowski, president of baseball operations, for a similar move.

Due to injuries and rehabs, Brad Miller and Vince Velasquez may not return until mid-April or later. But Miller’s situation is problematic because the Phils need two reserve infielders. Translation: Ronald Torreyes takes a 26-man spot.

Probable Phillies on the IL (injured list) on Opening Day:

Cuts also depend on the manager’s preferences. Currently, the skipper wants five starters, eight relievers, eight regulars and five bench pieces. Girardi, though, leaves a trail of breadcrumbs through his March approach.

Working the middle innings on the same day separates the potential closers from setup men and others in the relief corps. For the ninth, Hector Neris, Archie Bradley and Jose Alvarado are competing.

Unlike the closer battle, setup men Brandon Kintzler and Watson* toed the rubber consecutively in the fifth through the seventh frames. Basically, one slot on the 40-man roster will eventually involve a cut. But Ramon Russo, like JD Hammer, could pass through waivers. (* Opted out on Mar. 26.)

For two remaining bullpen seats, Connor Brogdon, Jojo Romero and Sam Coonrod will compete, and the red pinstripes could activate Velasquez as a potential long man to replace David Hale. And keep in mind, the Phillies are Coonrod’s second club: the San Francisco Giants. They didn’t keep him.

For now, the Fightins will probably stretch out Velasquez and Spencer Howard in Allentown. But Velasquez could rejoin the team around mid-April, while Howard will get seasoning at Triple-A when the International League begins. Yes, the Phils will need spot starts from both even if no injuries occur.

Miller was going to man infield and outfield positions, but Joyce can only cover the corner outfield grass. Realistically, Ronald Torreyes, like Scott Kingery, can handle the keystone, short and the hot corner. So Torreyes can temporarily fill Miller’s slot.

While Haseley could get at-bats in Allentown, Joyce could occupy his spot until mid-April, but the competition for playing time and roster slots doesn’t end on Opening Day. Plus injuries will still allow the red pinstripes to have a 27th and 28th man with plenty of opportunities to shine.

Probable Phillies on the IL (injured list) on Opening Day:

Presently, some Fightins are not healthy or haven’t had enough preparation time: Miller, Velasquez and Haseley. In the pen, Romero, Brogdon and/or Coonrod can go north, while Hale could continue into April with Velasquez on the IL.

While Haseley is getting swings in Allentown --if the Phils go that route-- Joyce will head to the Bank. However, the red pinstripes could designate Russo for assignment and also carry Herrera, plus they could eventually cut Coonrod or an MiLB marginal prospect to have both outfielders on the active 26.

If the franchise has 26 healthy players, two of the above Phillies won’t have a slot. Ergo, Herrera could play in Triple-A. For now, Joyce will eventually need Russo’s 40-man spot, but another minor leaguer could go instead.

The bottom prospects on the club’s top 30 are southpaws: an exec’s preference. However, one possibility is righty Bailey Falter, who isn’t on the Phils’ top 30 and went 6-5 with a 3.84 ERA in 2019 during 14 Double-A starts. But what mind-changing information does management have regarding my take? More than three pieces!

The Phillies March to May 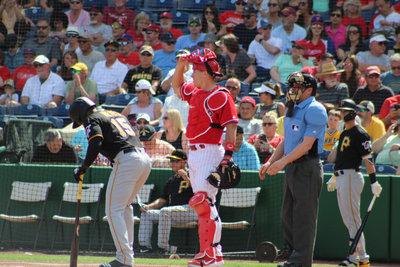 Tal, Some of these guys have been deep in the organization. I cant keep track. You need to put this on an EXCEL sheet. :). Joyce is a seasoned player but not at the peak of his career. Maybe the Phils can be the spark.

The only minor leaguers that matter are those on the 40-man roster. And the bottom rungs have 2-3 southpaws, but Falter isn't among the organization's top 30 prospects.

Basically, there's no reason for a deep dive into each because the situation and info are fluid. In fact, OF Simon Muzziotti hasn't arrived in camp due to visa problems, so they put him on the restricted list to open a slot. It shows one piece of info no writer had or saw coming. It's kind of like Area 51: you can only get so close. For some info, you have to be in the room. Ergo, an employee.