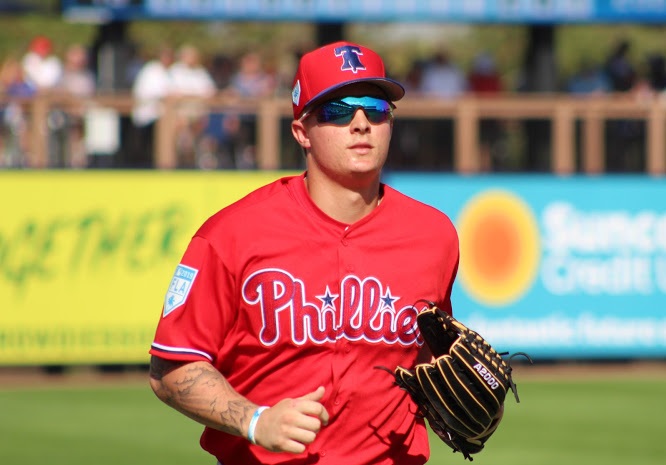 Mickey Moniak almost became an afterthought.  The Phillies used their first overall pick in the 2016 MLB Draft to select the high schooler out of Southern California.   Moniak found himself on the Major League roster in 2020 briefly, but by the offseason he had found himself buried on most prospect lists, becoming a near afterthought.  The Phillies optioned Moniak to the Alternate Training Site on Tuesday night, but he has opened eyes this Spring and worked his way back into the discussion about the future.

The Phillies had an open battle for center field this Spring.  It appears that Adam Haseley and Roman Quinn will once be handed the center field duties in 2021.  But Moniak, entering Spring seemingly as inventory on the roster, got himself into the discussion.  Moniak batted .273 on the Spring, with two home runs and an OPS of 1.173.

The Pandemic hurt many minor league players in 2020.  Moniak, who would have began 2020 at Triple-A Lehigh Valley, instead spent most of the season not playing.  He eventually joined the alternate site in Allentown before finally making the Phillies roster.  Moniak had 14 at bats with the big club in 2020, batting .214.

The last real memory Phillies fans have of Moniak is when he batted .252 over a full Double-A Reading season in 2019.    While the batting average itself does not look particularly impressive, Moniak seemed to get better as the season went on.  But that was not enough for many to remember that Moniak is a prospect.

It feels like ages ago, but when the Phillies drafted Moniak, he had just turned 18 years old.  The following year's first round pick,  Haseley, spent three years playing college ball at Virginia before the Phillies selected him seventh overall.  Haseley is two years older.

The Phillies have left field opening, too, as Andrew McCutchen is set to become a free agent.

So the Mickey Moniak story is not over just yet.  In fact, it may finally just be beginning.