Eagles Flyers Phillies Sixers Union About Us Write For Us
Leddy Nets Only Goal in Flyers OT Loss to Islanders
YWT: The Philadelphia Flyers Podcast - YWT #113 - Know Your Role

While some Philadelphia Phillies fans have swung like a pendulum from the first 13 games scheduled to a first-place start, and then --based on three defeats-- they veered negatively past their Opening Day’s expectations. So, a 6-6 mark was unacceptable because splitting the contests is only reasonable on the surface.

For one Phillies youngster, the seventh-inning setup role is open, and an unlikely second candidate could be center field’s answer. But even though either player could do it, these unexpected breaks could determine the success of their careers because another shot doesn’t have a guarantee.

“Opportunity is missed by most people because it is dressed in overalls and looks like work.” - Thomas A. Edison

Predicting third place in the National League East to many locals is a possibility with minimal disappointment, although the normal ups and downs of ‘21 will lack consistently winning two of every three games. Realistically, only the 2011 Phillies with four aces coasted to 102 triumphs. Once-for-this-team rare!

Despite the sky-is-falling cloud, the Fightins have five center fielder defenders who won’t embarrass themselves glovewise. But you’d never know it because locals magnify any misplay, real or perceived.

Recently, the Phils had three straight losses, and some were giving up on them, while others were in a questionable panic where only an acquired center fielder could salvage the season. But this anxiety contradicts some fans’ expectations, and plugging the hole wouldn’t change what some have anticipated since March 31.

If the red pinstripes picked up a solid center fielder after only 15 contests, what would change? Yes, everybody knows the answer even if it’s subliminal. Translation: Find the next weakness and hammer it. Would it be David Hale, Vince Velasquez or Matt Moore?

With the leather, the Phillies have five outfielders competing for center field, and they can handle all three grass positions. But two would be more valuable as corner defenders: Adam Haseley and Odubel Herrera. And even though they could man center field, the other three are preferable.

Eight-hole batters usually have a low average and provide limited run production. However, MLB supporters are bemoaning hitters --even stars-- who are below the Mendoza Line. In Philadelphia, though, locals are pointing to the bottom rung as if it’s critical to avoid the basement.

Depending on their needs and finances, front offices build their club during the offseason and reevaluate their squad based on disappointments, injuries, surprises, and their possibilities after three months. So, in-house personnel will receive an opportunity if a starter, regular or reliever doesn’t deliver the expected results.

In center field, five players have a shot. Currently, Herrera is at the bottom because he would require being on the 40-man roster. And he hasn’t played frequently in the last two years due to his suspension and the pandemic. So, he’ll probably spend May and June at Triple-A.

Barring an emergency call-up, Scott Kingery will probably be at Triple-A with Herrera. Realistically, the six-position player has bad habits to correct before returning to the Show’s pressure. And franchises don’t abandon their investments with fanlike quickness.

Why is Roman Quinn still here? Well, he’s a solid defensive replacement. And he can pinch-run in the 10th inning for the man at second base and score a winning run more easily. Expect him to be a bench piece.

The favorite was Haseley for 2021 because he hit .266 and .278 in 2019 and 2020 respectively. Fortunately or unfortunately, he may be the left fielder in 2022 because Andrew McCutchen will be a free agent at season’s end. For now, though, his undisclosed personal matter has him on the sidelines.

March’s surprise and a candidate for center field in ‘22 is Mickey Moniak. Yes, armchair GMs wrote him off long ago because some expect a number-one selection overall in the MLB draft to make an immediate impact. But most high school prospects don’t hit .300 at Double-A by their third summer.

According to Jim Sannes of numberFire from an older article, 58 percent of number one draft selections from high school make it to the majors like Moniak. And it takes those youngsters five years in the minors: ‘20 was Moniak’s fifth campaign: a lost season for minor leaguers.

If a college-signed player averages .252 at Double-A in his fourth summer, it wouldn’t indicate a potential major leaguer. So, some considered Moniak a wasted top pick when he produced that average in his fourth year: management’s incompetence, no? But high schoolers don’t progress like collegiates during MiLB development.

Now, Moniak can determine his fate if he can hit .250 in the eight hole and provide reliable defense. He will get at-bats and mostly face right-handed pitching. Yes, it’s doable.

Due to an oblique injury, Archie Bradley will be out for four weeks, and veteran Brandon Kintzler or rookie Connor Brogdon are the seventh-frame candidates. But a successful reliever earns high-leverage situations at the bullpen’s back end. Initially, five good outings are only a JoJo Romero.

Kintzler, 36.5, was the Miami Marlins closer in 2020: 12 saves and a 2.22 ERA during 24 appearances for 24 ⅓ frames. And if skipper Joe Girardi had no other options, Kintzler would be a dependable fill-in for Bradley. And he still might handle some or most duties.

Receiving more challenging assignments, Brogdon has earned the manager’s trust since his second stint with the parent club in ‘20. And his six-game dominance in 2020 has continued for his first six appearances in 2021 including a 10th-inning performance. That stated, he isn’t ready to be the closer.

To sum up, will Moniak and/or Brogdon take advantage of these golden opportunities? And will success offer a glimpse into their situations for 2022? True, some have Moniak as a bust and Brogdon as the new closer, but what are they in ‘21? Rookies! 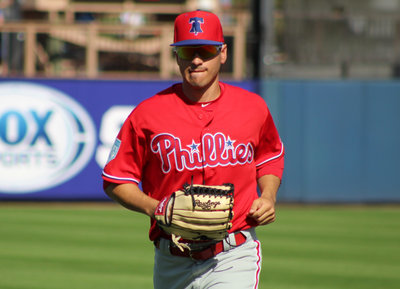 Whoever wrote that phony crap is a real company man. Herrera should be starting.The crime he committed he has paid for X 10. Lets' face it .Philly ownership/management isn't big on Latinos.Hey for nothing they shipped off Hernandez,Galvis and Franco and now Herrera is evil.Their Latin scouting department sucks.Most of the good young players in MLB are Latinos.This all started with Ruben Amaro Sr.

Your comments indicate your problem is with my assessment of how management views Herrera's situation with the team. In fact, I wrote earlier in spring training that Herrera was the likely center fielder, but he was hitting at the time. By no means is he out of the picture. Center field is not a settled issue.

Galvis was traded in his last year before free agency, and that is common in the MLB.

The Phils didn't re-sign Hernandez and Franco because their arbitration amounts were double their market value. Hernandez's arb # was $11.7 million, but CLV signed him for $6.25 million, and they only offered him $5 million as a free agent.

If there was any bias, it was the color green.

But, again, thanks for reading.