Fans’ Free-Agent Picks for the 2021 Phillies

During the offseason, the Philadelphia Phillies faithful had no shortage of preferences for the bottom two rotation slots. And even after Dave Dombrowski, president of baseball operations, had inked two starters, some voiced disappointment for the hurlers who signed elsewhere. Their if-only thinking!

Some Phillies fans will always expect more from regulars, relievers and every-fifth-day moundsmen. But if you’re the counted-on player for a solid 162, you’d put in hours with the determination to succeed, no? Well, their talent and effort will frequently fall short of their expectations.

Because some locals are micro-analyzing performances after 20 games, how would they rate their preferences for the five-man staff? Remember, the hurlers you wanted were James Paxton, Chris Archer, Corey Kluber, Adam Wainwright and/or Taijuan Walker.

Currently, some believe Matt Moore is already unacceptable, and Vince Velasquez --who had disappointed some locals after his first relief appearance-- replaced him for one outing. But some fans probably already considered the start would be an unsatisfactory performance beforehand.

The Fightins spent $11 million for Chase Anderson, Moore and Velasquez. As for locals’ preferences, those starters received contracts from $6.5 million to $11 million each for this campaign. However, Walker’s deal was $23 million for three summers or $7.7 million AAV (average annual value).

Anderson’s innings were four, five, and four with a pinch-hitter before a probable fifth frame in his third appearance. So, he has been adequate for a five-slot arm with a 4.15 ERA at $4 million, while some would gripe about Velasquez with those numbers.

Moore has drawn local ire due to 11 innings for three starts with 13 runs (12 earned), but he’s now on the COVID-19 IL (injured list) with lefty setup man Jose Alvarado and infielder Ronald Torreyes. Though, many clubs don’t give details regarding infected players or those in contact with same; ergo, more information is unavailable.

Many locals either were unaware of Paxton’s injury history, or they were gambling on good health. Moreover, he returned to the Seattle Mariners for $8.5 million. Translation: Their plan was a healthy, effective Paxton would fetch a nice haul at the trading deadline including a $4 million savings on his pact.

The unsuccessful risk was $8.5 million for 1 ⅓ innings because Paxton will now have Tommy John surgery, and he’ll be a free agent again. Then, he’ll provide a showcase for major league franchises, and some fans will again point out he’s a solid two-slot pitcher when he’s healthy. More if than when.

Every season, Archer’s talent is tantalizing to big league supporters, but he hasn’t harnessed his natural ability with the Tampa Bay Rays or for pitching guru Ray Searage when he was with the Pittsburgh Pirates. And even though Archer has a recent injury history, the Rays are taking another shot for $6.5 million.

The right-hander missed 2020 and half of 2019 with neck surgery and shoulder inflammation respectively. Now, he’s again on the 10-day IL with right lateral forearm tightness after only two outings: the first in relief and the other as a starter.

Even though Kluber has totaled 37 ⅓ frames for ‘19 and ‘20 combined, the New York Yankees signed him for $11 million with the hope he’d produce two-slot stats for a risky but bargain price. To date, though, he hasn’t completed the fifth inning nor had an acceptable performance.

Basically, the Yanks’ strategy is to be under the $210 million CBT (competitive-balance threshold), and they are currently under it by $2.5 million AAV. But achieving this penalty-resetting goal has left them with Gerrit Cole and four rotation question marks.

As spring training was drawing closer, some fans began considering Wainwright. But he re-upped on Jan. 29 for $8 million with the St. Louis Cardinals. Shortly thereafter, though, the red pinstripes signed Moore on Feb. 3 and Anderson on Feb. 8 for $7 million total.

After a disastrous first start, Wainwright has had two good performances and one poor outing: a 2.64 ERA for those three. Apparently, Uncle Charlie --a nickname due to his famous curveball-- still has some bullets remaining.

Walker was the rotation piece I frequently mentioned as an example for $8 millon AAV for two campaigns. And if the Phils had acquired Andrelton Simmons, their reported first choice, for $10.5 million and Walker for $8 million AAV, it would have been $18.5 million instead of $17 million for Moore and Didi Gregorius.

Walker’s numbers look good on the surface, but he is averaging 7.07 walks per nine frames. Granted, he’d be better than Moore, but he has a player’s option for a third year. And if he struggles, the New York Mets will eat a third summer;  but if he thrives, he can leave for a bigger payday after two seasons.

Many armchair GMs were critical of some deals and saw their preferred hurlers going to other teams. And remember, Dombrowski is under the $210 million CBT by only $3.5 million AAV. But before you criticize him, don’t forget you had other preferences. How are they doing? 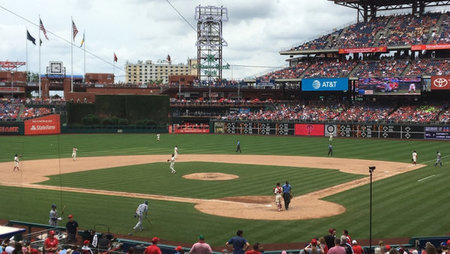