Eagles Flyers Phillies Sixers Union About Us Write For Us
Shake Milton Erupts in Blowout Win Over Cavaliers
What will Howie do at 12?

The usual ritual at March’s end is the upcoming season’s forecast, and the Philadelphia Phillies are currently in the most competitive division. However, every contender is one major injury away from an endless summer and unhappy fans, who don’t want to wait until next year. Get a real GM!

When some Phillies faithful point to their rivals’ strengths and the Fightins’ shortcomings, victory becomes virtually impossible. Translation: Their foes’ personnel will live up to expectations, while the local nine will regress to career disappointments. But each campaign has surprises, injuries and rough patches.

“I'm going to make a prediction - it could go either way.” - Ron Atkinson

Frequently, some national predictions will change during the 162 because of injuries, unexpected disappointments, surprises, and July acquisitions. Plus forecasting involves number crunching, and there is no formula for the human element: The Atlanta Braves.

Some head-shaking moves have explanations below the surface. To illustrate, the Phils assigned JoJo Romero to their minor league camp because he had frequently fallen behind in counts. And Tony Watson’s $3 million deal had called for earning a spot in camp, not his track record: He had to pitch like it counted.

General rule: Deep-pocketed organizations prefer to be close to but not over the CBT (competitive-balance threshold) of $210 million AAV (average annual value). And Watson would have put the Fightins over said amount. Therefore, he, Brandon Kinzler and Matt Joyce had to produce.

Pitch counts for ‘21 require management’s input, and adding 100 innings to the previous season is the belief of two clubs. After last summer, one team expects 100 innings from a hurler who tossed four frames, and another anticipates 140 innings from a starter who worked 40 frames.

During 2020’s downtime, Aaron Nola worked simulated games for arm strength and endurance. Watching spring training contests, you may have noticed a starter going to the bullpen to throw 15 more pitches. Basically, he didn’t reach the planned number during the exhibition game.

Estimators expect less innings from Matt Moore due to stronger competition, and they’re anticipating Chase Anderson to miss time based on average frames per 162. Ergo, David Hale and Vince Velasquez are on the active 26 for multiple innings, and Spencer Howard reportedly will work in relief after a call-up.

The relief corps has three categories: closer, setup men and middle relievers. But while Hector Neris begins as the closer on a short leash, he might --might-- bounce back due to adding a slider. For now, though, Archie Bradley and Jose Alvarado, who needs improved control, are in setup  roles.

Although the lineup is similar, Andrew McCutchen is healthier, Jean Segura’s hustling is noticeable; and Roman Quinn being a switch-hitter won’t just face occasional left-handed starters. Meanwhile, the red pinstripes want Scott Kingery to regain his confidence and force a call-up.

The shiny, new object is a change in ownership and approach by the New York Mets, but will it help their recent fortunes? Meanwhile, the numbers don’t favor Atlanta, but they have a clubhouse atmosphere going back to Chipper Jones’ days: Disappointing teammates isn’t acceptable even with 2020’s injuries.

The Braves batting order is strong, but third sacker Austin Riley will hit home runs with a low average. Unfortunately, the lack of a universal DH will be a defensive problem for left fielder Marcell Ozuna. And keep in mind, they also have a habit of coming from behind more frequently than most.

When Mike Soroka returns in late April, they will have a solid front three, a rookie and ex-Phillies starter Drew Smyly. Remember Smyly? And will Will Smith be the dominant closer he was in 2019 this somewhat normal campaign? Or was ‘19 a career year for the southpaw?

The Mets rotation will be stronger when Carlos Carrasco returns near May’s end, and they have two portside youngsters on the five-man staff for now. Moreover, Noah Syndergaard will rejoin the squad in the second half; however, he will be a free agent in the offseason. But, again, their pen is questionable.

The Metropolitan’s bats are formidable and costly. Next season, Robinson Cano will add another $20.25 million AAV, and how will negotiations turn out for Michael Conforto and Scott Boras? As for defense, left field and the hot corner are current shortcomings.

Beginning with multiple roster decisions, the Washington Nationals have three COVID-19 positive players, two isolated teammates and concerns for their active roster. Rotation-wise, their front three will again be solid, but their bullpen is questionable beyond Brad Hand and Tanner Rainey.

Improving their offense, the Nats added first baseman Josh Bell and left fielder Kyle Schwarber and will score more runs at their defense’s expense. So the plan is to have their front three work seven frames each and minimize their pen usage. Meanwhile, their hitters could plate more runs than they allow.

After locals bemoaned losing Sixto Sanchez and Jorge Alfaro for a free agent, the Miami Marlins are looking for another catcher. And so-called ace Sanchez --out until April’s end-- isn’t better than Cole Hamels or Tim Lincecum, has control problems; plus clubs he had dominated had no difficulty with him the second time around.

After bottling lightning in ‘20, the Fish are still a cost-conscious organization with youngsters who will face more opportunities for peaks and valleys during a full 162 than a 60-game schedule. Therefore, a hot April probably won’t be sustainable.

While some locals will find plenty to gripe about besides Neris’ first blown save and every inning that’s not 1-2-3 thereafter, they will also point out the team’s every wart frequently. Basically, if the Fightins are hot in September and have a realistic playoff shot, what would be the hardest thing for fans to believe? October Phillies baseball! 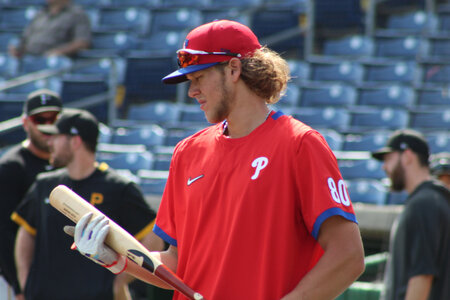