From your comfortable easy chair or seat at the Philadelphia Phillies home, the game appears easier than it is. But the batter, catcher and umpire have a view even those in the first row exactly behind the plate don't.

Even though an opportunity presents itself, this Phillies fan can only understand one piece of the jigsaw puzzle until additional information is available. However, the situation of having a smoked ball coming directly at you is an unforgettable experience, but it’s a common occurrence between the lines.

“The eye sees only what the mind is prepared to comprehend.” – Robertson Davies

The faithful can cure a flaw or a slump with ease: See the ball, hit the ball. To some, the solution is elementary, and they wonder why so many stars have any difficulty. Basically, a hitter can fail at a 70 percent clip even if he mostly puts the ball in play. A kid’s game, no?

Frustration is the view from a distance when a player doesn’t immediately correct what obviously isn’t working. To paraphrase Willie Mays, though, if he knew what he was doing wrong he’d fix it, but that’s why he needed a coach to find a small mechanical flaw in his hitting approach.

Some locals have expectations so high they qualify as wishful thinking. In fact, even Mickey Mantle in the broadcasters’ booth stated it looked easy from there, but he knew otherwise. Unfortunately, spectators have one view alone.

Though I was young, I was not immune to the sights, sounds and smells inside the Green Cathedral: I was in awe. In those days, there was no protective netting, and the field’s closeness was the same for those in the dugout. But I didn’t think to bring my glove due to game-day excitement.

Over time, my only regret with baseball was never taking home a souvenir. Today, I can see youngsters catch a home run ball and imagine them getting it signed by their favorite star during a Fightins’ victory. But, realistically, even picking up a weak foul ball off any opponent’s bat from the floor isn’t common either.

If ever a slugger had that look, Willie McCovey did. He was tall, muscular, huge, and intimidating: 6’4” according to his bio. Yes, the Giants have honored him by naming the San Francisco Bay behind the right field stands as McCovey Cove.

McCovey pulled a laser shot directly at me. And since radar guns have measured fastballs, I’ve believed the bullet off McCovey’s bat was 100 mph: The way a hitter sees it. But it became the ultimate baseball experience for me during a spring training radio broadcast in 2019. Ergo, a gift.

When Kevin Frandsen, Phillies away radio personality and former utility man, explained the difficulty of facing Hector Neris, the color man referred to the late drop of Neris’ splitter as staying in the tunnel almost as long as a fastball. Therefore, this makes Neris difficult to hit because it could be either of his pitches.

By concentrating only on the ball, the out-of-focus circular area around it creates the optical illusion. In my frozen state, it appeared to be in slow motion, and I couldn’t distinguish height or movement. The guy next to me stood and deflected it off his bare left hand into the crowd, while I eyed the ball to his hand.

Guesswise, the ball was rising by four feet and slicing by almost five feet, but I was unable to determine the difference. That stated, a batter can judge the height when the ball is leaving the hurler’s hand. But if the ball has movement, hitters are toast and guess where it might be with minimal results.

Tracking the ball is the only approach I’ve noticed to combat the ball’s movement. And if you remember, Chase Utley employed this technique to study which quadrant of the strike zone the pitch would be in. Also, Pete Rose followed the ball into the catcher’s mitt.

According to Gary Mathews, he wouldn’t know what to tell a player who couldn’t hit a fastball: Many batters have to start their swing when the ball is coming out of the hurler’s hand. So, when the ball drops out of the tunnel, an attempted check swing is usually the outcome.

Neris’ splitter doesn’t have the telltale red dot of some breaking balls like a slider. Basically, the spin reveals the red stitching in that form. In fact, Ricky Botallico, former Phillies closer, once mentioned he had thrown a one-finger slider to eliminate that tipoff.

Matt Stairs, a hero in red pinstripes, during a television broadcast pointed out Brad Lidge’s toe tap indicated his slider. Translation: Any information the batter can use is essential. And it’s hittin’ time according to Darren Daulton when the rotation’s bottom slots are on the hill.

When a moundsman hangs a breaking ball, the batter can launch it over the fence. But what do you rarely –rarely– hear the broadcaster state after any home run call? It was a good pitch! 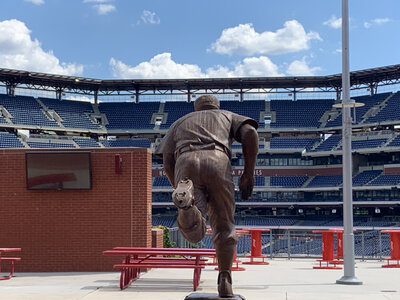