While some Philadelphia Phillies fans judge their franchise and rivals by their rotation and offense, they can sell their relief corps and defense short. Especially bullpens! According to baseball men, though, teams need a pen to win a championship; and one takeaway is also a divisional title or a wild card.

The Battle of the Pens:

The Phillies faithful overall harbor almost the same beliefs from one season to the next. Basically, it’s almost as if they can’t fathom being incorrect, life’s distractions prevent them from closer examination, and/or they’re only willing to accept minimal changes to their beliefs.

“Never underestimate the power of the human mind to believe what it wants to believe, no matter the conflicting evidence.” - Brian Herbert

Fans come in two types --here and elsewhere-- one is the pessimist who searches out every flaw to cushion defeats. Every 162, though, most organizations lose at least 60 games: Winning can sometimes be more relief than celebration as contests mount.

I was an optimist (now neutral): hoping for the best outcome beyond being reasonable. Yes, some can even expect a World Series victory despite the obstacles and luck involved in said possibility. For now, 2021’s hot start is fuel for optimists. But before I covered the Phils, here were my beliefs.

Since I’ve been there, I realize how far off base I was. Now, I let baseball men tell me their view from the front office and from the field, not the cheap seats loaded with “experts.” And I discovered what and why their expectations are apparent. Ergo, I only put pieces of information together like a jigsaw puzzle.

While many fans base a club’s chances on their five-man staff and offense, baseball men believe no team produces a championship without a bullpen. However, catching the ball can also be an overlooked element because it’s not jazzy enough.

The final three innings are the most noticeable because it’s critical to hold a lead or stay within striking distance. So, a bad outing stands out more in the ninth than the fifth. Management: They expect four out of five acceptable performances or 75-80 percent over a full campaign.

Low-leverage situations belong to middle and long relievers, who want to impress decision-makers and earn more important roles. And if the arms at the back end fall short of expectations, these hurlers will be ready for better paying opportunities.

Other than Hector Neris at the back end, now you’ve somewhat experienced Jose Alvarado and Archie Bradley to realize some strengths and weaknesses. But keep in mind, low-intensity frames by middle-inning moundsmen aren’t the same.

The Atlanta Braves have a solid pen --although left-handed heavy-- and are therefore the most difficult divisional opponent the red pinstripes must overcome. Basically, they have Will Smith, Chris Martin and six other reliable --if not spectacular-- relievers.

In their first series at the Bank, the Braves bullpen allowed only three runs (two earned) over 10 ⅔ innings. So, combining their relief corps with their offense, rotation, and determination means the road to the National League East pennant runs through Atlanta.

Defensively, the Mets have problems at the hot corner, left field and second base. So when a club makes too many fielding miscues and throwing errors, even the best pitcher in baseball, a $341 million shortstop, solid hitters and starters will have results limited in the W column. Fear them not!

The Washington Nationals have had bullpen issues even before and since their Fall Classic victory run. Now, they have Brad Hand, Tanner Rainey and question marks due to health or effectiveness. Plus COVID-19 and MLB’s protocols could expose this deficiency even more.

On the diamond, the Nats new left fielder and first sacker are defensive liabilities, but at least they make their lineup more formidable. However, their front three starters can’t toss seven frames every fifth day. Translation: Don’t expect them to bottle lighting again.

Bradley is okay, and Neris has mostly been good even with an acceptable bend-without-breaking appearance. Yes, everyone wants a stress-free ninth, but that isn’t the major league norm.

If you envision Alvarado as the heir apparent to the ninth inning, he could possibly make you more nervous than Neris even during room-for-error opportunities. Then again, he may be closing in June if --if-- he can control his arsenal.

To sum up, the Phillies are solid with Aaron Nola, Zack Wheeler, Zach Eflin, and plenty of offensive firepower. Plus their defense is satisfactory, and they have capable relievers to mostly keep their opponents off the scoreboard. Ergo, underrated! 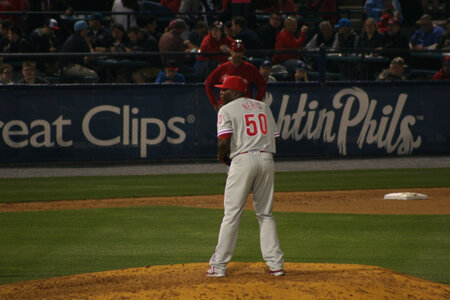