Eagles Flyers Phillies Sixers About Us Write For Us
Week 7 Preview: Union vs. DC United
Week 7 Recap: The Luck of the Union

2021 Phillies: Trading for a Starter

In six weeks, Dave Dombrowki, president of baseball operations, will finish reevaluating the Philadelphia Phillies rotation. And if --if-- an in-house candidate doesn’t claim the fourth slot, he’ll acquire, perhaps, a salary-dumped arm from an out-of-contention franchise.

Competing on the highest plateau requires maximum effort including preparation, mental strength, and a pitcher’s good luck because each level is more psychologically demanding. To illustrate this game speed, Joe Wilson, a college senior, isn’t batting; but Freddie Freeman is with Ronald Acuna Jr. on second base.

“I remember going from rookie ball to A, to double A, then to triple A. At every level it seemed like the game was faster. The bigger the situation, the more the game speeds up. That's all mental. It messes people up.” - Derek Jeter

According to a retired American League general manager, a player makes an impact in or after his third year. So, 30 starts equals one season, and the ceiling would be 105 for 3.5 campaigns. Plus the hurler’s development then represents his status for even the starting staff’s bottom rung. Ergo, not a small achievement!

The Phillies faithful and other major league supporters expect a player to make an immediate impact, and they are especially critical of top prospects. In summers long-ago, stars spent a season at each level and were ready for the majors. But then there were 16 clubs, not 30.

Even though the number of teams nearly doubled, the top talent did not. Basically, many high school and college athletes participate in multiple sports, and they may prefer another or a faster rise to the professional ranks. Translation: It forces MLB organizations to fill roster spots with players receiving on-the-job-development.

Reality, perception and expectation are three separate distinctions, but adding a layer of emotion and/or wishful thinking alters the equation. Obviously, a Triple-A starter with a sub-1.00 ERA won’t be there long because most parent clubs have immediate needs. But what about the other MiLB pitchers?

Unlike obvious studs prospering after 23-24 outings, Aaron Nola needed 60 performances (two full campaigns) before being an ace. Surprisingly, he exceeded the Fightins’ mid-rotation expectations by dedicating himself to perfecting his craft.

Phillies Rotation (through May 23):

Zack Wheeler’s career path is similar to Nola’s except for taking 2.5 years, but Nola was also more effective during his first two summers. Like Nola in Triple-A, though, Wheeler had a 3.93 ERA in the hitter-friendly Pacific Coast League to Nola’s 3.58 ERA (International League).

The three through five spots on a five-man staff are in the “90 to 105 starts” range. And while Zach Eflin could have achieved his mark sooner than 84 appearances before ‘21, the pandemic interrupted his progress last season. In fact, he appears ready to be a two-slot moundsman rather than a mid-rotation piece.

Phillies Starts (through May 23):

Of the four bottom-rung hurlers, southpaw Matt Moore is currently on the IL (injured list), and Vince Velasquez has claimed his spot by being a pitcher, not a thrower. Permanently? Well, Moore had three clunkers (a 9.82 ERA) before previously being on the COVID-19 IL.

After suffering through 1 ⅓ innings, Chase Anderson charged with eight runs (all earned)  --David Hale allowed two inherited runners to score-- had this debacle after seven mostly marginal appearances. Baseball 101: This unacceptable result equaled a demotion to the relief corps.

Replacement-wise, Spencer Howard started on May 16 and went four frames (58 tosses). But the plan originally was 80 pitches before he would join the Phils’ five-man staff. In his three MiLB starts, though, Howard has worked two, three, and four innings respectively; and he needed a fourth outing to accomplish an 80-pitch goal.

Agreeing, perhaps, with some front-office input, manager Joe Girardi and his coaches decided on Velasquez’s health and Howard’s readiness. Saturday night, Howard worked three innings (68 pitches) and allowed two runs (both earned) in his first 2021 start for the red pinstripes. Next outing in Miami!

Phillies Starts (through May 23):

My first inkling of Eflin’s potential was in 2017, and I published articles about him then. Each summer since, he’s grown and 2020 was probably his impact timeline. As for Velasquez, I’ve stated the determining point would be 105 starts, and he entered this new phase at 108 outings.

Doubting Thomases will wait for a clunker to claim their appraisal’s correctness, but even now a poor inning is enough to reinforce negativity regarding Eflin. On the positive side, Doc Halladay, Hamels and Cliff Lee had 4-6 debacles per 162 or one every 6-8 starts. Presently, Nola has two in ‘21 to Wheeler’s one.

The difference between Halladay, Hamels, Lee, Nola and Wheeler to Eflin and Velasquez is perception. Basically, the first five have earned an occasional bad game, but Eflin and Velasquez for some did not produce quick enough for a clunker every fifth appearance. And some with bad first impressions ignore their development.

Because I’m not trying to change any minds, I don’t expect that. No, even if Velasquez produces as a solid four-slot arm for the entire 162, there are many qualifiers like luck for his detractors to fall back on. But after he had a 16-strikeout, three-hit, complete-game shutout with no walks on April 14, 2016, he had growing pains.

In ‘16, Velasquez had his superb performance in his ninth MLB start because his fastball dazzled the San Diego Padres. But he didn’t have quality secondary pitches, and the league caught up to him. Hopefully, Howard won’t suffer the same fate of a sterling outing before he can make an impact down the road.

A healthy Velasquez can continue his good streak and build up arm strength to go six frames. Realistically, the opposition is still expecting four-seam fastballs, not changeups or sliders. Those were the offerings they got from him in prior, crucial situations. So, why in one word are things working now? Unpredictability! 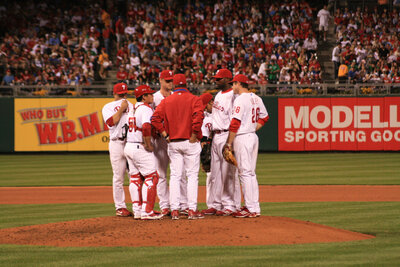