Eagles Flyers Phillies Sixers Union About Us Write For Us
Week 5 Preview: Union vs. New England Revolution
Welcome to Philly: Getting to know the Offensive 2021 Picks 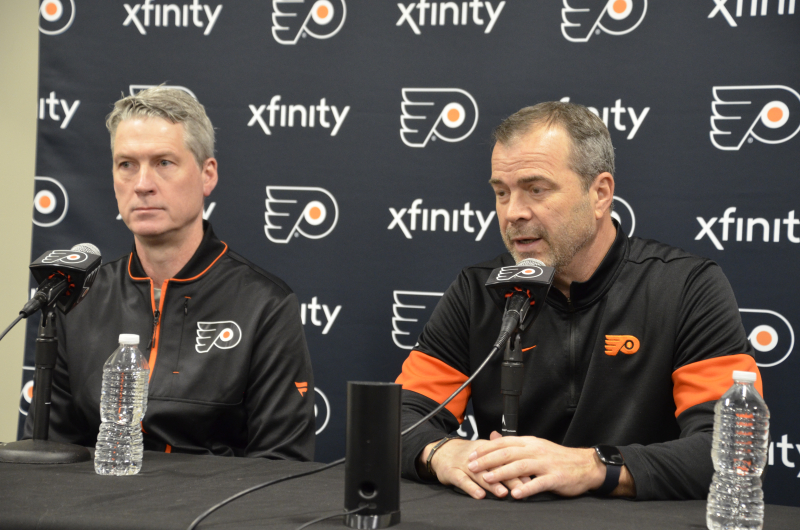 When it comes down to it, the Flyers struggles this season and the reason for their collapse and downfall can be contributed to a variety of factors. Some of those reasons do involve the crazy schedule and lack of practice time that NHL teams normally get.

But in this season, even team was dealt with the same situation. Every team had to play 56 games in a short amount of time. Every team dealt with limited practice time and more wear and tear. Multiple teams dealt with COVID situations or protocols limiting what they could do.

So as management – head coach Alain Vigneault and GM Chuck Fletcher and chairman Dave Scott – met the media on Tuesday, those excuses were just that. The trio rested on that for most of their comments, sounding more optimistic in hopes of a normal season than the work that may need to be done to a roster filled with holes.

“After starting the season where we got of results-wise to a good start, mainly due and a lot due to we had some real solid goaltending. Our team started to play better. Our goaltending slipped a little bit,” Vigneault said. “COVID hit us and after COVID, all we basically did was play games and not practice. I think this group because we’ve got veteran players, just a small group of players in that middle age frame of 27-28 and a lot of younger players. Those younger players when the game slips a little bit were not quite executing the way we need to have success.

“You have to practice and we didn’t have any practice time. I’m not saying that’s the reason. A lot of things happened, but I’m going to need some time to reflect on it. But I do think that played a part in our game slipping and our season going the way it did.”

“To be honest with you, I’m happy we have this experienced coaching staff,” Fletcher said. “AV, [Michel] Therrien, Mike Yeo and Ian Laperriere, they’ve seen a lot of different scenarios during their time in the league. I’m fully confident that they’ll have the best approach on how to bring these players back. Some of it has to fall on the players. It’s up to the players to be prepared to come into camp next year.

“As AV alluded to, a couple of those kids that did go back to Canada, I remember speaking to them in October and November, they were having a hard time getting ice time. They were having a hard time, gyms were shut down. Some of them had some adjustments to make and were having a tough time doing the training they normally do. Our expectation is that they will be able to find a better path to train this offseason. Certainly there’s some personal responsibility for every one of us in terms of how we perform and how we do our job. Having a veteran coaching staff gives me comfort that we’re going to find the right solutions to get these players back to where we need to get them to.”

That not only sounded like a lot of excuses for why things went wrong, but potentially blind faith that the team can just magically turn things around with a “normal” season. It’s obvious that things are not normal right now. There are still limitations in a number of areas that can affect training and ice time. As much as it is up to the players to train as properly as they can and make sure they are ready at the start of the season, the coaches need to make adjustments.

Vigneault took responsibility for team preparation, noting that slow starts hurt the Flyers throughout the season, but also noted that adversity can make a team better. Both Fletcher and Vigneault expressed confidence in Carter Hart returning to form, and Vigneault used the adversity on Hart from this season as motivation for overcoming his own.

“There’s no doubt that it’s very hard to take. I feel like I’ve let people down,” Vigneault said. “I’m going to regroup, analyze and come back better next year. It didn’t go the way we anticipated. It’s adversity. If adversity can help Carter Hart become better, adversity can help Alain Vigneault get better. Adversity can help the Flyers get better. Maybe the Flyers have been through a lot of that in the last little while, but it’s our job, Chuck and I, to get these players to play up to their full potential. That’s what we’re going to do starting next year.”

Most of the players echoed the same struggles with getting the training in the offseason that they needed or the challenges that came with preparing for the season. That said, they seemed to be more in tune with the reality of the situation. They understood that they need to change their habits. They understood that changes could be coming as a result of this season.

Some of the telling quotes came from players that have received the most attention, whether for their role or their situation. Claude Giroux spoke to being “pissed off at the position we’re in right now.” Nolan Patrick called this “the most important offseason of my life.” Carter Hart vowed to use the adversity from this season and come back ready for next year and that he was “looking forward to a clean slate.”

Finally, there was chairman Dave Scott, who first noted that the alignment from ownership to management is as good as it’s been to him in the last eight years. That message seemed to be off-base though, as just months earlier, Fletcher noted that the team “didn’t have the right mix” but seemed to be more prepared for more of the same roster to return again next season.

Scott also delivered his opening statement, again stating his confidence in Fletcher and Vigneault and saying the Flyers were “in a good place,” then stuck around for just five questions and about five minutes. It left more confusion and didn’t really answer the many questions surrounding this team.

Perhaps that’s for the best though. The words and excuses are tired at this point. It’s time to take action. In a critical offseason, those actions will speak the loudest, because it’s pretty obvious that everyone within the organization should be on full alert and will be on the hot seat if things don’t turn around next season.

Complete bull crap by ownership and management. When that is the type of response we get after the most dreadful season I have experienced as a 45+yr fan of the Flyers, why should anyone be surprised by the lack of courage and will to want to be the better team on the ice shown by the players? This is embarrassing for an organization that oozed the need to win when Mr.Snider ran the show. Shame on Scott, Fletcher and Vigneault.

I'm NOT a Flyers fan and I still feel bad for the team. Sometimes the players really are at fault, but this seems to be more a case of bad management and coaching. If you have management making poor decisions that undermine the strength of the team, a coach that selectively calls players out for underperforming, no apparent understanding of underlying causation or strategy for improvement, and vague platitudes in place of accountability, it's a recipe for disaster. The players are disheartened and fearful, and clearly receiving little practical guidance. They're not lazy, they don't want to be losing, and there's plenty of talent, but at the very least there are a lot of holes that need shoring up. It's time for someone to start steering this floundering ship and getting it back on course. Otherwise, next season will look just as dismal, if not worse, than the travesty that was 2020-21.

This is embarrassing for an organization that oozed the need to win when Mr.Snider ran the show.