While the Philadelphia Phillies faithful believe a full season represents normality, an underlying element will determine the divisional victor more than they expect. Like 2020, 2021 is already a unique campaign with its own complexion --unlike average annual differences. It stands alone!

Expectation-wise, baseball men were at a loss to completely plan for ‘21 because they’ve never had a 60-game schedule preceding a full 162. For, however, the strike-abbreviated seasons of 1994 and 1995, 113 contests were the lowest mark. So, the doubling or tripling of injuries doesn’t have a precedent as a guide.

“Write your injuries in dust, your benefits in marble.” - Benjamin Franklin

A normal year has injuries based on being hit by a pitch, crashing into a wall, collisions, and sprains due to forcing one’s body to make a catch or avoid a tag. In ‘20, missing a month was the equivalent of half a campaign. And misfortune affected the Phillies bullpen with no David Robertson and Seranthony Dominguez.

Currently, the pandemic has changed the last two offseasons because some players returning to an adjusted winter routine probably didn’t compensate to avoid overdoing their workload. And the result could be an unprecedented number of injuries.

* Estimate of expected days on the IL (injured list).

Unfortunately, major league supporters are unhappy with their club and feel there’s no excuse for losing. For years, though, players have stated their organization's line regardless of their top stars missing the season. But fans have taken it to mean their team should win even if eight relievers went down.

Following all MLB transactions, I’ve noticed a dramatic increase of injuries: double or triple the norm. However, many have made this observation, and no one can explain it. They can only guess like me.

In the tables, the important stars are at the top of each franchise’s list. Plus 2021’s baseball is 74 days old, so a player missing 37 days has been on the IL for half of it. Basically, these numbers are only the days on the IL and projected time on it going forward.

The expected 1-8 lineup hasn’t played for 125 days plus seven more ahead. Unfortunately, this led to a void in center field: the then eight hole in the order. Translation: If you need production from the eight hole to win, what does it say about the other seven regulars?

The rotation has been healthy, and the recent off days allowed manager Joe Girardi to use Aaron Nola, Zach Eflin and Zack Wheeler against the Atlanta Braves. Moreover, the skipper had claimed he gave Eflin additional rest without anyone questioning the three starters for those three matchups.

Both setup men have had IL stints totaling 43 days, and this has cost the Fightins some triumphs because Sam Coonrod and Connor Brogdon are a fifty-fifty gamble in the last three frames. Yes, they have three saves total, but they haven’t even earned seventh inning roles yet.

In a 9-5 defeat to Atlanta on June 8, Archie Bradley, the right-handed setup man, would have worked the eighth with one more outing under his belt. Instead, he pitched the sixth, but Brogdon and Coonrod blew a one-run lead: a loss due to Bradley’s correct usage after reactivation.

Even though he gets the call during high-leverage situations, Hector Neris is the go-to goat in the pen and always disappoints the locals when he doesn’t succeed. In fact, that’s when the faithful judge him and might prefer the Braves and/or New York Mets closers. Greener pastures?

A full 162 is the most accurate view because a virus-disrupted summer with cardboard fans and canned crowd noise was an aberration for many hurlers.

Rule of thumb for Phillies fans:

In New York, Edwin Diaz disappointed the 2019 Mets supporters: He had only pitched for low-pressure saves on the Seattle Mariners. Presently, he’s handling the Big Apple, but he’s never been in a pennant race:  Can he shine under the harsh criticism for any misstep?

According to Braves fans after blowing a save to the Phillies, they want Will Smith replaced and the manager fired. Basically, Smith had worked only one solid campaign closing after a setup role, and Atlanta gave him a three-year deal. But 2019’s San Francisco Giants won 77 contests and were 29 games out: no stretch-drive pressure.

In fact, one Braves supporter said it best regarding fans’ expectations. He stated they are unhappy unless a player produces at the height of a hot streak during his prime. Unfortunately, no star will ever live up to this impossibility, but their favorites are --no doubt-- exempt from this scrutiny.

Stop and think where you’re getting your information. Is it a writer who completely agrees with you? Translation: Most locals don’t do any research, and memory isn't a dependable method.

I listen to players for on-field information because they know the game they’ve mastered to reach and remain in the Show. Meanwhile, the higher-ups know how to make personnel decisions and the rules governing them. But there’s no substitute for good health to handle the stretch drive to October.

A month ago, the Phillies faithful demanded immediate action to acquire a center fielder and a four-slot starter. But Odubel Herrera and Vince Velasquez claimed those spots. And while injuries, the standings and available talent are factors on July 1, what else are they? The reason execs wait! 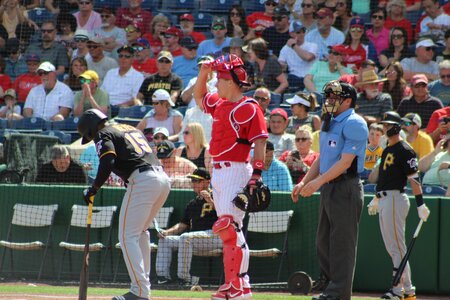