Eagles Flyers Phillies Sixers About Us Write For Us
Ben Simmons Must Go
Week 10 Preview: Union vs. Columbus Crew

Playing .600 ball is the formula the Philadelphia Phillies execs would prefer to exceed the CBT (competitive-balance threshold) by up to $20 million and/or plug their glaring holes by late July. But the players can handle their postseason aspirations with their bats and gloves. Three weeks down, six to go!

While the Phillies faithful annually want to go for even long shots, no organization has infinite resources or desires wasteful spending, as New York Yankees supporters are finding out in ‘21. However, health and changed rules midstream will be X factors along with pressure on the stars as the trading deadline approaches.

“The ultimate inspiration is the deadline.” - Nolan Bushnell

Barring long-term injuries, the Fightins’ offense depends on the regulars producing up to their track record. Granted, Alec Bohm is probably not a .338 hitter in 2021, but he’s also not a .233 bat either. Plus Odubel Herrera is a .280 hitter who can flip-flop in the lineup with Andrew McCutchen, when the need arises.

In the playoffs, clubs only require four hurlers, and Vince Velasquez would match up against other four-slot arms. But Velasquez is neither the developing pitcher from recent seasons nor the one during a May streak. No, hitters now expect other offerings besides his fastball in crucial spots, but his results will be acceptable.

If you judge by frames pitched and/or the box score, you could conclude three of the righty’s last four starts were bad. But he had a four-inning affair with a run scoring on JT Realmuto’s throwing error, and Joe Girardi pinch-hit for Velasquez, who would have continued: acceptable. Result: The red pinstripes had a seven-run frame.

Most contending organizations have three strong hurlers with a weaker fourth slot, and Velasquez would match up against other number fours. Basically, the good guys wouldn’t be at a disadvantage, and the right-hander could even be a shade better even if Girardi opts for a big inning.

While the Phils’ pen including Hector Neris can be shaky at times, they can mostly be a solid unit. However, more difficult opponents will be problematic during the stretch drive and in the postseason if they qualify for a berth. But some young relievers could still develop with two more months under their belts.

With injuries continuing to pile up, the franchise with healthy players --especially their rotation-- has the best shot to capture the NL East flag. Beginning yesterday (June 21), substance-abuse checking could lead to hurlers squeezing the bejesus out of the ball and could produce arm injuries and hit batters.

Even though substances allow pitchers to grip the ball, new products increase the spin rate and movement on the ball. Therefore, moundsmen have a distinct advantage they didn’t have with their own concoctions. But umpire’s in-game differentiations regarding acceptable substances would be problematic.

Suspensions: 10 days are for the pitcher and any player doctoring the ball for him. And there won’t be a replacement for a penalized hurler and/or the likely regular assisting him. Yes, a universal substance would solve this problem, but major league baseball hasn’t mentioned that possibility.

Note: My comparisons of the 2001 squad to the 2021 Giants are of two teams unexpectedly overperforming, but San Francisco veterans could be all-in for a last hurrah. Also, Jacob deGrom and Sandy Koufax at similar ages are dominant, plus their max efforts may not be the reason for unrelated ailments.

In the is-it-just-me category, the Giants (barring ultimate analytical success) remind me of the 2001 Phillies. Remember, they were in first place at June’s end and had an eight-game lead over Atlanta around that time. Cinderella-wise, then manager Larry Bowa reminded his squad it was July.

Another difference-making variable is the comparison of deGrom, 32, to Koufax, then 31, who had arthritis in his arm after his lengthy domination. Yes, Koufax had a five-year run ended, and deGrom’s 194 starts equal six campaigns. But deGrom believes batting is causing his problems. Question mark!

If the Giants come back to Earth, the Fightins wild-card opportunity improves, and this possibility is real because no one expected San Francisco’s success in the first half. Otherwise, winning the division would be the only road to the playoffs.

In New York, Mets supporters are under the impression they have an embarrassment of riches with the replacements’ production. However, those players can give a max effort leading to a gig elsewhere, and they see mostly fastballs due to lack of exposure. In meetings, the opposition covers the regulars, not the fill-ins.

To illustrate, Ruben Amaro Jr. had two weeks of consistent playing time due to an injury, and he capitalized on the opportunity. Like rookies, though, these replacements have declining production when the league finds their holes with off-speed stuff, and they hope for a bench role.

Carlos Carrasco and Noah Synderrgard have had setbacks in their recoveries, and the Metropolitans’ next 10 contests are against divisional rivals, including four with a Friday doubleheader versus the Phils. Translation: They may only play .500 ball with two quality starters and deGrom’s early exits recently.

Like most MLB fans, their locals expect the Mets to just cruise into October, but they are in for a rude awakening because it doesn’t work that way. Peaks and valleys affect most contending teams except rarities like the 2011 Phillies with four aces. Moreover, the variables could change any club’s summer in one game.

The preferred financial strategy is to exceed the $210 million CBT by up to $20 million AAV (average annual value) and absorb a 20 percent penalty for one year --and 30 percent for a second-- before sliding under a new CBT. But if a difference-maker will give them a golden opportunity, they will perhaps take two shots.

For the red pinstripes, they may not have the pieces to acquire an elite closer, and Aroldis Chapman, Josh Hader and Liam Hendriks probably won’t be available anyway.  However, Brad Hand could be of interest if the Nationals remain under .500, but the Toronto Blue Jays may also pursue him.

While the execs will likely pick up a right-handed bench bat even if the Figthins have any shot, the in-house closer options are probably under consideration now. Translation: If a 100-mph flamethrower drops to 98 mph, he increases his control of certain pitches, and the walks, passed balls and/or wild pitches are manageable.

In his last two performances, Jose Alvarado has fired 24 strikes out of 32 pitches (10.7 per inning), no walks, and acceptable contact during three complete frames with five punch outs. Basically, management believes they may have a lights-out closer, so where is the pitching coach? In his ear! 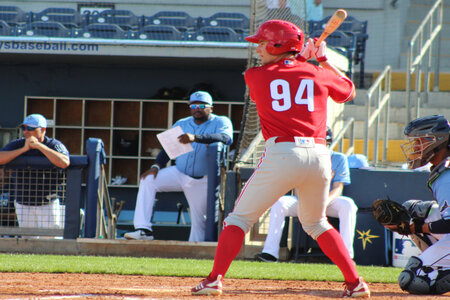