Eagles Flyers Phillies Sixers About Us Write For Us
Week 11 Recap: Who Are You, and What Have You Done With the Union?
Phillies Starting Eight are in the Lineup for the First Time Since Mother's Day

While the Philadelphia Phillies execs quietly resolve on-field shortcomings, their fans panic at problems, real and perceived; but ineffectiveness due to streaks, injuries, and growing pains affect the numbers. Temporarily! So, a hot April hitter can cool off in May, and a dominate starter can hit a rough patch.

May, June and July:

Some Phillies faithful expect the club to fail due to weaknesses, but all franchises have warts. Moreover, an injury-plagued season after an abbreviated campaign means at least 20 organizations have a decent playoff shot, and the Fightins are in that group, doubting Thomases.

“It is better to believe than to disbelieve; in doing you bring everything to the realm of possibility.” - Albert Einstein

At April’s end, center field and the eight hole were causing some locals and media types to panic. It was as if the Phils had to acquire a high-caliber glove, arm and bat to save the 162. No, it wasn’t the only issue; it was the highest nail to hammer.

In the end, Odubel Herrera received the call-up on April 26 even though he hadn't faced major league pitching for two years due to a suspension and the pandemic. Beginning on May 5, though, he hit .314 to month’s end after only 24 at-bats. Overall, he’s dropped from .264 to .247 because he’s streaky: no surprise there.

Against southpaws, he’s hitting .280 with a .341 OBP, so he can be an endgame thorn for the opposing skipper with the three-batter rule. Basically, he’s earning his playing time, and he’s not blocking any youngsters who are off to a good start. But rookies and bench fill-ins won’t get fastballs if they can hit them.

Rules with Rookies and Fill-ins for Phillies Fans:

Phillies Rookies and Fill-ins in this category:

To approximate a starter’s rank, his first 4-5 outings in April are a baseline, and his statistics will improve or decline from one appearance to the next. Unfortunately, many fans take a dim view of some moundsmen after a clunker. And some only repeat what they heard on a studio broadcast.

To illustrate, Vince Velasquez’s last performance came up short in the fifth inning. After two walks and an RBI double, a botched pop-up led to a second run, but the righty struck out the pinch hitter to end his day. Then, potential closer Archie Bradley --also a right-hander-- hung a curveball (second pitch) for a three-run bomb.

After watching each Velasquez pitch, I heard the postgame host sounding like an Internet commenter, but the former player immediately and surprisingly blamed Velasquez: a knee-jerk reaction? Fortunately, John Kruk saw a hurler pitching his way out of trouble and a manager with a quick hook: my take also.

Girardi has relieved Aaron Nola, Zack Wheeler and Zach Eflin early in contests as well, but homer-happy Kyle Schwarber was up after two swinging punch outs against Velasquez. Next time, former catcher Girardi might give Velasquez a little more leeway, if he believes Velasquez can give him another acceptable frame.

Despite many judging Velasquez’s summer by his last bad outing, real or perceived, he’s the four-slot arm because he had only ended May and began June with poor performances. Moreover, he’s had four appearances of working in or finishing the sixth inning plus three other possibilities including two with fielding lapses.

While Velasquez has a tenuous hold on the four spot, Matt Moore will get a second chance for the bottom rung after tossing five scoreless frames in a doubleheader’s second half. Currently, Spencer Howard could also make other starts or be a reliever like Ranger Suarez, another candidate for the five-man staff.

When a hurler relies on only two pitches but control of only one, his effectiveness is minimal.  For now, Hector Neris is suffering this fate, and he must again earn Girardi’s trust going forward. Realistically, he’s dropped to the third option for any critical outs.

An error prevented Jose Alvarado from picking up his first save as the new closer, but he needed five outs, not four. As a result, he had fired 31 bullets in a high-stress appearance and wasn’t available on Saturday. But after he had recorded four solid outings in a row, his first as-closer opportunity came sooner than expected.

With high-leverage outings, four-or-five outs to save an important game may be problematic if the fireman isn’t available the next night. However, Suarez and perhaps Howard could provide more than three outs in the sixth-or-seventh innings if they aren’t in the rotation. Translation: wild cards!

After ‘21, Bradley and Neris will be free agents, but Alvarado and Seranthony Dominguez will be in the pens’ back end. Meanwhile, Howard and Suarez could be rotation-mates because Velasquez, Moore and Chase Anderson will also be on the market.

Since their return from San Francisco, the Phillies have suffered two losses to the hot Washington Nationals, who had won seven of their previous eight. And they ended up with one loss out of 11 contests before cooling off. Normally, hot teams are always going to be difficult to overcome.

Beginning their home series at 22-9, the New York Mets won two of the first three games: one-run affairs with two going into extra innings. Unfortunately, fielding and a change of closers led to both losses, but what was the takeaway from the pressure-cooker series? A 2-2 road mark! 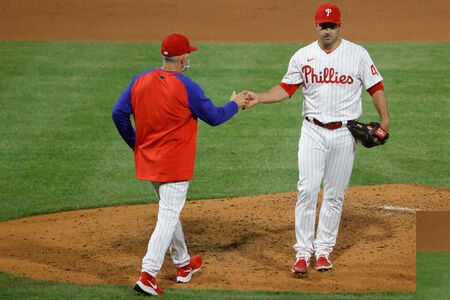 Herrera has returned to being a reliable player ( everyone has slumps, I know) and a few other bats need to warm up. A sudden rash of errors is puzzling. Some of this looks like my grandson's team. This Mets series highlighted the problem of good starters but no support. The one run games show the danger of relying on this group to hold a lead.
The bullpen alternates between being Cy Young and too young. Is there some hidden pocket of talent in A or double A or in the early development zone of high school kids in the Dominican Republic ?

In NYC, you could substitute the Phillies for Mets or Yankees and hear the same and/or similar complaints. In fact, one listener said he didn't know which team they were talking about. The Mets are 5-9 recently with 3 away games each in Atlanta and the Bronx. The Nats have to deal with the Rays, and the Phils get the Fish. So, the standings may look a bit different shortly.

Actually, the one-run games in Queens were a good sign of two fairly matched teams in talent and/or desire to win. And Alvarado's closing will plug that hole when other situations stop cropping up like in the seventh and eighth innings. I expect Howard and Suarez to pick up some late-game action. So, the possibilities look good.