Eagles Flyers Phillies Sixers Union About Us Write For Us
Report: Phillies to Attend Cole Hamels Showcase
What Could Have Been - Reviewing Phillies Recent Moves 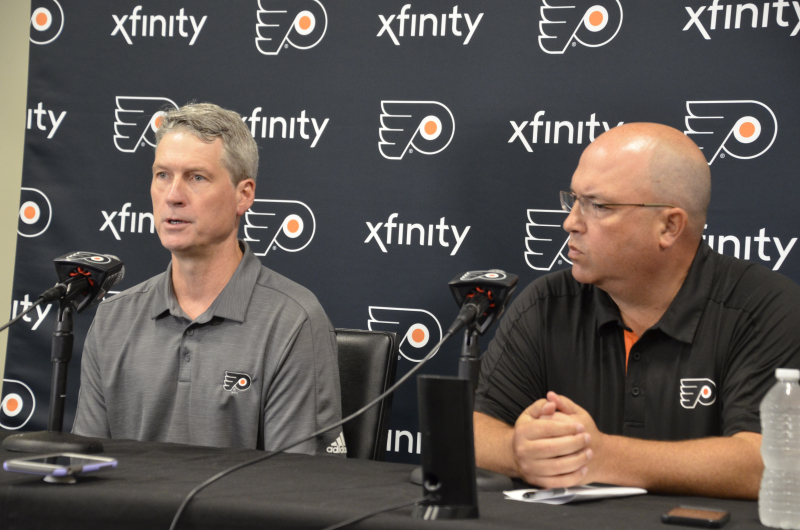 There is not much that we know about the Philadelphia Flyers and what their makeup will be come October and the start of a new season. Their offseason is already over two months old, following another season missing the playoffs, and as the Stanley Cup Playoffs took place and teams await the expansion draft for the Seattle Kraken, there is simply not much activity out there among teams.

That’s all about to change. Within the next three weeks, the Flyers and the other 29 teams – Vegas has exception status – will submit their protection lists for the expansion draft. At least one member of the Philadelphia Flyers will be bound for Seattle when the expansion draft takes place on July 21. Then the NHL Entry Draft follows in rapid succession on July 23 and 24. Free agency is also right around the corner, opening on July 28.

All of these dates are critical for the Flyers. As GM Chuck Fletcher and assistant GM Brent Flahr met with the media on Tuesday morning, it marked the beginning of what should be a busy few weeks for the team.

They need to get better. They know it. And they know time is of the essence.

“I think it's just the timing of everything. Between the Expansion Draft, the Entry Draft following that a few days later and then start a free agency, we have all the big events that may involve player movement really happening within literally a 10 or 12-day period,” Fletcher said. “Once you get past the first day of free agency, the amount of players that are available and the amount of cap space that's available probably be much more limited.

“I think there's pressure in the sense that if you have moves you want to make, this is when you got to try to make them. Having said all that, this type of environment where there's not a lot of liquidity in the system, it's a flat cap system, moves are a little trickier, in part because the Expansion Draft. There's not a lot of teams that are just able to take on a lot of money. There's a lot more communication about dollar for dollar type of moves, or can you take some money back or can you do this. It makes it a little bit more complicated. In saying that, over the next two weeks, my guess is the majority of player movement that happens this summer will take place.”

There were also plenty of mentions of the flat-cap and the impact it has on several teams. For now, it seems like teams are all waiting to see how Seattle approaches expansion and where they sit when the dust settles.

In the meantime, the Flyers have been busy behind the scenes. Fletcher hinted at personnel changes internally in the front office as well at with Lehigh Valley that should be announced in the coming weeks.

“We've worked hard as an organization for the last seven, eight years to patiently add and draft and develop a lot of young players. It's kind of been the focus of the franchise, going back to 2014 probably. You’ve got to be a little bit careful that you don't change course and start moving by good young players that maybe struggled for a little bit last year,” Fletcher said. “We have to find a way to make them better. We have to get better and we'll work very hard at that.

“We’ve spent an awful lot of time this summer looking at our staff, our structure. I think we've made some really meaningful changes and improvements to how we do things, not just from a coaching standpoint, but from a development standpoint, a scouting standpoint, and a data standpoint. We put a lot of time and effort this summer and fixing some things off the ice that we think will lead to better on ice results. We've looked at everything. Last year was unacceptable. It's been a busy offseason behind the scenes and I'm really happy with some of the moves we made. Now we have to find a way to get better on the ice and that'll be the focus from here on out.”

One area the Flyers are clearly going to look to address is defense. They never properly filled the void of Matt Niskanen’s retirement after the previous season. And while one player doesn’t make for significant change, as Fletcher noted, it is clear the area that once again stands out as the most critical for improvement: defensive play and goals against.

“To me, the number one priority is our goals-against. It was just ridiculous how many goals we gave up last year,” Fletcher said. “That goes back to everything. It goes back to the coaches having a great training camp and using the practice time early in the season to reinforce our systems and our structure. It's our goaltenders playing better. It's our defenseman playing better. It's our forwards managing the puck better.

“We're going to need to look at upgrades to our roster. There's no question. We're also going to need the players that are returning to play better, in particular, without the puck and structurally. We’re going to need our coaches to get our players back in that structure and reinforce the system. It's not just one thing that led us to fall from seventh in the league defensively to the bottom of the pile. You have no chance, no chance to win in this league unless you're at least in the top half of the league defensively. We have a lot of work to do. Again, we have holes we need to fill and we have players that are currently on our roster that need to play much better. It's got to be a holistic approach. It's not just one player that's going to turn it around. It's everybody, starting with me that has to be much better this year and that has been conveyed to everybody in the organization.”

Over the next few days, the Flyers will make some news with their expansion list, which Fletcher said is pretty much already determined barring last-minute changes. There are restricted free agents that Fletcher said will be tendered qualifying offers – notably Carter Hart, Travis Sanheim, and Nolan Patrick.

But it will be the events in between. It will be what happens at the NHL Draft and if any significant move is made via trade then. It will be free agency and the early days of it when most players find a new home that will determine if this team improves on paper.

Perhaps the biggest indication that the direction shifts for the Flyers will come when the games begin, when it is on full display if the approach has changed, if the play is legitimately better, and if there aren’t bigger changes to come as a result of its success or lack thereof.