Fletcher: ‘I Expect to Have a Better Team By End of Next Wednesday’ 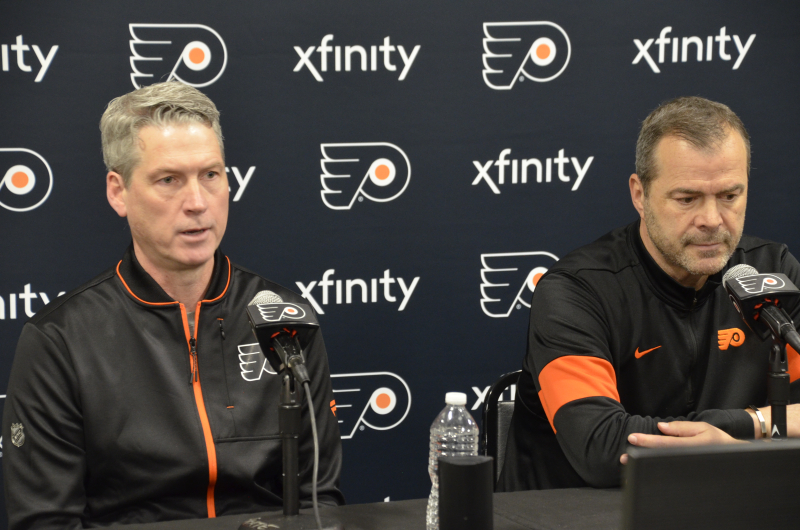 It took all of 30 minutes following the end of the roster freeze for the other 31 teams in the NHL for Chuck Fletcher to make another trade. This one served a key purpose for the Flyers, because without it, not only were they limited in what they could continue to do with the roster ahead of the coming season, but they also wouldn’t even be able to fill all of the roster spots necessary.

Fletcher made his second trade this offseason, sending defenseman Shayne Gostisbehere to the Arizona Coyotes along with a 2022 second-round pick and a 2022 seventh-round pick. The Flyers received “future considerations,” which ultimately translates to Gostisbehere’s $4.5 million in cap space. No salary was retained in the deal.

On the surface, it may seem like the Flyers traded Gostisbehere for nothing in return. Including two picks to move a defenseman, all for cap space? In reality, Fletcher had to be selective in his decision to make the deal. He declined two other offers trying to move Gostisbehere and his cap hit. One team asked for prospect Cam York to be included in the deal. Another team asked for the Flyers first-round draft pick at 13th overall on Friday night.

“It's a tough environment out there right now,” Fletcher said. “It's tough to move money. I think everybody saw that last night with the Seattle Expansion Draft. I had many, many, many conversations with Ron Francis before. I spoke to him last night and again today. He made clear they wanted to keep their powder dry. Cap space is so important and teams are going to be in trouble, if not now then later on this summer or next year. Just having multiple opportunities to, quote unquote, help other teams. The environment’s tough.”

With that in mind, the Flyers did get some relief from moving Gostisbehere. The additional $4.5 million in cap space gives them approximately $13.8 million available right now. Fletcher is preparing to continue looking for additional help to plug multiple holes on the team’s roster.

“Better, obviously better. I think we have the ability to fill all our holes and maybe focus in on one or two of them,” Fletcher said. “Ideally, if you can make a hockey trade where you're moving dollars and taking dollars on and that can maximize your cap space. We'll just look and see where. I would say we're involved in a lot of conversations right now as you tend to be this time of the year. Free agency is less than a week away. Free agency can be good and bad, certainly have an opportunity maybe to fill some holes. I don't know that we're in a position to be chasing players and outbidding teams. We'll see what we can do here in advance of free agency. We're certainly in a better position, not just for this year, but also for 22-23 with this move today. Yet we recognize we have a few holes to fill.”

As the NHL Draft arrives on Friday and the offseason’s busiest period begins, Fletcher is making sure the Flyers do everything they can to get better. And he seems to anticipate that it will be a better roster in the next week.

“Certainly, we're going to look at other options. We need to make a decision about the number two goalie clearly. We need to look at one or two other opportunities on defense. We have some guys internally that can push, but we certainly are still looking at the outside. We have some other holes out front,” Fletcher said. “What we can get at what price will be a determining factor in which way we go or cap space will be a determining factor. Trying to make judgments on which young players we think are closest to making it will also be a factor.

“It's been busy. That's exactly what we're going to try to determine here over the next week and see if we can add another piece or two. You never know. I believe we can, but we'll see. I do expect to have a better team by the end of next Wednesday and that's exciting. We have a lot of work to do.”

Just about a week remains in Fletcher’s initial timeline of the offseason’s critical stages. When free agency opens in a week and teams put the finishing touches on the roster, it will become time to judge how the Flyers GM fared.

So far, it appears to be progress. It feels like an incomplete offseason with time still remain to make that final push to fill in holes. With this most recent move with Gostisbehere, it sure seems like Fletcher continues to have something in mind with how he can improve the Flyers with such little room to maneuver. He’s been creative to this point, and now it’s time to see what he has up his sleeve next.