Eagles Flyers Phillies Sixers About Us Write For Us
Previous month:
June 2021
Next month:
August 2021 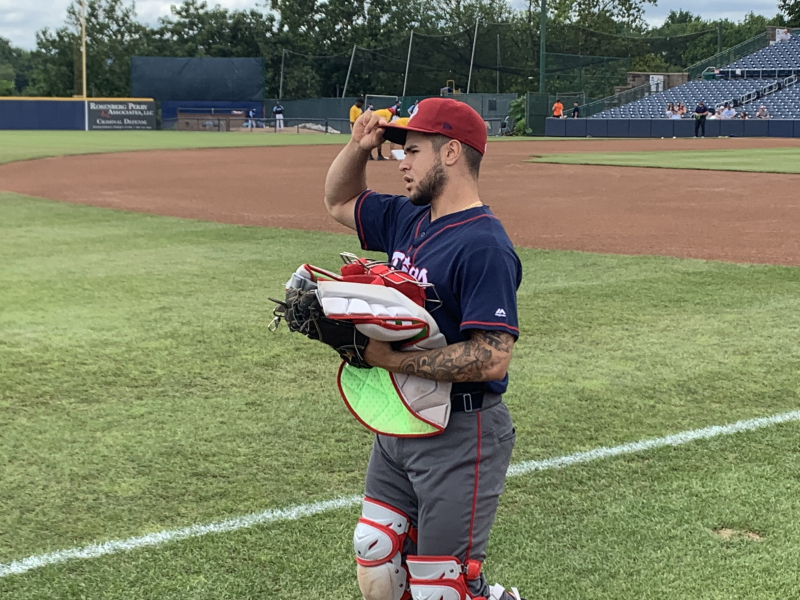 The MLB Trade Deadline is set for Friday at 4:00 p.m. Eastern.  The Phillies, who failed to connect with the Pittsburgh Pirates on a trade for a starting pitcher, will presumably keep trying.  One Phillies prospect is one who could be on the move.

Phillies catching prospect Rafael Marchan was set to be in Double-A Reading's lineup on Wednesday evening.  However, he was pulled from the lineup not long before first pitch, as Jim Salisbury of NBC Sports Philadelphia notes.  Could Marchan be on the move?

The fact that Marchan was in Reading might have to do with a potential trade.  The Phillies demoted Marchan from Triple-A Lehigh Valley to Double-A Reading on Tuesday.  That kept Marchan more accessible to Philadelphia than had he remained with Lehigh Valley, who are currently in Rochester to play the Red Wings.

Phillies Reportedly Are a Potential Suitor for Rockies Starter Gray

The Phillies missed out on starter Tyler Anderson, who reportedly would have been on his way to Philadelphia had a medical report not canceled a trade between the Phillies and Pittsburgh Pirates.  So, the Phillies returned to the drawing board in their quest to add starting pitching.   One notable name has been linked to the Phillies.

Jon Morosi of MLB Network reports that the Phillies might be one of the potential suitors for Colorado Rockies starter Jon Gray:

Sources: #Rockies listening to teams on Jon Gray, with suitors including the Giants, Padres, and Phillies. No trade is close, and there’s not likely to be clarity with Gray’s market until after Max Scherzer is dealt. @MLBNetwork @MLB

The Nationals are expected to trade Max Scherzer this week.  Morosi previously reported a deal could come together tonight.

Gray has spent his whole career with the Rockies, and has been generally a reliable starter.  Though he had tough seasons in 2020 and 2018, he has mostly been an above-average starting pitcher.  Lifetime, Gray is 51-43 with a 4.47 earned run average.

Two seasons ago, at the trade deadline, Chuck Fletcher looked to add some veteran depth to the lineup. One of those acquisitions came from the Montreal Canadiens, as Nate Thompson joined the fold.

Thompson returns to the Flyers as another free agent acquisition, signing a one-year, $800,000 deal.

When the free agent market opened at noon on Wednesday, the Flyers wasted no time adding one of the remaining pieces left. They needed to get a playing partner for Carter Hart.

The Flyers have signed goalie Martin Jones to a one-year, $2 million deal.

The Eagles reported to training camp on Thursday morning, which means that the team had to make some official roster moves.

Among the moves, were the placement of three players on the Reserve/COVID list.

The free agent market officially opens at noon on Wednesday. For Chuck Fletcher and the Flyers, though, a large chunk of the offseason work has already taken place.

Fletcher admitted at his press conference on Saturday following the NHL Draft that his goal was to get ahead of free agency and the crazy bidding period that would likely follow. Instead of waiting for this time to arrive, Fletcher got creative and made four trades in the span of eight days, acquiring defensemen Ryan Ellis and Rasmus Ristolainen as well as forward Cam Atkinson, while sending defensemen Phil Myers, Shayne Gostisbehere and Robert Hagg plus forwards Jake Voracek and Nolan Patrick, as well as four draft picks, out in various deals.

The Flyers free agent work has already begun. Fletcher expressed interest in adding low-end deals at forward and defense in addition to the need to find a goaltending partner for Carter Hart. The defenseman appears to have arrived in reports of the signing of Keith Yandle on Tuesday.

As the market opens, the Flyers are still not finished yet. They will definitely be signing a goalie, likely on the opening day of free agency on Wednesday. Don’t rule out the addition of another forward as well to provide some added depth in that department.

With those things in mind, here are a few candidates at each position that the Flyers could target in free agency.

Phillies Lose Out on Starter Anderson to Mariners After Medical Snag

When a trusted baseball reporters such as Jon Heyman calls a deal "close", it usually means one thing: the deal is pending medical review.  The Phillies were reportedly close to a trade for Pittsburgh Pirates starter Tyler Anderson, as Heyman and MLB.com's Todd Zolecki and others reported.  But at the last minute, the trade hit a snag.  And now, Anderson is elsewhere.

ESPN's Jeff Passan was among those to report that after a medical issue, Anderson was close to being traded elsewhere:

The Seattle Mariners are finalizing a deal to acquire left-hander Tyler Anderson from the Pittsburgh Pirates, sources tell ESPN.

The Pirates thought they had a deal today for Anderson with Philadelphia, but it fell through on medical review. Seattle went and got him instead.

The trade has been finalized.

The Phillies, 6-4 losers to the Washington Nationals on Tuesday night, thought they had struck a deal with Pittsburgh for lefty Tyler Anderson earlier in the day, but the deal stalled when the Pirates didn’t like what they saw on the medical report of minor-league pitcher Cristian Hernandez, one of two players that the Phillies had agreed to part with.

The Pirates instead received two players from the Seattle Mariners instead.

So it appeared the Phillies had their first deal ahead of the July 30 trade deadline, but it's back to the drawing board for the Phillies.  After losing to the Washington Nationals on Tuesday night, the Phillies returned to the .500 mark.   The New York Mets lost to the Atlanta Braves 12-5, so the Phillies lost no ground.  They remain 3.5 games out of first place.

The Phillies may be close to making their first move ahead of Friday's 4:00 p.m. MLB Trade Deadline.  With the Phillies having needs at starting pitcher, relief pitcher, and center field, they will likely need to make multiple moves.  At least one move - starting pitcher - may be crossed off their list.

According to Jon Heyman of MLB Network, the Phillies are close to a deal with the Pittsburgh Pirates for left-handed starter Tyler Anderson:

Tyler Anderson close to being dealt to Phillies

Anderson has been scratched from his scheduled start tonight.

Anderson is 5-8 with a 4.35 earned run average for the Pirates in 2021.  That might not sound impressive.  However, one thing Anderson does is last deeper into games.   Anderson has not pitched fewer than five innings in any start in 2021.

Originally drafted by the Colorado Rockies, Anderson spent four seasons there before joining the San Francisco Giants in 2020.  He signed a one-year deal with the Pittsburgh Pirates prior to 2021.

UPDATE: The details of the trade appear to be set, reported by Pittsburgh's Jason Mackey, of the Pittsburgh Post-Gazette, 93.7 the Fan, and KDKA:

Hear Anderson to Phillies trade has hit a snag. Not sure the cause.

What in the world. So Tyler Anderson, wearing Pirates gear, is throwing in the bullpen.

UPDATE #3: Phillies Lose Out on Anderson

The deal fell apart.  Read the reason why here.

At his weekend press conference, Flyers GM Chuck Fletcher made it clear that the team put a lot of faith in younger players last season and that it contributed to the struggles. With that in mind, he made it a point to include the possibility of adding another veteran defenseman or forward in addition to a second goaltender needed on the roster.

On Tuesday, a veteran defenseman was indeed added. The Flyers have signed Keith Yandle to a one-year deal worth $900,000.

According to multiple sources, the Union are gearing up to add two new players to their current roster.

The players in question are Venezuelan midfielder Jesus Bueno, who currently plays for Deportivo Lara in the Venezuelan Primera Division, and Brazilian forward Matheus Davo, who plays for Corinthians in Brazil’s Serie A.

Bueno would be acquired on a permanent deal, while it’s looking like Davo would come to Philadelphia on a year-long loan, with the Union retaining a purchase option as part of the agreement.

Bueno is a 22-year-old midfielder, who is able to play as a No. 6 or No. 8. He has made 76 appearances for Deportivo Lara, and is currently the club’s captain. His versatility in the midfield will give Jim Curtin even more options for rotating his midfield diamond, experimenting with formations including Bueno, Alejandro Bedoya, Leon Flach, and Bueno’s fellow Venezuelan, Jose Martinez.

Davo is a 21-year-old forward who would add some much-needed depth to Curtin’s options up front. He would most likely be filling in as a second striker, partnering with the likes of Kacper Przybylko, Cory Burke, and Sergio Santos. Davo has played with Guarani FC in Brazil’s Serie B on loan, where he registered two goals and three assists in 1,000 minutes with the club.

MLS insider Tom Bogert broke the news that the Union are in a position to finalize these signings, while Marcelo Braga of Globo initially reported the Union’s interest in Davo, and Mario Sanchez of Mundo es un Balon first reported the club’s interest in Bueno.