For the Philadelphia Phillies, the winning key in the National League East is having their stars on the diamond considerably more than the IL (injured list). IL days, not months! Yes, avoiding the IL entirely isn’t realistic, but some recent seasons were excessive.

The Phillies faithful aren’t the ones risking serious injury crashing into a wall to rob an opponent of a home run, ripping their grass-stained uniform by sliding into home plate for a walk-off victory, or spending countless hours preparing or rehabbing. No, they’re the ones in some instances disappointed by lack of perfection.

“It is not the critic who counts. The credit belongs to the man who is actually in the arena.” - Theodore Roosevelt

Although the Fightins’ health hasn’t crippled them standings-wise, winnable games came up short due to missing pieces in the pen and the lineup. Only Sam Coonrod on July 24 will have recently missed a month. Basically, most players were healthy before the All-Star break.

The New York Mets will have JD Davis providing needed offensive punch in the second half, but his defensive shortcomings are the coin’s flip side. Rotation-wise, Carlos Carrasco will return sometime in August, and Noah Syndergaard will be available in September if he doesn’t have another setback.

With oblique issues, the Mets may get lefty David Peterson back in mid-August and Francisco Lindor in September. And while the bottom of the five-man staff is up in the air, Carrasco, 34, could be having age-related injuries and setbacks. Meanwhile, Jacob deGrom is now on the IL (forearm tightness).

For the Atlanta Braves, backstop Travis d’Arnaud will return in August, but their receiving is currently fluid. Moreover, their rotation will continue to use prospects as fifth starters until Huascar Ynoa’s return. And Joc Pederson acquired from the Chicago Cubs is replacing Ronald Acuna Jr.

Half a loaf, no? Rumorwise, Atlanta may pursue another outfielder to platoon with Pederson, but an in-house candidate might get a July look. That stated, the next 10-day period coincides with proving to management they are worth adding pieces for the divisional pennant other than backup catchers.

Despite another setback, Stephen Strasburg could return in August to boost the NL East chances of the Washington Nationals. But they finished the first half at 2-9 after losing Kyle Schwarber to a severe hamstring injury, and they now trail the Metropolitans by six games. In fact, their hot streak ended at two games over .500.

Because Starlin Castro is on administrative leave for a domestic-violence allegation, they now need a third sacker. And Yan Gomes has an oblique injury, so they are also signing backup receivers for a month or more with their Opening Day catching tandem on the IL.

Reportedly, the Phils have one of the easiest second-half schedules. They will play eight contests at home versus the Braves (four) and the Nats (four) after two away games against the New York Yankees. However, only the Bronx Bombers have a better record at 48-44.

Barring long-term injuries or a major losing streak before July’s end, Dave Dombrowski, president of baseball operations, will be a buyer. And if he wants a fourth starter instead of Vince Velasquez, he could slide Velasquez into the bottom rung. Remember, playoff teams only have a four-man staff.

Velasquez has pitched beyond five frames in six of his last 13 outings after two appearances to build arm strength. Moreover, he had four decent performances where rain or a pinch hitter ended his night, but his pitch count indicated another 1-2 innings remaining. And though the righty’s ERA has fluctuated, it’s 4.88 as a starter.

Blown saves can be holds blown as well: They aren’t always about the last 3-5 outs. In the first half, the Phillies had 22, but the Los Angeles Dodgers had 17 to 16 for the San Francisco Giants. Yes, they should be blown holds, but they’re not for reasons unquestioned.

While many believe the Fightins must have a closer, Ranger Suarez offers more than saves. Unlike most relievers, Suarez has a starter’s control and arsenal, plus he has been equally effective in any situation Joe Girardi has called for. Repertoire: He uses a 95-mph sinker, a four-seam fastball, a slider and a changeup.

Last-minute deals on July 30 (2021’s deadline) are the norm, not the exception: Front offices wait to pull the trigger on swaps until they have maximum info on their postseason chances. So, if you get nervous, you can only blame yourself because it’s their annual approach.

Organizations don’t want to move prospects if they have in-house solutions. Like center field in April, Odubel Herrera claimed the spot after a week of adjusting to major league pitching. Ergo, Dombrowski didn’t deal away any youngsters to plug that hole.

In May, the rotation had concerned many fans, but Velasquez has claimed the fourth spot, and Matt Moore has a 3.06 ERA since starting again. However, Spencer Howard could be a start or two away from replacing Moore if the southpaw has an unacceptable performance. Another possibility: A twin bill requires a fresh arm.

Injury or an unexpected quarantine situation could change the direction the Phillies pursue by July’s end. So, speculation on acquiring a four-slot hurler, Craig Kimbrel, and/or a veteran right-side bench piece may not be the biggest need on July 27.

Staying healthy is paramount to the red pinstripes’ playoff aspirations, and ‘21 so far is favoring the Philadelphia franchise. To paraphrase Rhys Hoskins, they know they must win --10-4 in July (.714)-- and force the execs to do something. Go all-in! 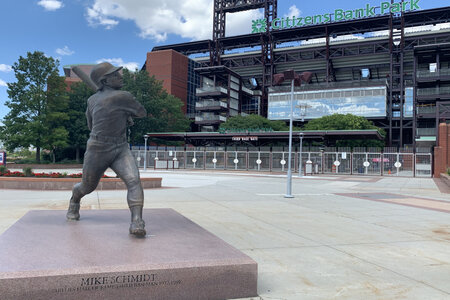