For some Philadelphia Phillies fans, it’s time to add another summer to the “non-playoff appearance” list. Granted, most haven’t mentioned those specific sentiments, but some have remarked even after reading the schedule of the Fightins and the Atlanta Braves through Sept. 5.

While the Phillies have their doubting Thomases, other major league organizations also have supporters recently giving up after devastating losses or bullpen disappointments. Yes, New York and Boston locals like Philadelphians express similar views.

“If the quickness of the mind and the fluency of the tongue are too punctilious and sharp, moderate them in your activity and rest.” - Xunzi

Prior to Opening Day, some fans believed the Phils would be a .500 team and finish in third place at best. Basically, they preferred the safe middle-of-the-road prediction. But when the Phillies are above .500 and in second place, they have many players and management to blame. Hello, is anybody home?

To illustrate, the season is over without Rhys Hoskins, but a .500 record with a third-place finish will also end on Oct. 3, no? For now, Joe Girardi’s strategy is to play JT Realmuto daily behind the plate or at first base depending on the opposing starter. Ergo, switch-hitter Rafael Marchan will mostly face right-handers.

Expect a matched-up batting order to get the most out of Andrew McCutchen, Didi Gregorius, Jean Segura, and the hot hand. Due to the schedule, though, it’s workable with the incentive of hitting one’s way into more playing time. And if Alec Bohm impresses at Triple-A, he could return in a part-time role and pinch-hit.

Many critics will point to acquiring Kris Bryant and the numbers he’s putting up for the San Francisco Giants. However, they’re managing his right-side tightness. But if it’s his oblique, an extended absence would cripple the Giants’ divisional chances with the Los Angeles Dodgers chasing them.

Like 2020, 2021 is not a normal campaign due to an extremely high injury count, and one reason is 60 contests followed by a full 162. Most, though, involve soft tissue due to disruptions of preparation and routine. So, tomorrow, any star or reserve could have a shortened ‘21 like Hoskins.

In fact, Zach Eflin is again on the IL (injured list) with a balky knee and probably won’t be back for his final six or seven appearances, plus the inoculated righty also tested positive for COVID-19. Yes, the coronavirus could strike and put any player on the COVID-19 IL, as Andrew Knapp, Luke Williams and Eflin found out.

Who replaces Eflin behind Zack Wheeler, Aaron Nola, Kyle Gibson and Ranger Suarez? Matt Moore. However, the minor league season began a month late and will end on Oct. 3 also. The best case scenario: Eflin could rehab and have a start or two in late September or have a postseason role if there are no setbacks: iffy!

In the playoffs, four-man rotations are the norm due to off days. And though the Fightins might have Eflin to cover three innings for a faltering hurler (quicker NLDS hooks), he wouldn’t have Suarez’s versatility. But Suarez could turn out to be the better starter of the two.

Basically, relievers have control problems and would be in the five-man staff except for this downside. And it’s easy to hang a secondary pitch and/or catch too much of the plate with a fastball: Boom! Translation: A souvenir for the paying customers requires only one mistake.

Realistically, a fastball down the middle might get past the batter, while a hanging breaking ball has a hit-me face. And commanding a heater might be easier for a closer instead of mixing in secondary pitches. But Ian Kennedy isn’t the only closer with the long-ball issue.

For instance, some Atlanta locals expect to lose two postseason ballgames because of a ninth-frame bomb off Will Smith, who has allowed three homers in his last five performances. In Gotham, Arodis Chapman recently needed a reliever to get the final out and has struggled in two of his last four outings.

While many MLB supporters believe Craig Kimbrel was the answer despite two poor summers for the Chicago Cubs, he was only willing to remain in Chicago. But the White Sox have received one save in two chances, and Kimbrel has given up four round-trippers with a 7.15 ERA over 11 ⅓ innings. A missed opportunity?

If the Braves, Yankees and Mets don’t have a lights-out closer, expecting an entire top-tier pen is wishful thinking. In fact, only the Yanks had a dominant bullpen for roughly three campaigns. So, setup men like Hector Neris, Jose Alvarado and Archie Bradley have flaws but aren’t utterly disappointing.

In September, the Fightins will be able to carry five more relievers with the above four: Connor Brogdon, Sam Coonrod, Seranthony Dominguez and Vince Velasquez. Plus if Elfin or Moore are the ninth, JD Hammer and Bailey Falter would be alternatives. However, clubs can only carry 14 arms even with rosters expanding to 28.

Phillies and Braves schedule from Aug. 30 through Sept. 5:

According to the upcoming two series, the Fightins will need to pick up two games by Sept. 5 to be 2.5 games out with 26 to play. No, the Braves don’t have to lose seven contests, and the Phillies don’t have to win six ballgames. It is, though, a difficult task nonetheless.

During an injury-plagued 162 with COVID-19’s uncertainty, a change can affect any team at any time in August through October. Plus Segura and Gregorius in on-field postgame interviews immediately expressed sentiments regarding their playoff hopes, and how can you tell it’s top of mind? Their first words! 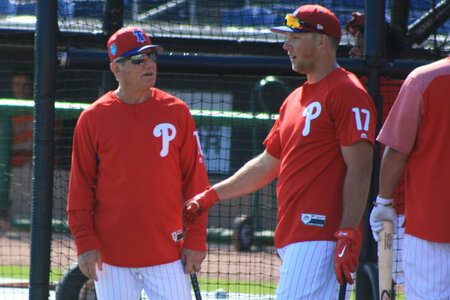 As long as McCutchen and Gregorius are the best the Phils have at their respective positions their not winning anything!

Forgetabouit, it’s over! Turn your attention to the Iggles, they may win six games this year.

I just said it isn't over, but these next two series are defining games. And they need to make up ground in them. Two games is preferred but at least one.

BTW, what month did you decide their fate from March through August or sooner?

Thanks, firstly, for reading.

I just said it isn't over, but these next two series are defining games. And they need to make up ground in them. Two games is preferred but at least one.

BTW, what month did you decide their fate from March through August or sooner?

Like every other year
It comes down to "IF"

Well, there are two types of maybes, and this year is a maybe yes.