Eagles Flyers Phillies Sixers About Us Write For Us
Previous month:
August 2021
Next month:
October 2021

If you looked at the lineups for both teams entering Thursday night's preseason game between the Flyers and Bruins, the result shouldn't come as a surprise. The Flyers dedicated their lineup to players who did not play on Tuesday, mostly AHL players, bottom-six candidates and prospects. The Bruins dressed a majority of the roster that will be on the ice later this month to start the season.

The Bruins came away with a 4-2 win over the Flyers in the second game of the preseason for the Orange and Black.

Week 26 Recap: One Point Is Better Than None

Although the Union would’ve been looking for all three points against who are arguably their biggest rivals, a point against the New York Red Bulls will be somewhat welcome in the Union’s playoff race.

Sergio Santos showed that hadn’t lost any of his energy and determination from last week’s game against Atlanta United when faced with the Red Bulls’ defense. Santos was able to steal the ball away from opposing defender Dru Yearwood, find striking partner Kacper Przybyłko inside a jam-packed 18-yard box, and while no goal came from the efforts, the message was clear: Santos was going to be causing problems for New York’s back line.

Not to worry, however, as Santos got his moment of glory shortly thereafter. A corner kick found its way into the six-yard box, where Santos was waiting amongst a sea of bodies. He stuck out his knee, able to knock the ball past the goalkeeper to put the Union in the lead.

After some back-and-forth play, the Red Bulls were able to start finding gaps in the Union’s defense as well. Patryk Klimala stayed on his ball and nearly saw his feverish run turn into a goal, while Yearwood forced Andre Blake to make a save around the half-hour mark.

The home team weren’t looking particularly threatening, but a long-range cross from Carlos Coronel found Omar Fernandez to put the Red Bulls on the board first.

The Union were dealt another blow when Jose Martinez was shown a yellow card following a tackle in the attacking third, meaning that he will not be available for selection against Columbus Crew on Sunday, Oct. 2.

The second half saw Daniel Gazdag and Paxten Aaronson enter the fray in a bid to generate more offense for the visitors. Aaronson nearly found another goal off a corner kick, after he managed to find his way near the back post, but was unable to convert.

In the 85th minute, the Union saw two more yellow cards—one for Kai Wagner for a questionably-angled tackle on Daniel Royer, and one for Blake after expressing some major frustration following a corner kick.

Aaronson once again found himself involved in a scoring opportunity, threading a ball through to Przybylko, but the Polish striker was unable to capitalize.

Man of the Match: Santos can receive the honor because he salvaged the only goal, and therefore a point, for the Union, but some serious recognition needs to be given to Aaronson for his immediate impact on the game when he entered. A plethora of chances were created because of his creativity and spatial awareness, and although a goal didn’t come to fruition, the offensive intensity didn’t waver thanks to Aaronson’s influence.

The Main Takeaway: It’s not the ideal result, but it’s one of those games where the result doesn’t necessarily reflect the performance. The offensive pressure was just what was needed to wear down the Red Bulls’ defense, and it’s exactly what’s needed in the last stretch of games in the regular season. It’s also nothing but positive to see the young players logging more minutes and being allowed to create more opportunities and control the game to a certain extent. 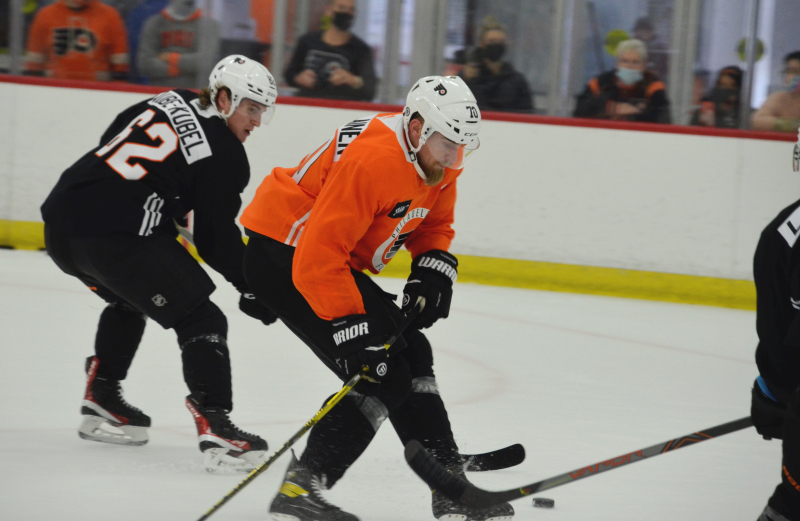 Following a 3-2 overtime loss to the New York Islanders to open the preseason on Tuesday, the Flyers hit the road for the first time this preseason. This will be a chance for a primarily different lineup to debut this preseason as the team looks to make the right decisions regarding the final roster and continue to make strides toward being ready for the start of the regular season.

The Flyers will face the Boston Bruins, playing in their third preseason game so far. They split the first two decisions, both on the road. Game time is 7:30 p.m. The lead group at Wednesday’s practice for the Flyers seemed to say a lot about where the team’s roster sits through the first game of the preseason. There is a clear cut group of leaders to make the final roster on Oct. 15 and a few interchangeable parts that could make up the final few spots.

There were a couple of small changes to that group at the last minute. Cam Atkinson did not practice, taking a maintenance day. Alain Vigneault said that Atkinson was not scheduled to play on Thursday anyway.

In fact, Thursday’s lineup in Boston for the Flyers second preseason game will feature a bunch of new players who did not suit up on Tuesday night. Only two players will return to the lineup: veteran defenseman Nick Seeler and prospect Tyson Foerster.

Foerster had a solid rookie camp and has turned heads so far, clearly drawing the eye of Vigneault to include him among the regulars.

Following a two-game winning streak, taking all six points from matches against Orlando City SC and Atlanta United, the Union have seen themselves make a huge jump into fourth place in the Eastern Conference. They’ll be travelling to northern New Jersey for the latest installment of their rivalry against the New York Red Bulls, who currently sit seven points out of playoff contention.

Two solid wins, along with Kacper Przybylko returning to offensive form with three goals across those two games, has provided plenty of momentum for Philadelphia going into this game. However, Jim Curtin pointed out that the Union need to always be looking ahead to the next game instead of relishing in their past two matches.

“That performance means nothing if we don’t follow up with another one against Red Bull,” Curtin said.

The Union have not lost to their northern rivals since September 2019, but by no means does that guarantee a cruising win in this upcoming game.

“These games are usually one play games,” Curtin said. “We bring out the best in each other. All games are important at this point and every point matters, but when it’s Red Bull, there’s a little something extra for both teams.

This match will be especially trying for the Union, seeing as they have a multitude of players out with injuries. Captain Alejandro Bedoya, who was absent from the Atlanta game due to a calf problem, will return, but Curtin will be looking to make the most out of the players that are available.

“As a coach, you have to look a couple days ahead and have a plan,” Curtin told media. “It’s not ideal, we’ll be missing about eight players in the most important games of the year.”

The biggest advantage in the Union’s recent performances has been the fact that they have been putting in solid team performances. Defense, midfield, and attack have all done their part to snag three points, and the cohesiveness between the players is their biggest strength right now. Against an admittedly weaker Red Bulls side, that could be the element that puts them all the way over the edge. The next step is to ramp up the goal count so they don’t skate by on one-goal leads anymore.

Score Prediction: The Union’s win streak coupled with the fact that they seem to have genuinely found their footing again after a stretch of games where they weren’t playing like themselves could lead to a convincing win. With the momentum picking up, this game could see more than just Przybylko or Santos on the scoresheet. More players (including defenders) are involving themselves in the attack, meaning that there could be a variety of goalscorers to give them a comfortable lead over the Red Bulls. A result of 3-1 shouldn't be a problem for the Union.

The Eagles have made the signing of Cameron Malveaux to the practice squad official.

In addition to that move, the team announced it was promoting Sua Opeta to the 53-man roster.

Opeta is in his third season with the Birds after signing as an undrafted free agent known for his raw strength.

On Tuesday night, when the Eagles officially moved Isaac Seumalo and K'Von Wallace to IR, they also released veteran TE Richard Rodgers from the practice squad and activated the practice windows for Jack Driscoll and Josiah Scott, both of whom could potentially fill the same role as the two players placed on IR.

With Ertz no longer on the COVID list, Richard Rodgers as a fourth option was no longer needed and the team could look to bring in another options.

On Wednesday afternoon, Cameron Malveaux was signed to fill that spot on the practice squad, per his agent.

In the preseason, the results really don’t matter. Hell, Gritty even had a sign for it.

“Welcome to the preseason, where everything’s made up and the points don’t matter,” the sign read. That may be true, but positive results are always nice.

The Flyers didn’t get a victory on Tuesday night, but they did get some positives. For one, every game that passes in the preseason that doesn’t involve adding to the injury report is important. The already battered Flyers achieved that in their preseason opener. Additionally, it was only the first game of many to come for a lot of players getting new experiences on the ice. There are players who are new to Philadelphia. There are players who, as younger prospects, have barely played any competitive hockey in the last 18 months.

With more time on the ice and in game settings, things like timing and chemistry can come. In the preseason opener, you just want to see signs that improvement could be on the horizon after the dismal season from a year ago.

With that, let’s dive into the Flyers 5 takeaways from Tuesday’s 3-2 overtime loss to the New York Islanders.

Islanders Down Flyers in OT in Preseason Opener

Following a sloppy first period, the Flyers managed to get on the board first. They eventually had to rally back for a late goal in the third period, before falling to the New York Islanders in overtime, 3-2, on Tuesday night at Wells Fargo Center.

Continue reading "Islanders Down Flyers in OT in Preseason Opener" »

The Flyers opened training camp on Thursday morning last week and have been hard at work for four days of ice time. Following an off day from on-ice activities on Monday, the Flyers will take the ice on Tuesday night for their first preseason tilt on home ice against the New York Islanders at 7 p.m.