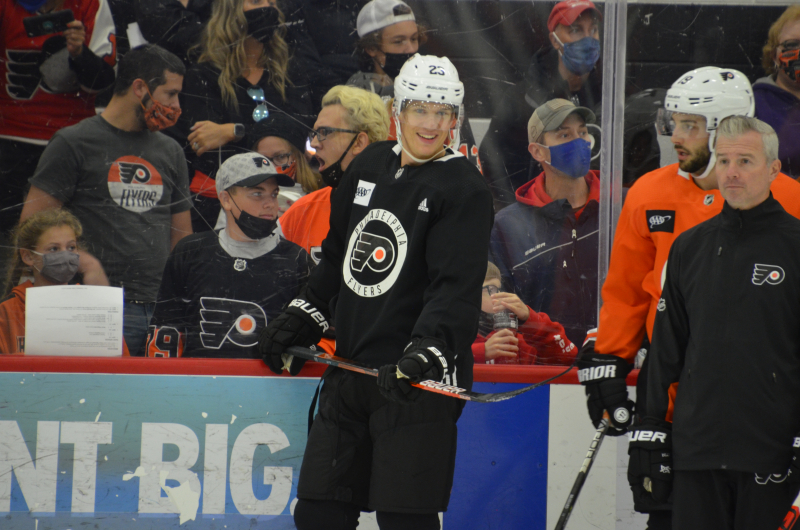 Sunday marked the final full day of Flyers training camp practices before the preseason arrives. A small schedule adjustment by Alain Vigneault will move a scheduled off day from Wednesday to Monday. The Flyers open the preseason on Tuesday night against the New York Islanders and will have a gameday routine with morning skate on Tuesday.

It was also the first time the Flyers ran special teams units. This served as the first indication of who will play on power play and a few potential combinations for the penalty kill.

The top power-play unit featured Claude Giroux on the left side, Sean Couturier on the right, Travis Konecny in the slot, James van Riemsdyk at netfront and Keith Yandle at the point. At times, Giroux and Couturier swapped sides.

The second power-play unit featured Cam Atkinson on the right side, Derick Brassard in the slot, Joel Farabee at netfront, Ivan Provorov on the left side and Ryan Ellis at the point. Morgan Frost also rotated in at the slot position that Brassard was playing, and several times Ellis and Provorov switched spots.

With the previous players dressed for the power play, the penalty kill featured a unit of Scott Laughton, Nate Thompson, Travis Sanheim and Justin Braun. Another unit included Oskar Lindblom, Nicolas Aube-Kubel, Rasmus Ristolainen and Adam Clendening. When the two sides came together for scrimmage and were more mixed, Lindblom got netfront power-play time, Giroux and Couturier were a forward unit on the PK, and Lindblom was joined by Atkinson, Provorov and Ellis on a PK unit. All of these combinations figure to be in use during the preseason.

The groups were split during these drills prior to the scrimmage, and the group that took part in special teams work seemed to be an early indication of the possible final roster to this point, prior to playing any games. That group was made up of the following:

The Flyers may only be able to carry 22 players due to cap constraints, but nonetheless, it is a group that resembles a possible NHL roster.

In the scrimmage at the close of Sunday’s practice, Team Orange defeated Team Black, 4-3. The scrimmage featured two 25-minute periods with running clock. The final six minutes of each period were dedicated to power-play time, with each team getting a three-minute power play.

The first scrimmage of training camp is almost a reward of sorts. After multiple days of drills, it allows the players to get the competitive juices flowing as they prepare to take the ice in game action.

As expected, Sunday’s scrimmage featured its share of growing pains, but also was a good way to get things going. A large crowd packed the Flyers Training Center in Voorhees to take in the action, easily the largest of training camp so far.

“It was great to see a jam-packed place here today,” Vigneault said. “I thought the pace was good. The execution was what is expected at this time of the year. There wasn't obviously, an over amount of physicality, which is normal for guys playing against one another. There were a lot of good stick position, good plays, and a couple of real good saves. For our first real scrimmage there, we worked a little bit on our specialty teams before. We also worked on it during the scrimmage. It was a first overall pretty good day for that.”

“It was most fun to see all the fans here. That was crazy,” Oskar Lindblom said. “It's still tough, first game of the year. It’s tough to get in the timing and all that, but I think overall, we played a pretty good game.”

In addition to getting the competition really going, the Flyers are spending this training camp and preseason trying to develop as much chemistry as possible in a short amount of time. Placing guys like Derick Brassard and Cam Atkinson together in multiple situations has been a benefit. The pair played together in Columbus and have a strong friendship.

On a 2-on-1 drill earlier in the session on Sunday, the duo struck for multiple goals, showing off the chemistry they already have.

“The things that we're trying to see right now is who does have chemistry with one another and who's going to make this team, the best possible team,” Vigneault said. “I know those guys go way back. I've liked both of them. Both the energy that they've brought and the enthusiasm they've brought so far. Like I said, we're going to try different things during camp. Putting those two guys together during exhibition is definitely one of the things that we're going to look at and see how they do.”

They have also been sharing ice time with Lindblom, who feels like their line is building momentum heading into the first game.

“It’s been good. Two great players and two great guys,” Lindblom said. “They’ve been around the league for a good amount of time, too. Just trying to find a momentum in our game and find a shot up there. Probably going to take some time, but we’re on a roll. Pretty good right now.”

When Ryan Ellis was acquired, it was the big offseason acquisition the Flyers needed to make. They needed to find a playing partner for Ivan Provorov that delivered a similar stability he had two seasons ago.

Ellis has already been described as having many of the same qualities that Matt Niskanen had. Vigneault not only notices the performance, which has certainly been smooth and steady from Ellis to this point in camp, but also how he conducts himself off the ice.

“You can tell as soon as you meet the guy, see him on the ice and off the ice, the way he behaves like, he's a real pro,” Vigneault said. “I see him spending a lot of time with Provy off the ice, talking to one another. On the ice, he's always looking to help steer the right way. His teammates have had some real good conversations with him since he's been here and since I've been here. Everything that he was promised to be, it's exactly what I've seen so far. He's going to be a real big addition to our team.”

Ellis is certainly adjusting to new settings. He had played his entire career in Nashville and is still learning some things about the Flyers system, while also trying to lead.

“It’s about getting everyone on the same page on the ice and I’m also learning a new system too,” Ellis said. “I’m out there asking questions and if I see something that I thought was wrong, I’ll bring it up. Sometimes I’ll get taught and sometimes I’ll try to teach. Honestly, the game is a lot easier when everyone knows what the next guy is going to do. I try to be vocal, one on the ice but two with understanding and making sure that everyone understands what's happening out there.”

In those situations, Ellis can certainly lean on Provorov for guidance. While Provorov can certainly benefit from another steady presence on the ice, Ellis takes note of Provorov’s attitude and work ethic off the ice and strives to be the same.

“Provy is a beast in the gym, so I kind of just follow him around. I just want to get as big as Provy and do my thing with him,” Ellis said. “He loves the game. I didn’t think that anyone loved it more than I did, but he’s right up there. He’s always here early. We always get here at the same time. Like I said, we just follow each other around and try to do our best to get to know each other.

“We’re trying to get to know each other on and off the ice as much as possible. Honestly, I’m kind of just following him around. We’re working out together, riding the bike together and obviously, skating together. I just want to get to know him as a person and a player as much as possible and before game one. I think that chemistry goes a long way when you’re friends and buddies off the ice. I think it promotes good things on the ice.”

The Flyers have a complete off day on Monday. On Tuesday, there will be two on-ice sessions – one for the playing group and one for the non-playing group – starting at 10:30 a.m. The Flyers then take on the Islanders at 7 p.m. at Wells Fargo Center.