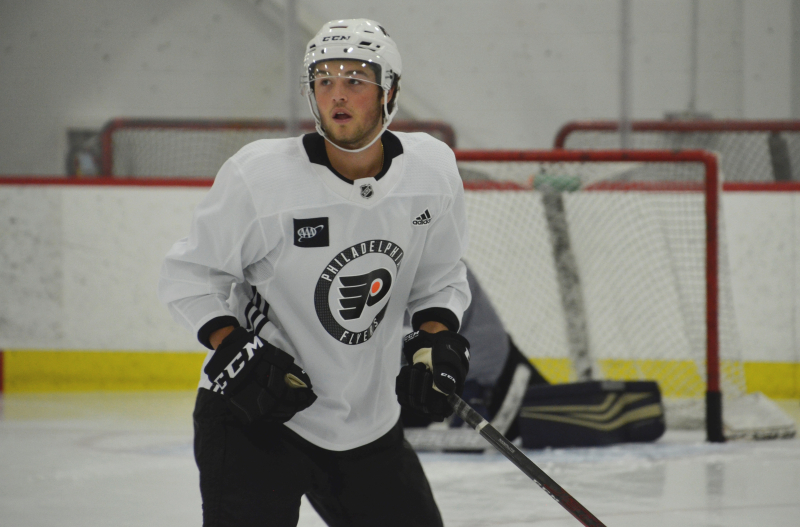 The lead group at Wednesday’s practice for the Flyers seemed to say a lot about where the team’s roster sits through the first game of the preseason. There is a clear cut group of leaders to make the final roster on Oct. 15 and a few interchangeable parts that could make up the final few spots.

There were a couple of small changes to that group at the last minute. Cam Atkinson did not practice, taking a maintenance day. Alain Vigneault said that Atkinson was not scheduled to play on Thursday anyway.

In fact, Thursday’s lineup in Boston for the Flyers second preseason game will feature a bunch of new players who did not suit up on Tuesday night. Only two players will return to the lineup: veteran defenseman Nick Seeler and prospect Tyson Foerster.

Foerster had a solid rookie camp and has turned heads so far, clearly drawing the eye of Vigneault to include him among the regulars.

“Any young player that comes to camp has got to get our attention. If you want to make this team, you’ve got to go out and play to your strengths and your abilities,” Vigneault said. “In Tyson’s case, I’m looking from what I saw last year at Christmas and what I’m seeing now and when I saw rookie camp, and I see definite strides the right way. There’s definitely solid improvement on his part.

Foerster played on a line with Connor Bunnaman and Isaac Ratcliffe on Tuesday. He’ll have new linemates in Thursday’s game. Vigneault also said that Foerster slots in on the second power-play unit as well, which also factored into him playing for a second straight game.

With only Foerster and Seeler returning to the lineup, this will mark the preseason debuts for names like Rasmus Ristolainen and Travis Sanheim, as well as Morgan Frost, Joel Farabee and James van Riemsdyk.

Other members of Group A that figure to be bubble candidates for the final roster included Jackson Cates, who took the place of German Rubtsov in that group on Wednesday. Bunnaman also remained with that group. Defensively, Seeler and Adam Clendening are both part of the group and appear to be vying for the seventh defenseman role.

Vigneault noted that the team would prefer not to use Cam York or Egor Zamula in a role where playing time will be limited. He added that the salary cap will determine how many extra players they can carry – most likely one forward and one defenseman.

There was some unfortunate news regarding a couple of Flyers injuries. First, Tanner Laczynski will be having surgery on his other hip after suffering the injury in camp. Vigneault estimated that will cause him to miss most of the season.

Additionally, the team is still in the process of determining if Wade Allison will need surgery for a high-ankle sprain suffered in the final rookie game. For now, his timetable to return is indefinite, but it would become clearer with the decision to have surgery or not.

The team gets back on the ice on Thursday night for the second preseason game against the Boston Bruins at 7:30 p.m.