Eagles Flyers Phillies Sixers About Us Write For Us
Previous month:
August 2021
Next month:
October 2021

About one week ago, the Eagles were hit with the tough news that they were losing two key players, one for the season.

On Tuesday, The Athletic's Zach Berman reported that Isaac Seumalo has a Lisfranc injury and will be placed on IR.

The timeline for an injury like this is often over a year before the player gets back to full strength, so Seumalo's season will be done. That means the Eagles offensive line will be down both starters at the guard positions and were without left tackle Jordan Mailata this week already. 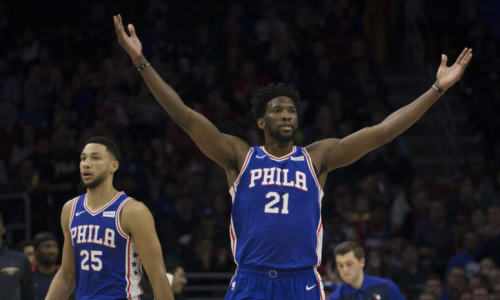 PHILADELPHIA, PA - NOVEMBER 21: Joel Embiid #21 and Ben Simmons #25 of the Philadelphia 76ers react against the New Orleans Pelicans at the Wells Fargo Center on November 21, 2018 in Philadelphia, Pennsylvania. (Photo by Mitchell Leff/Getty Images)
Cue up the classic bit from Seinfeld, “it’s not you, it’s me.”

We know that Ben Simmons wants to leave Philadelphia and now we know one of the reasons why.  Joel Embiid. Simmons reportedly no longer wants to play with the other face of the franchise.

The Athletic’s Sam Amick (subscription required) reports that Simmons believes his style of play doesn’t mesh well with Embiid and a change is needed in order for him to succeed.  Simmons is aware that the organization holds Embiid in high regard and values his input.

Doesn’t mesh well.  So, not taking shots and/or going for the easy dunk doesn’t mesh well with one of the most dominate centers in recent NBA history.

But it’s “nothing personal” adds Amick.  Simmons has simply decided that his career is better off without partnering with Embiid despite the fact that the All-Star center creates more space for Simmons to excel.

Simmons is going to go somewhere else and he will put up his points and make his All-Star games.  But it will be empty stats.  He passed up his opportunity at greatness the same way he passed up a clear, game changing dunk.

Wow! That was ugly. The Philadelphia Eagles were soundly beaten by their “supposed” NFC East rivals, the Dallas Cowboys, on a nationally-televised game that most Philadelphia fans would sooner forget. It couldn’t have been the spotlight moment that Eagles head coach Nick Sirianni envisioned, as the Cowboys manhandled the Birds on both sides of the ball and left fans wondering if their week 1 victory against Atlanta was just a mirage.

Let’s start with the Dallas running game. The Eagles defensive line was systematically blown off the ball on nearly every snap. The Cowboys one-two punch of running backs Ezekiel Elliott and  Tony Pollard caused the Eagles fits all night. Elliott, specifically, bore a hole in the Eagles defensive line, stiff-arming linebackers and churning his tree-trunk legs over the Eagles’ secondary. First-year Eagles defensive coordinator Jonathan Gannon had no answer for the Cowboys offense as the Bird’s D was consistently pulverized and penalized.

The Eagles offense was no better. Hurts, the seemingly anointed starter of this season, came up small time and again. Similar to last week, Hurts short-armed his receivers or threw behind them completely. His deep ball was off, but more troubling, Hurts couldn't connect with the simple stuff. Six yard outs became treacherous, as the Eagles’ starting quarterback seemed to overthink every pass and press every play.

Postgame Report: Eagles Embarrass Themselves On A Monday Night

The Eagles went to the locker room at halftime having been stepped on the whole first half.

The play was bad, but the coaching was terrible - three runs against a team with a decimated defensive front? It takes skill to call plays that poorly.

There was a brief glimmer of hope on a single, scoring drive where the offense got jolted by a huge catch from Quez Watkins and then there were real plays called that targeted the tight ends and running backs who have been open on nearly every play this season, but the plan went back to forcing it to Devonta Smith on almost every play (other than ridiculous plays like a non-run where all the offensive lineman ran downfield and didn't block) and somehow the Dallas defense was able to catch on. It's truly a mystery how.

The Eagles (1-1) visit the Cowboys (1-1) in week three of the regular season. The rivalry game was dominated throughout the first half by the Cowboys who controlled both sides of the ball and lead, 20-7. Here's what we saw in the first 30 minutes of action:

The first half for the Eagles went about as poor as possible. The Eagles only handed the ball off two times and one of those was a Sanders carry for 24 yards, one of only three first downs the Eagles picked up in the first two quarters.

Hargrave had a massive first half for the Birds. The second year Eagle got to Dallas quarterback Dak Prescott on the Cowboys’ second drive of the game, forcing a fumble that was recovered by Fletcher Cox in the end zone for a touchdown. Hargrave continued to make his presence felt, and got a key pressure on a 2nd-and-10 that led to a punt two plays later.

Philly’s defense had an atrocious first half, giving up 261 total yards and 20 points. Prescott was 13/16 for 148 yards and a touchdown, and the Cowboys rushed for 118 yards, continuously feeding Ezekiel Elliott and Tony Pollard (more on them below).

The Cowboys running back duo of Elliott and Pollard torched the Eagles all throughout the first half. Elliott led the way for Dallas, rushing 11 times for 60 yards and two touchdowns, and Pollard pitched in 56 yards on 10 carries. Containing Elliott and Pollard in the second half is essential for the Birds to complete the comeback.

Credit to @AidanDoc_ who was the first to come across it! pic.twitter.com/Jgh1fQZP1I

It’s that time of year again! The NBA season is upon us and, like clockwork, images of new alternate jerseys magically start to hit the internet.  Just in time for fans to go out and buy them before hitting their favorite barn to watch some hoops.

The Sixers alternate jersey was leaked today and it’s pretty awesome.  The jersey is a throwback to the style worn on the hardwood from 1971-1976 by players such as Billy Cunningham, Hal Greer, and George McGinnis.

New @sixers jersey seems to have leaked today. What do we think, fans? https://t.co/fDdxrCg9Rp pic.twitter.com/TggcmsRLl9

The jersey has red, orange, green, and blue side panels that are a nod to the mid-court logo at The Philadelphia Spectrum.

Eagles-Cowboys Preview & This Weekend in Football

Doc & Brett take a look at the huge MNF match up between the Eagles & Cowboys.  What are the keys to victory and can each team overcome injuries and loss of players.

Plus, the Giants stink and who is trending up, trending down after UFC 266!

The Show is Supported by:

From Section247Sports.com, Like a Morning Show...But All The Time!  Doc & Brett talk all things football, combat sports, and more!

Next man up has been used far too many times by the Eagles over the past few seasons, but they will have to follow the mindset once again Monday night.

Not listed on this week's report are Brandon Brooks and Brandon Graham, both of which are now on injured reserve for their own injuries.

For the Cowboys, their own lines are also beat up and. after an attempted bribe, will also be missing La'el Collins due to his suspension.

YWT: The Philadelphia Flyers Podcast - YWT #125 - Something To Prove

The YWT Podcast is back and the preseason is about to begin with training camp a few days underway. The Flyers continue to make preparations, and the guys are here to look at some of the highlights of rookie camp, some unfortunate injury updates from the start of camp, and some of the early line combinations on display at camp.

Kyle Collington and Kevin Durso discuss some of the things that have happened so far, the impact of injuries to Kevin Hayes, Sam Morin, and Wade Allison, break down the potential lines, and look ahead to Tuesday's preseason opener.

Many Phillies fans want serious October baseball, but the mere mention of those aspirations can draw parental-like smiles at best and sanity questioning at worst. Realistically, some locals will have doubts until the last pitch of the Fightins’ campaign in October.

“At the height of laughter, the universe is flung into a kaleidoscope of new possibilities.” - Jean Houston

Prior to Opening Day, fans had individual predictions from below .500 to slightly above the midpoint. But the Fightins have exceeded some expectations already even if they finish with only 81 victories despite six remaining contests. Interestingly, some may convey disappointment with a team they didn’t believe in.

If there are reasons to doubt the Phils, it could be pointing to bullpen games, but the Atlanta Braves have one per rotation turn as well. Or, perhaps, it’s concentrating on what the Phillies are missing instead of what they have. Ergo, they are without Rhys Hoskins but have Zack Wheeler.

I’ve also noticed a defeated attitude in some, while others had already given up any hope of the red pinstripes making the postseason. But when you consider your original expectations, this roller-coaster September is better than nothing: The norm you forecasted.