Many Phillies fans want serious October baseball, but the mere mention of those aspirations can draw parental-like smiles at best and sanity questioning at worst. Realistically, some locals will have doubts until the last pitch of the Fightins’ campaign in October.

“At the height of laughter, the universe is flung into a kaleidoscope of new possibilities.” - Jean Houston

Prior to Opening Day, fans had individual predictions from below .500 to slightly above the midpoint. But the Fightins have exceeded some expectations already even if they finish with only 81 victories despite six remaining contests. Interestingly, some may convey disappointment with a team they didn’t believe in.

If there are reasons to doubt the Phils, it could be pointing to bullpen games, but the Atlanta Braves have one per rotation turn as well. Or, perhaps, it’s concentrating on what the Phillies are missing instead of what they have. Ergo, they are without Rhys Hoskins but have Zack Wheeler.

I’ve also noticed a defeated attitude in some, while others had already given up any hope of the red pinstripes making the postseason. But when you consider your original expectations, this roller-coaster September is better than nothing: The norm you forecasted.

For some, there is the adjustment from their April thinking to their current expectations. To illustrate, some believed the Fightins would be a .500 squad with no playoff shot whatsoever. Now, they question manager Joe Girardi’s decisions.

It’s past time to “pack away” the ifs until 2022 because the Phils only look lackluster when they have trouble scoring. However, the 28 players in the clubhouse know the ballgame isn’t over after only 3-4 innings. Translation: All clubs look flat before they start plating runs: Offensive production doesn’t always take place early.

Over the years, the hot team at September’s end usually surprises everybody, as they advance from one series to another. In fact, the reason for two wild-card berths is owners don’t want a division champion with 95 triumphs to face elimination due to the club on fire.

Even though major league playoffs involve 10 franchises with at least a game 163 and eight with one postseason series, many veteran stars never experience winning a division or a wild-card spot. Yes, many Phillies are busting through tiredness until Oct. 3 to hopefully pop champagne corks.

Among those with no playoff appearances, Wheeler, Jean Segura and JT Realmuto are now within sight of serious October baseball. And Freddy Galvis was a rookie in the first 162 here with no postseason. However, Bryce Harper experienced the losing end of four NLDS opportunities, and others had limited exposure.

The red pinstripes will arrive in Atlanta on a 9-3 run and can surpass them in the standings by Oct. 3. In fact, Ranger Suarez may start game three against Braves ace Max Fried instead of Kyle Gibson. And the only reason for not making a switch is the right-heavy Atlanta lineup.

Following this three-contest battle, the Fightins will play three in Miami, and the New York Mets will finish with three in Georgia. At first glance, nothing stands out, but Noah Syndergaard and Jacob deGrom may work in that set to have offseason peace of mind. Small details with potential implications, no?

The nightmare of facing the Miami Marlins in Florida is due mostly to bad memories from previous years. Record-wise, the Phils are 8-8 versus the Fish and 3-4 in Miami. And they’ll have Suarez or Gibson in the first ballgame with Wheeler ready for the final contest of ‘21. Less stress, not stressless!

If a game 162 decides the National League East, the Colorado Rockies will not be enthusiastic about traveling to Hotlanta to make up the rainout contest of Sept. 16. But having the factor of ending the Bravos campaign on Oct. 4 could soothe them if being the ultimate spoiler isn’t enough.

While the Phillies won the Pittsburgh Pirates series, the Braves had a more formidable opponent in the San Diego Padres. But Atlanta swept the set after losing the suspended game. However, the razor-thin margin for error only maximizes the drama for the hard-fought battles ahead.

For those waiting for the preordained September collapse, these three ballgames will be on Sept. 28-30. And while the red pinstripes have been victorious in nine of their last 12, the Braves have gone 7-2. Homewise, the Fightins were 7-3 against the Bravos but went 2-4 in Atlanta for a 9-7 mark overall.

If this series doesn’t decide the NL East, the Marlins, Rockies and Mets could be the final “arbiters” of 2021. But the Braves best starter against the Metropolitans will be Ian Anderson, while the Phils will have Gibson or Suarez and Wheeler in Miami. So, Atlanta still has obstacles to overcome.

When locals peruse the rosters of first-place clubs, they feel the Phillies have no shot. So, what can they do to make the postseason and some noise if they get there? Play as a team! 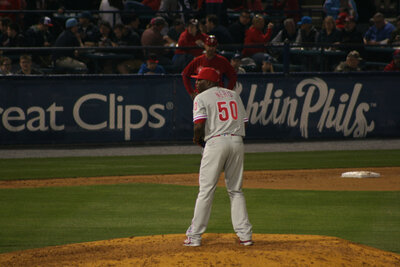