Young Players Will Have to Earn Spots with Flyers 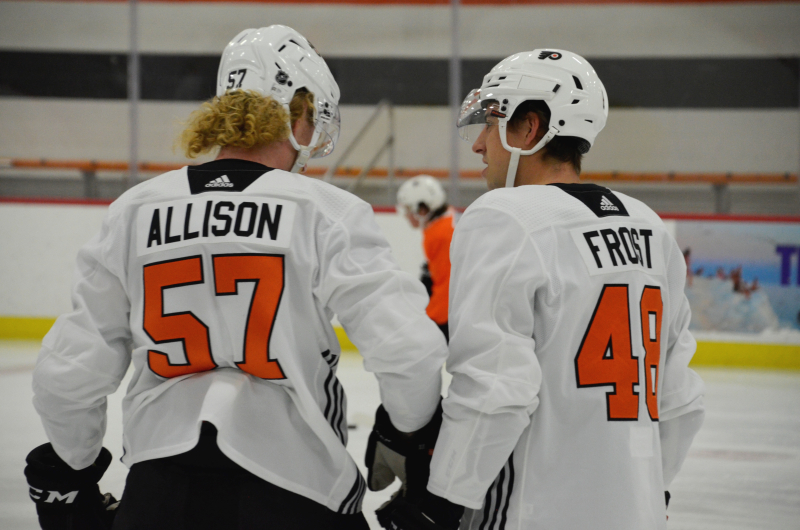 A new season dawns for the Flyers with the start of Rookie Camp on Thursday and main training camp just a week away. This is where the preparations for the upcoming season will begin.

It’s been an offseason of change for the Flyers. Multiple trades and short-term veteran signings dominated the Flyers offseason, making way for several new faces as the team shook up the core. Gone are names like Jake Voracek, Shayne Gostisbehere, Nolan Patrick, and Brian Elliott, in are Ryan Ellis, Rasmus Ristolainen, Cam Atkinson, Keith Yandle, Derick Brassard, and Martin Jones.

But what does this do for the young prospects within the organization? Is there still a chance for them to make their impact on this roster this season?

The possibility exists for sure. It always does. The road to get there is just going to be much more difficult this time around.

“That's where you want to get to as an organization. You want to make it so that young players have to earn their spot,” Flyers GM Chuck Fletcher said on Tuesday. “You want the competition level to be high. That's how you get better. That's how young players get better. As we get deeper and as our group matures, we want this to be a difficult team to make. That will certainly ensure that we have a high-end team here.”

Last season, the Flyers’ response to the departures of Matt Niskanen, Tyler Pitlick, and Nate Thompson was to place their trust in prospects.

Morgan Frost got hurt and was done for the season four games in. Phil Myers took a step back in a greater role. Patrick and Oskar Lindblom were not the reinforcements they were anticipated to be following long layoffs from game action. As the season progressed, the Flyers also tried other options. Egor Zamula was called up. So was Cam York late in the season. Tanner Laczynski, Maksim Sushko, Jackson Cates, and Wade Allison.

Those names will certainly be ones of focus in the next few days, as the Flyers hold a pair of on-ice sessions on Thursday and Friday before taking on the New York Rangers prospects in a pair of rookie exhibition games, concluding on Sunday afternoon in Voorhees.

Allison showed signs of being a full-time roster fit last season, playing in 14 games and finishing with four goals and seven points, a good foundation to build upon as camp begins. Frost has been at the next level before, playing in 20 NHL games in 2019-20, but after long layoffs due to the pandemic and then last season’s injury, it’s possible some time in the minors could benefit him early.

Others like York, Zamula, Laczynski, and Cates all have fewer than five NHL games under their belt. Signings like that of Yandle, Brassard, and Thompson are clearly designed to create an insurance policy if the Flyers decide to give these young players more AHL time. There are also newcomers like Tyson Foerster and Samu Tuomaala that will be looking to impress and earn spots in the minor leagues, getting on the radar of the big club in the process.

No prospect in Rookie Camp will make the team based on this weekend. It’s early in the process, and nearly three weeks of training camp will take place before final roster decisions are due ahead of the season opener on Oct. 15. But Rookie Camp does begin the real work. It allows the team to go to work on things that will be implemented during the season, much more so than just running drills and working on specific skills.

“Development camp is one thing. We throw a lot of things at these kids and probably try to take them out of their comfort zone in certain situations,” assistant GM Brent Flahr said. “A lot of the situations aren't game situations. They're skill situations, and we're trying to improve little facets of their game. Getting into the camp here, the intensity level is going to go up in practices and battle drills. We're going to be able to evaluate players in games here. There are a couple kids here that have shown well for themselves and coming in in tremendous shape. We'll see how they do.”

“The expectation is that you better be ready to come and put your best foot forward,” Fletcher said. “Having said all that, it's also a great opportunity for Ian Laperriere and his coaching staff to get to know this group and for this group of players to get to know the coach. It's an opportunity to start to put in some systems and start to build towards the season. It's also an opportunity for the players to get their feet wet, maybe get rid of some of the nerves before the main camp starts. There's a lot of different things involved.

“I think it's just a great opportunity for the players to have the limelight shining on them for a few days and have the full attention of everybody in the organization.”