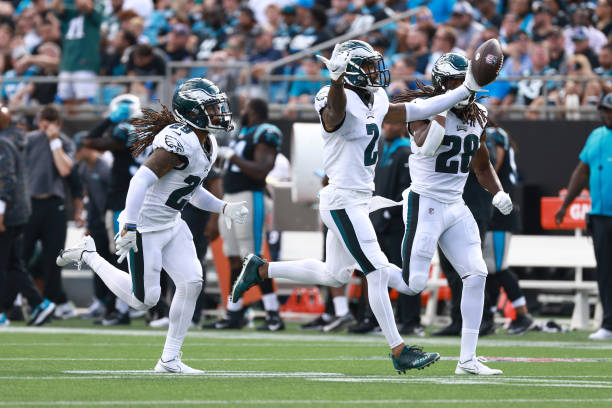 Better late than never. The Eagles offense, which muddled its way through most of the day against the Carolina Panthers, suddenly caught fire in the 4th quarter en route to an impressive, hard-fought 21-18 road victory. Backed by a ball-hungry defense and a special teams unit that blocked its first punt in four years, the Eagles now find themselves with a 2-3 record and reason for hope.

The 4th quarter comeback would not have been possible without the Bird’s hawkish defense. The defensive line, led once again by Javon Hargrave, harassed and sacked Panthers quarterback Sam Darnold all afternoon. And “Big Play” Darius Slay finally lived up to his moniker, intercepting Darnold not once, but twice, as the Eagles secondary flew around the field breaking up deep balls and delivering big hits.

After getting shredded last week by the Chiefs offense, it was promising to see defensive coordinator Jonathan Gannon’s crew regroup and show flashes of real attitude. It’s been a long time since an Eagles defense took over a game. We’d love to see more of this, especially if the Eagles have any shot at keeping pace with the surging Dallas Cowboys.

Once again, costly penalties nearly sunk the Birds. For the second week in a row the Eagles offense had a touchdown nullified by an illegal wide receiver pick play in the endzone. Do not adjust your television screens- it appeared to be the exact same illegal play that cost the Eagles a touchdown against the Chiefs a week ago. To commit penalties is one thing. To commit the same penalties, after a week of preparation, is unforgivable. Eagles head coach Nick Sirianni must do a better job at addressing his team’s miscues, as the Eagles are far and away the highest penalized team in the league.

Eagles quarterback Jalen Hurts had an inconsistent game, but came alive when it mattered most. For the better part of three quarters Hurts relied on ineffective dump-off passes and slow-developing screens that were frequently blown up by Carolina’s defense. The Eagles offensive line did a nice job opening holes for running back Miles Sanders. Despite Sanders’ gains, he made two of the most perplexing plays in Eagles history, which nearly snatched defeat from the jaws of victory. As the Eagles sat on the lead late in the 4th quarter hoping to run out the clock, Sanders ran the ball out of bounds and stopped the clock. And then on the very next play...he did it again. Sanders’ head-scratching decision essentially gave Carolina two additional time outs. After the second out-of-bounds run Sirianni quickly whisked the running back off the field. Despite the win, the growing pains of a first-year head coach could be felt on both sides of the ball.

And now, to Hurts, and that impressive 4th quarter. The most comfortable Jalen Hurts looked all day was when the Eagles needed a game-winning drive. Hurts delivered. Big time. It’s difficult to say why he struggled early. In the second half Sirianni switched to an up-tempo offense, which seemed to pay dividends. But it wasn’t until the 4th quarter, when Hurts was truly needed to shine, that he did just that. With his legs and through the air, Hurts took over the game and delivered a much-needed win. It was an impressive performance by the young quarterback during an up and down season. If Hurts can somehow manage to harness that fire throughout four quarters of football, the Eagles offense is capable of doing some serious damage with their speedy wide receivers.

But aside from their Week 1 victory against the Atlanta Falcons, the Eagles have failed to play an entire game at a dominating level. Hopefully the Eagles can find a way to meld their individual talents into an overall team victory.

In the meantime, the Eagles continue to discover just who they are as a team. And thanks to Jalen Hurts and an opportunistic defense, this information came by way of a savvy win.