Eagles Flyers Phillies Sixers About Us Write For Us
Previous month:
September 2021
Next month:
November 2021

The opening five games of the 2021-22 season have been tough for the 76ers. They have failed to be able to get into a rhythm, especially late in games, and have had to rely on trotting out Joel Embiid every game despite a sore knee that he re-injured in the opener when he banged knees with a Pelicans player.

Thursday night's win over the Detroit Pistons should have been able to come easier, but instead it took the Sixers down to the last minute to put away a winless Pistons team. That came despite a monster performance from Embiid, who finished the game with 30 points and 18 rebounds.

"We need to get way better," Embiid said after Thursday's win over the Pistons. "No disrespect to Detroit, but they haven’t won a game so we can’t be happy about our performance tonight. There’s nothing to be happy about. But as a team, we just played New York. It was a different energy level. They were tougher than us, more physical. They got what they wanted. We couldn’t guard our own men. We need to be way better defensively than we have been. We’ve got to guard our own men."

One of the big question marks coming into the season was just what kind of performance the Flyers would get from Martin Jones. The 31-year-old netminder was coming off three straight seasons with a .896 save percentage. Knowing he was going to likely shoulder games like Thursday’s back end of a back-to-back, the Flyers need to know they can rely on him.

If he plays consistently like he did on Thursday, the Flyers should be in good hands. Jones made 27 saves and was the difference in a 2-1 win over the Vancouver Canucks, lifting the Flyers to a 4-1-1 record to start the season.

There's something about coming home for Martin Jones. The new Flyers goalie entered Thursday's game with a 6-1-1 record at Rogers Arena, not far from his hometown of North Vancouver.

With 27 saves, Jones made it a seventh win in Vancouver, as the Flyers picked up another victory on the road trip, defeating the Canucks, 2-1.

The Flyers are right back at it on Thursday night. Less than 24 hours removed from a big road win against the undefeated Edmonton Oilers, the Flyers will face-off again and go against the team that opened their schedule just a couple weeks earlier.

The Vancouver Canucks come in with a modest 3-3-1 record in the first seven games of their season, including the 5-4 shootout victory in Philadelphia on Oct. 15. The Flyers will be looking for a different result as they look to build on Wednesday's win. Sixers president Chris Heck is such a tease.  Heck gave a sneak peek at the Sixers retro court that will pair with the Sixers' previously leaked retro jerseys.

A quick breakdown of the court:

Week 32 Recap: The Union Draw on the Road, and Also the Sky is Blue

It’s another away game and another draw for the Union. A win would have secured their spot in the playoffs, but a draw welcomed in a bunch of complicated scenarios and relying on other teams to win and lose in order for the Boys In Blue to clinch.

The Union got off to quite the ideal start, with Alejandro Bedoya collecting a pass from Daniel Gazdag and scored just 37 seconds into the game.

Despite having the advantage on the scoreboard, Toronto FC controlled most of the possession after the Union scored. The Union’s back four showed why they’re considered one of the best back lines in the league, calmly shutting down any Toronto counterattacks before they could reach goalie Matt Freese.

The rest of the first half remained fairly quiet, save for some promising offensive runs from Kai Wagner and Leon Flach that unfortunately didn’t turn into anything.

In the 63rd minute, Kacper Przybylko lost the ball after a scoring chance, and Toronto were quick to seize their chance to attack. Jozy Altidore grabbed a loose ball from the crowd of bodies in front of the net and rocketed a shot past Freese to put the home side level 1-1.

Things went from bad to worse, as Toronto’s Jacob Shaffelburg attempted to put a low cross into Altidore’s path. Union defender Jack Elliott tried to intercept the pass, but ended up putting it into the net for an own goal.

Jim Curtin then substituted Sergio Santos for Gazdag, and it proved to be the right move. Just seven minutes after falling behind, Wagner picked Santos out in a pocket of space and sent a laser of a pass that Santos was able to deflect into the net to even everything up 2-2.

It was game on as the Union hunted for the game-winning goal, including a brilliant run and pass from homegrown Jack McGlynn to Przybylko, but the Polish striker sent the ball just over the crossbar.

In the dying moments of the match, Jamiro Monteiro weaved through Toronto’s defense to pick out Przybylko in the middle of the box. The shot deflected off of Toronto’s Michael Bradley, and the Union argued for a handball and penalty to be given, but the referee didn’t indulge their request.

Continue reading "Week 32 Recap: The Union Draw on the Road, and Also the Sky is Blue" »

In the blink of an eye, three goals in the first period of Wednesday’s game between the Flyers and Edmonton Oilers turned to five. A sixth was scored in the first minute of the second period. But the game was ultimately won in a competitive and entertaining third period.

For the third straight game, the Flyers faced the “win a period, win a game” scenario, once again going up against some stiff competition to start the season. After falling short last Saturday against the still-undefeated Florida Panthers, the Flyers passed the test this time.

Led by newcomer Cam Atkinson, the Flyers got the only goal needed to break the tie in the third, helping them take down one of the NHL’s hottest teams to start the season.

Here are five takeaways from Wednesday’s win in Edmonton.

The Flyers faced the same situation in Wednesday's game as they did on Saturday. Facing an undefeated team, they could come away with a win and two points if they could just win a period.

One of the newest Flyers made sure of it. Cam Atkinson capped off his second two-goal game of the season with the eventual game-winning goal at 4:18 of the third period in the Flyers 5-3 win over the Edmonton Oilers. 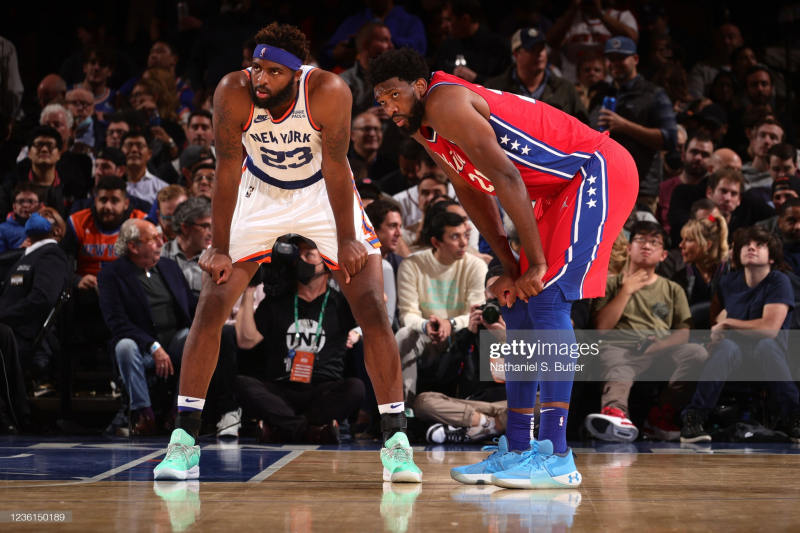 ESPN’s Ramon Shelburne is reporting that Joel Embiid is dealing with a “minor” knee injury that he suffered in the season opener against New Orleans.  Embiid collided with Jonas Valanciunas in that game and was unable to walk for two days according to the report.

.@ramonashelburne on Joel Embiid playing through injuries (via NBA Today).

"He told me after this game in New Orleans, he couldn't walk for two days." 😳

Embiid, who’s played in three games since the collision, told reporters that he “probably shouldn’t have played “against Brooklyn but wanted to be there for his teammates in the absence of Ben Simmons.  The All-Star was originally “questionable” for that game.

Kudos to Embiid for his team first attitude but if the Sixers want to have any chance at making a run, he needs to address the knee issues immediately.  Embiid struggled with a torn meniscus last year during the playoffs and it affected his effectiveness.

Embiid never had surgery on the torn meniscus, a procedure that is orthoscopic with a recovery time of six-to-eight weeks.  It would’ve been ideal to address this injury, which can linger without surgery, during the off-season.

After four games on home ice, the Flyers hit the road for the first time in the 2021-22 season. Their first test isn't any easier than their last.

The Flyers open a three-game Western Canada road trip against the Edmonton Oilers, another team undefeated with a 5-0-0 record. Wednesday's game will mark a second straight without Ryan Ellis in the lineup, making the challenge that much tougher.