Ben Simmons is rumored to be returning to the Sixers organization in the very near future.  Adrian Wojnarowski tweeted out this morning that Simmons' agent, Rich Paul, and Sixers officials have been in talks to move toward the return of the three time All-Star. The Sixers will continue to look for trade offers for Simmons upon his return.

Sixers officials and Klutch CEO Rich Paul have progressed in talks over recent days on a resolution to bring All-Star Ben Simmons back to Philadelphia in the near future, sources tell ESPN. Discussions are ongoing.

Ben Simmons has been absent from all team activities since they've reported for camp on September 27. He cut off all ties and communication with the organization over the Summer after losing in the Eastern Conference Semi-Finals to the Atlanta Hawks. Throughout the Summer, the Sixers and Simmons were in a tug-of-war with Simmons wanting out of the team but the team wanting to convince him to stay. The team was unable to find a suitable trade in return for Simmons that would give MVP candidate Joel Embiid a good enough chance at a title run. Daryl Morey and Doc Rivers both believed that Ben Simmons could still help to win them a championship, but Simmons believes his time in Philadelphia has come to an end.

Simmons signed a five-year $177.2 million max contract extension in 2019. He has four years and $147 million left on his contract, with $33 million being owed this season. Simmons has already taken fines from the team after not reporting for camp or any preseason games. If he misses the Sixers Monday night game against the Brooklyn Nets, he will have been fined a total $1 million so far.

View All Posts By Jake Finnerty

View All Posts By Jake Finnerty 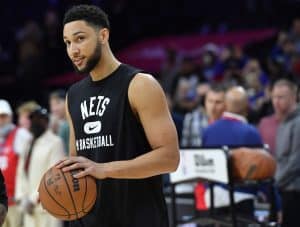