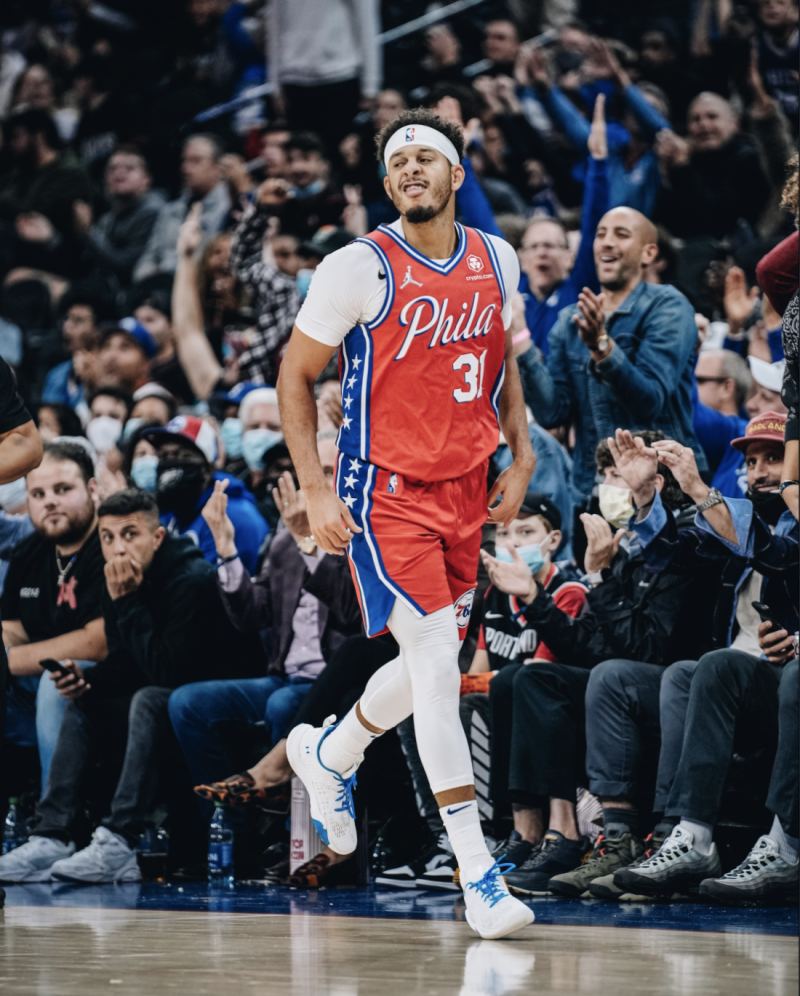 The Philadelphia 76ers had their best team performance of the young season on Monday night, defeating the Portland Trail Blazers 113-103.

The win came despite the team being without All-Stars Joel Embiid (rest) and Ben Simmons (personal reasons), and Tobias Harris was a late scratch due to being placed into the NBA's health and safety protocols. The team became even more short-handed when Danny Green was forced to leave the game early in the second half with a hamstring injury.

Rivers says he’s “a little concerned” about Danny Green, who he said asked out and had been grabbing at his hamstring on the floor. No update beyond that at this point

The 76ers, set to play five games over the next seven days, including two back-to-backs, will be without the services of most of their starting lineup at different points over the next couple of weeks. Embiid, battling a knee injury since the opener, will likely miss at least one game in each of the back-to-backs due to planned rest. Green, already ruled out of today's game against the Chicago Bulls, could miss anywhere from a few days to a few weeks depending on the severity of his hamstring injury.

Philadelphia will also be without Harris for the foreseeable future, according to a report by the Inquirer's Keith Pompey. According to the report, Harris was both symptomatic and a close contact of someone who tested positive for COVID-19. This means that, according to the NBA's health and safety protocols, Harris could miss at least 10 days.

However, all is not lost. Monday's win provided a blueprint for how the Sixers could win short-handed. The role players stepped up and head coach Doc Rivers switched up the game plan to involve a faster pace and more passing.

"It’s one of those games where I thought every single guy did something to help us win the game," Rivers said. “They kind of stayed within their roles. They understood what we needed getting into the paint and creating plays. Portland is a much-improved defensive team; they’re up, they’re hedging, they’re physical, they show. And it challenges you to move the ball, and I thought we did that tonight."

The 76ers assisted on 34 of their 43 made field goals, an incredible 79.1 percent rate. Five different players finished with five or more assists, led by Andre Drummond and Tyrese Maxey with seven each. The team also remained disciplined in the turnover department, committing only 10 turnovers.

Seth Curry led the team with 23 points, six rebounds and five assists. He has not missed a beat since last year's playoffs, when he was one of the hottest shooters in basketball. He is averaging a career-high 16.4 points per game while shooting 54.1 percent from beyond the arc through the first seven games of the season. Curry, after the game, commented on the team's adjustment playing without Embiid and Harris.

"We had a different style of play tonight — moving the ball around, playing aggressively as a team," Curry said after his big performance against Portland. "We pass the ball, we’ll get good shots the majority of the time tonight. But it was just picking my spots and when to just move it on."

Multiple players stepped up for the Sixers on Monday, including Drummond and Georges Niang. Drummond put together a fantastic stat line, tallying 14 points, 15 rebounds and five steals in addition to his team-leading seven assists. Drummond is an improvement over Dwight Howard at the backup center position due to his versatility and increased scoring potential, both of which were showcased against the Trail Blazers.

Niang had a career night while playing a season-high 31 minutes off the bench. He finished second on the team with 21 points while also adding in five rebounds and five assists. President of Basketball Operations Daryl Morey certainly hit on both of his free agent acquisitions this past offseason.

Monday's win was a complete, balanced team victory. The 76ers showcased a potential blueprint for how to win short-handed, and unfortunately they will have to put it to the test immediately. They begin a stretch of their schedule where they play five games in seven days with a matchup against the 6-1 Bulls tonight.