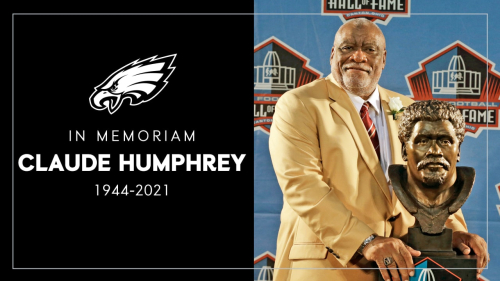 Some sad news in the world of football, former Eagles defensive end and Pro Football Hall of Fame member Claude Humphrey passed away at the age of 77.

Humphrey was a pivotal member of Dick Vermeil’s Super Bowl XV team. The Tennessee State product spent his first ten years with the Atlanta Falcons before a trade to Philadelphia reunited him with defensive coordinator Marion Campbell.

He recorded, unofficially, 14-1/2 sacks for the 1980 NFC Champion Eagles.  In a moment that Eagles fans will never forget, Humphrey was called for a so-so roughing the passer call in Super Bowl XV. Disgusted by the call, he picked up the penalty flag and through it back at the official.

Humphrey was officially enshrined in the Pro Football Hall of Fame on August 2, 2014.  He is considered one of the greatest pass rushing defensive ends of all-time accounting for 126-1/2 “unofficial sacks.” The NFL wouldn’t keep record of stats until 1982, a year after Humphrey retired.