Eagles Flyers Phillies Sixers About Us Write For Us
Hurts, Minshew and More: Where The Eagles Stand At QB
YWT: The Philadelphia Flyers Podcast - YWT #134 - What Has Mike Yeo Actually Done?

According to reports, Feb. 1 is a soft deadline for the CBA (collective bargaining agreement), so the Philadelphia Phillies faithful can anticipate headline-grabbing negotiations for roughly all of January. Meanwhile, many MLB supporters are complaining about deep-pocketed organizations not making a big splash before December.

If the Phillies want a playoff berth and 2-3 weeks of serious October baseball, there are many factors to consider. Taking it, however, to the next level was somewhat visible in the last three months of 2021. Moreover, a major incentive in 2022 will determine 2023’s earnings for almost 25 percent of the 26-man roster.

“Just give me 25 guys on the last year of their contracts; I'll win a pennant every year.” - Sparky Anderson

Every campaign variables are just below the surface, discounted or overlooked. But they determine the divisional winners and postseason-bound franchises. Realistically, finances, health, COVID-19, preparation and luck are roughly 50 percent of the magical summer fans will hope for in spring training.

Money is a difficult part for acceptance because many are unaware of the competition and cost. To illustrate, some believe the Fightins can eat $5 million of Didi Gregorius’ $14.5 million –$14 million AAV (average annual value)-- to free up money and move him. But teams prefer waiting for the Phils to cut him and pay the MLB minimum.

At any time, even a top star can suffer a long-term injury, and it could change the dynamics of the lineup, rotation and/or bullpen. Last season, the red pinstripes had missed Rhys Hoskins and Zach Eflin for one third of ‘21, and eventually the pressure affected the five-man staff and the heart of the batting order.

The pandemic’s variants leading to unpredictable challenges make on-field production even more limited. For instance, pro football and basketball are an early warning system for major league baseball to prepare for ‘22 simultaneously with the new CBA’s completion: Is it even possible? Yeah, flip a coin!

Preparation was a major problem going to a full 162 after interruptions and delays before and during a 60-game schedule. To paraphrase Sandy Koufax, anyone who says spring training isn’t necessary has never played pro ball. Translation: Questionable stats reflect a doubled workload affecting the second half and/or September.

As if all these obstacles aren’t enough, Charlie Manuel has stated many times baseball is 40 percent luck. Moreover, trades, signings, and all decision-making also follow the same thought process. And, so, a 90 percent expectation of offseason success isn’t realistic.

In their contract year, Kyle Gibson, Corey Knebel, Eflin and Gregorius must produce for a 2023 pact, and their production will equal its value. Ergo, the Phils have two three-slot starters, a closer and a shortstop who could rebound with good health. They are three needed hurlers and an up-the-middle defender.

At stake also are stars with club options, Aaron Nola needs a big summer for the Phillies to exercise his $16 million. To clarify, Nola’s salary for the next campaign is $15.5 million, but his AAV is $11.25 million. And Jean Segura will be playing for $17 million for ‘23; though, he doesn’t require more motivation.

Praised by Zack Wheeler and Bryce Harper, JT Realmuto had playoff fever, and his numbers are a true reflection of his attitude. In fact, Realmuto had 40 percent of his 125 hits and 42.5 percent of his RBIs in the last two full months. So, his performance also shows a star ready for serious October baseball.

The catcher’s work with the rotation will likely be more apparent in 2022. Now, he's familiar with the full five-man staff to go with a somewhat normal offseason preparation. And consecutive 162s should provide reliable statistics after a somewhat normal winter.

In ‘21, Wheeler may have been having more than just a career year, and it could have been his determination for a postseason berth. Plus he, Realmuto and Harper probably have the same goal except now with a stronger incentive. Something more, perhaps?

Wheeler’s stats indicate he tired in the second half due to only 71 virus-limited frames in 2020. But though the workload had affected his second half results, he excelled in September despite the fatigue of 182 ⅔ innings through August. And his final month proves his playoff desire.

If you watched most 2021 Fightins’ contests, two players stood out more than their numbers: Segura and Harper. They provided the faithful with an all-out effort on the diamond: coming through in big spots, running the bases, and defending their position with above-average leather.

Although his stats dropped off in the second half, Segura did blast 10 of his 14 bombs after the All-Star break. Following an all-out effort from Opening Day, the massive increase in workload finally slowed down the second sacker. Translation: He must pace himself in 2022 to be more of a down-the-stretch presence.

No star personifies an all-in desire to reach the postseason more than Harper. However, his tank was empty in the final week against the Atlanta Braves. But his second half numbers speak for themselves.

After almost landing a playoff berth, the Phils with a combination of these four starters and five others who could have a 2023 payoff ahead may finally have a champagne shower. And it means more players with something to fight for and more preparation for a full 162 will lead to a satisfying final game and? Mostly smiles. 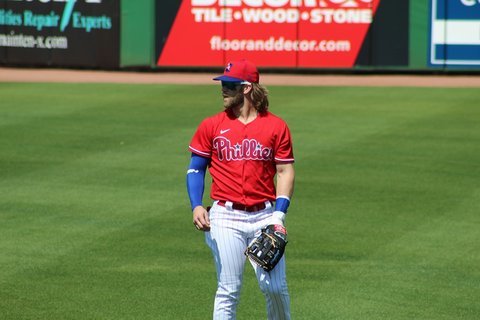 So many letters typed, so little substance communicated.

So if Harper was out of gas at the end of the season, does that mean he wasn’t ready for October?

It appears, and it’s unsurprisingly not clear, that you think that Gregorius might be worth re-signing. Does that mean you thought he was good signing in the first place? You probably did, but then, you also thought Klentak was a good GM too...