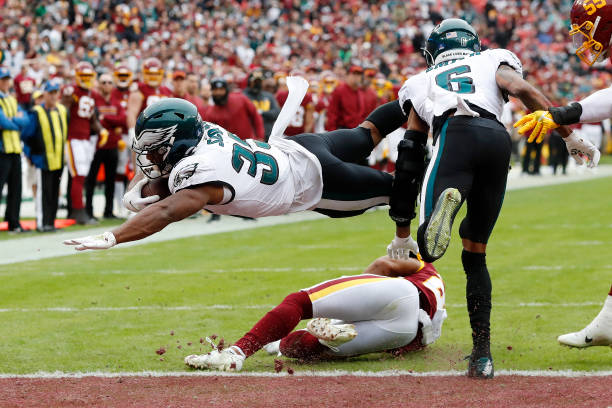 Well, it wasn’t easy. But nothing good comes easy, right? The Philadelphia Eagles marched onto FedEx Field in Washington on Sunday afternoon in hopes of continuing their campaign to make the playoffs. Three hours later they walked off one step closer to their goal. Philadelphia beat the Washington Football Team 20-16 in a game that required an interception from Eagles safety Rodney McLeod in the final minutes to close the deal.

Prior to McLeod’s brilliant end zone interception, the Eagles defense looked poised to cough up the lead as the clock wound down. Instead, Philadelphia goes into the final week of the season in control of their playoff future and buzzing with confidence.

The Eagles started the game slow. Like, really slow. They let the WFT saunter down the field on their opening drive and score almost effortlessly. Next, Jalen Hurts had a typical Jalen Hurts first half. Which is to say, mediocre to awful. The Eagles went into halftime trailing 16-7.

Although it wasn’t all bad for the Eagles in the first half. Running back Boston Scott scored a touchdown on a spectacular end-around dive from the goal line. Scott continues to show a crafty combination of strength and speed, and may have earned the right to be the Eagles featured back. Although it appears that Eagles head coach Nick Sirianni prefers variety in the backfield.

While Hurts’ numbers in the first half were middling, he did connect with tight end Dallas Goedert and wide receiver DeVonta Smith for some big gains. Hurts also hit some nice rollout passes and showed little sign of his lingering ankle injury.

The Eagles won today's game because of their excellent halftime adjustments. Sirianni leaned more heavily on the run in the second half, while simultaneously opening up the field with some deep balls. More importantly, Eagles defensive coordinator Jonathan Gannon figured out a way to put more pressure on WFT’s quarterback Taylor Heinicke. Heinicke was harassed consistently in the second half.

And then there was that interception. Washington had all the momentum during their final possession and it appeared Jonathan Gannon’s bend-but-don’t-break defense was about to break spectacularly. And then Heinicke sailed a pass in the Eagles’ end zone and Rodney McLeod stretched all of his 5’10’’ frame and hauled it in. The catch was reviewed by officials as all of Philadelphia held their collective breath.

The catch was ruled good and the game was essentially over.

Today the Eagles played hard, made the right coaching adjustments, and got a little lucky.

Let’s hope they can repeat this trifecta next week against Dallas.