Eagles Flyers Phillies Sixers About Us Write For Us
Flyers at Halfway: 3 Questions for the Remainder of the Season
YWT: The Philadelphia Flyers Podcast - YWT #138 - It's A Losing Streak

While some Philadelphia Phillies fans finger their worry beads and pray for a starter by trade or signing, they believe their National League East rivals have superior pitching. And some think picking up a hurler or two is a requirement for winning the World Series. First, make the playoffs!

Entering each season, MLB supporters –not just the Phillies faithful– have an unfounded fear of their divisional foes. Despite all the victory guarantees, though, from fans of the defending Fall Classic champions and an overspending club from Queens, health, COVID-19 and luck will also be factors for serious October baseball.

“Hope is not the conviction that something will turn out well but the certainty that something makes sense, regardless of how it turns out.” - Vaclav Havel

The best team in franchise history with 102 triumphs didn’t win the World Series. In 2008, though, Adam Eaton started 19 games for the five-man staff after 2007’s 10-10 mark with a 6.29 ERA. Ergo, the top club isn’t always victorious: The hot team usually is. And that’s why the owners added the obstacle of wild-card games.

For ‘22, the Washington Nationals are a shell of the 2019 champions. To illustrate, Stephen Strasburg has only worked 26 ⅔ innings in the last two campaigns and has yet to prove he’s healthy. Moreover, Patrick Corbin was 9-16 with a 5.82 ERA: his second consecutive poor summer.

The Miami Marlins are a young group still going through growing pains. Yes, they have Sandy Alcantara and Trevor Rogers atop the rotation, but the league will adjust to Rogers: Some regression is reasonable. But the Fish with youthful exuberance combined with some experience will now be a more challenging foe.

Except for the Atlanta Braves, National League East contenders have their starters already in place. And the defending champs, the offseason spending winners, and the second place 2021 Fightins are this article’s order. However, this is not an indication of how these organizations will fare in 2022’s divisional standings.

Max Fried will again be atop the Braves rotation after two solid campaigns –one for 60 contests– because Mike Soroka will miss another 2-3 months. Yes, Fried held his own during the regular 162 and through the entire postseason. Plus he must be healthy and effective for Atlanta to defend their NL East crown.

To the north, Jacob deGrom, the New York Mets ace, only pitched 92 innings before right forearm tightness ended his ‘21 in July. He’s questionable because he only worked 68 and 92 frames respectively in the last two years, and he must prove he’s healthy even with a potential innings limit.

After finishing second for the Cy Young Award by 10 votes, Zack Wheeler’s first two campaigns with the Phillies were a total success. Moreover, he had a 1.47 September ERA –second only to his 1.44 June ERA– despite tiring in mid-August.

After suffering a broken leg in the 2021 Fall Classic, Morton is questionable because he must prove he’s healthy and effective after his late October surgery. Moreover, he’s also 38 and age has played a role to end storied careers, like Doc Halladay (36), Cliff Lee (36) and probably Cole Hamels, 38. Father Time?

Max Scherzer could be the rare exception to be an ace at 40, but $43.3 million each for three summers is risky. For now, though, the Metropolitans’ strategy is to have a horse if deGrom’s tightness and inflammation difficulties persist. And if they plan on a divisional victory, they’ll need a top-tier stud.

Aaron Nola is also questionable after struggling for the entire 162 from Opening Day, so fatigue probably wasn’t the main problem despite going from 71 ⅓ to 180 ⅔ innings. However, his Phillies history is following a bad season with a good one: a 3.87 ERA (2019) and a 3.28 ERA (2020). His wake-up call?

With 30 major league starts so far, Anderson is currently a solid three, but will he handle the adjustments headed his way? Realistically, Braves supporters probably consider his success to be a given, but the opposition will search for holes in his approach. And they earn their living by doing just that.

What do the Mets have with Carrasco, who is almost 35? For campaign one, Carrrasco wasn’t healthy until July’s end or effective after returning. Therefore, he’s questionable going into ‘22, but he could bounce back: He has a solid track record.

Ranger Suarez is only questionable due to a workload increase from 106 to 180-200 frames for the 2022 Phillies. During ‘21, many starters tired in the second half, August and/or September due to workload-related endurance. Considering, however, his success as a setup man, closer and starter, many locals expect a two-slot arm.

Ynoa had punished his throwing hand by punching the dugout bench after a disappointing outing on May 16, and he didn’t return until August 17: three months on the injured list. Ergo, he’s questionable because he had only logged 91 frames, and his workload could double if he’s effective: He wasn’t from mid-August on.

After working 53 ⅓ innings in ‘20, Walker had excelled in the first half for 94 ⅔ of his 159 frames: He either tired and/or the new league figured him out after the All-Star break. And the familiar latter seems more plausible than the being-unknown former.

Before his Phillies stint, Gibson had nearly emptied his tank by June’s end, but he had a second wind in August with a 3.16 ERA for 37 innings. His workload had increased from 2020’s 67 ⅓ to 182 frames in 2021. Moreover, he has six average pitches in his arsenal. And if four are working, he’ll twirl six decent innings per start.

After success with Fried and Anderson, Atlanta had roughly five others who didn’t make the jump from prospect to their five-man staff. And Soroka after his excellent 2019 had an injury-plagued 2020 and 2021, plus he’s also questionable because he’ll miss 2-3 months: They’ll only count on him for 100 frames.

Despite his successful ‘20, Peterson’s shine wore off because the league had a book on him. Therefore, he’s questionable regardless of his season-ending injury, but does he have the talent to adjust to the hitters? Will he improve with growing pains, or will the Metropolitans drop him from their plans?

The Fightins could be without Eflin for 2-4 appearances, but the team has too many other needs to cover a questionable hurler for 0-4 weeks. Yet if the lockout goes to February’s end, he may not miss any time even if he needs to build up arm strength in Clearwater. Regardless, he had a 3.88 first-half ERA before July’s knee injury.

To sum up, the Bravos could have two open slots, and the Metropolitans might have deGrom, Scherzer and three question marks. But if the Phillies five-man staff is healthy, how many shots to win will they have for each turn through the rotation? Five! 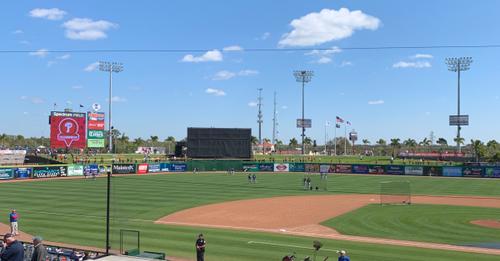