Eagles Flyers Phillies Sixers About Us Write For Us
How Long Can the Sixers Survive Without Ben Simmons?
Eagles "Healthy Scratch" Player on Verge of a Contract Incentive, Pay Him Anyway

Sixers' Sloppiness, Struggles Against Zone Defense Cost Them in Loss to Hornets 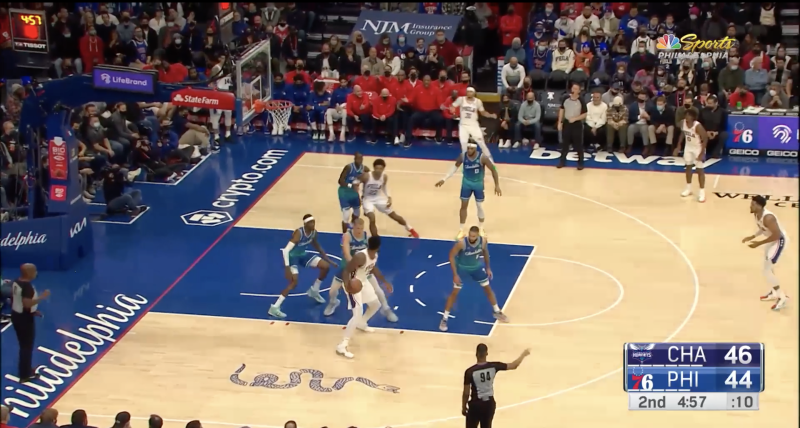 The Philadelphia 76ers' seven-game winning streak was snapped on Wednesday night at the hands of the Charlotte Hornets, 109-98. The Sixers' problems against zone defense continued and uncharacteristic sloppiness doomed them against a Hornets team that loves running in transition.

The first quarter swung back and forth, with Tyrese Maxey knocking down two triples to give the Sixers a slim 35-34 lead. The offense was clicking behind another strong start from Joel Embiid, who finished the game with 31 points to extend his streak of 30-plus point games to eight. However, the team committed four turnovers in the first quarter, something which would plague them throughout the game.

Charlotte flipped to a zone defense in the second quarter and the Sixers had no answers for it. They were held to just 15 points on 7-for-21 shooting in the quarter while also turning the ball over four more times.

The turnovers and sloppy play hampered the Sixers' offense all game long. They committed 17 turnovers on the night, leading to 23 Charlotte points. As head coach Doc Rivers said after the game, "I thought the ball stuck. We’ve been so good overall moving the ball and I just thought tonight, we didn’t do that. The ball stuck on every possession. We rarely got it from side to side."

The Hornets used zone defense for much of the game, and the Sixers simply were not ready for it. This is not a new issue for the Sixers, they have struggled against zone defenses for the past three or four seasons. To still not be ready and equipped for it at this stage is indefensible.

98 points against the 28th-ranked defense is just awful, let alone one that has poor interior defense. Sixers had no clue how to deal with the zone, despite Charlotte consistently running zone under Borrego.

Just did not come into this one with the proper game-plan.

The ways to beat zone defense include having crisp ball movement, hitting your open shots and potentially having at least one player who can crack the zone by slashing to the basket. The Sixers were terrible with the ball movement for much of the game, but they actually shot the ball well (46.6 percent from the field and 40.0 percent from 3-point range).

Seth Curry is the team's best outside shooter, but he only took seven shots. Maxey is the team's best guy at getting to the basket, but he struggled in his first game back from the NBA's health and safety protocols. He got off to a quick start, scoring eight points in the first quarter. The team then went away from him for much of the rest of the night, which is inexcusable considering his ability to drive to the rim could have helped a lot against Charlotte's zone defense.

If the Sixers were better prepared for facing the zone defense, they would have began changing their offense away from running it out of Embiid in the post, where the Hornet's zone would crash in around him.

Tobias Harris, who finished with 17 points on 6-of-14 shooting, spoke after the game about the team's offensive struggles against Charlotte.

"I just thought we got a little too stagnant offensively," Harris said. "We weren’t really able to run throughout the game. You gotta give them credit, they made a lot of shots, but we just didn’t have our pace. I didn’t think we had enough ball movement in the half court. They showed zone a little bit and I think that stopped our momentum as well, but it was just too many sloppy plays all around that we needed to be better at on the offensive end for us to win the game."

The Embiid-Drummond lineup worked well against the Magic, but it didn't tonight against the Hornets. The spacing was terrible (as seen below) and the offense felt clunky. Charlotte switched back to a zone defense and this lineup had no answers. #Sixers #NBA https://t.co/zn9GQtt4KG

Charlotte was utilizing a successful zone defense against Philadelphia, and Rivers' response was to go to a two-bigs lineup which would crowd the painted area.

"We were awful, and let’s try something," Rivers said. "It’s part of what you do as a coach. You try to shake it up, see if we can get something. It actually looked OK for us. Defensively, we got some stops and rebounds. But it’s one of those nights where nothing was (working) and we tried to throw stuff in. I do like that lineup. I don’t necessarily like it against that team, but it wasn’t bad for us."

Shooting and ball movement are the two key things necessary to beat a zone defense. The Embiid-Drummond lineup brought neither of those two things. When Rivers went to that lineup, he should have instead gone with a lineup centered around Embiid and four players who can shoot the ball from outside.

The sloppy play, poor ball movement and high amount of turnovers are all uncharacteristic for this Sixers team. However, their struggles against zone defense continue to haunt them. If they fail to correct the issue, it could be something they see more and more often.