While many Philadelphia Phillies and Major League Baseball supporters are unhappy with the CBA (collective bargaining agreement) negotiations, many conclude the delay as billionaires versus millionaires. But the alternative to a later start for spring training and/or the season can affect your club for five summers.

If waiting a month to acquire a star is worth it, then immediately picking up this player is preferable. But unnecessarily holding him back for a month could negatively affect some outcomes in more than one way if the Phillies best result is breaking even, not winning more.

“To be prepared is half the victory.” – Miguel de Cervantes

Both the MLB and the MLBPA (player’s association) want the universal DH, but the owners’ position is they are giving the union 15 jobs. However, management will avoid pitchers having injuries in the batter’s box or on the bases, so the MLBPA disagrees with this one-sided MLB thinking. Trust issues?

Owners want a 14-team postseason for dramatically increased profits. But while the players are open to increased playoff competition, they favor a 12-club format, so 14 franchises isn’t likely. Moreover, losing revenue with canceled games is more important than additional October dollars.

Players don’t want organizations to keep promotable youngsters in the minor leagues for another year of control. Basically, these prospects advance almost immediately after the team secures the extra campaign.

To illustrate, if Dave Dombrowski, POB (president of baseball operations), didn’t –for instance– promote Bryson Stott for another 162’s control despite the shortstop earning the role in the spring, there would be an uproar. Yes, the Fightins would lose some contests they could have won.

But the other way locals would not benefit is signing a youngster to a long-term deal, and it doesn’t pan out. Currently, the Phils have $4 million AAV tied up by inking Scott Kingery instead, although he earned the advancement without the extra season of control. Translation: it’s not about the fat cat versus merely being rich.

Keep in mind, this CBA is a five-year agreement, and the union wasn’t happy with the expired CBA. But once they agree, there’s no do-over. So remember, a CBA favoring the MLB over the players can affect the faithful as well.

Among the clubs waiting for the new rules, the red pinstripes are in good company with the New York Yankees, Los Angeles Dodgers and Boston Red Sox. Moreover, these franchises are near the $214 million CBT (competitive-balance threshold): MLB’s current proposal also has a 50 percent initial penalty to negotiate out.

Organizations coming out of their rebuilding phase and the New York Mets made their big splashes with the expected lockout ahead. Basically, teams filled roster slots and signed stars wanting to avoid the intersection of the new CBA and spring training. The mad rush!

When they reach agreement, front offices and agents will be hair-on-fire busy with negotiations. And this situation will probably occur during the first seven days of four spring training weeks. Additionally, the wheeling and dealing will still be strong afterward.

For POB Dombrowski, it means returning to talks with Kyle Schwarber, almost 29, to be the leadoff man with 30-homer power. And keep in mind, the POB has cut players to be at $188.6 million AAV (average annual value) for 24 roster slots. Barring a CBT increase, though, he has $25.4 million AAV to be at $214 million.

If the Phillies exceed the $214 million CBT by $5 million under the highly probable previous tax, it would cost $1 million, so they would probably increase their purchasing power to $30.4 million AAV. But they could add another $15 million AAV for July with its $3 million penalty: a total of $234 million AAV for ‘22.

After inking Schwarber due to a limited timeframe for $19 million AAV –the midpoint between an annual $18 million and the $20 million asking price– Dombrowski will have $11.4 million AAV tops. And he could go three ways for a center fielder after Schwarber’s three-year contract.

Planned by management with the lockout looming, Alec Bohm was working for a month in Clearwater with new hitting coach Kevin Long because Bohm’s batting had affected his fielding. Moreover, most players go through growing pains during their first three summers, and the Fightins won’t prematurely cut him.

Other spots: A healthy Didi Gregorius should return to form, but Stott has a shot despite a four-week spring camp. And Corey Knebel is the presumptive closer, plus Connor Brogdon recently received high marks for potential from a national publication. So, an unwearied bullpen due to a solid rotation could be livable.

Besides two seasons of Kevin Kiermaier at $8.9 million AAV, the Tampa Bay Rays could also  move Manuel Margot and his $5 million arb-estimated final year before free agency. Plus the Oakland A’s will be making multiple swaps including possibly center fielder Ramón Laureano and his $2.8 million first arb-estimated 162.

With defense a priority, Kiermaier’s $8.9 million AAV and Schwarber’s $19 million AAV would take the payroll to $216.5 million AAV. Or the Phillies could absorb Margot’s $5 million for $212.6 million AAV, but Laureano’s $2.8 million and three controlled campaigns would increase the AAV payroll to $210.4 million.

With over 100 free agents, 10-20 trades and arbitrations, players want daily negotiations, and owners want four weeks of spring training and the scheduled 162. Ergo, the targets are March 1 and 3 for the new CBA and camp’s day one respectively. And who will buzz your head for two days before day one of training? The baseball gods! 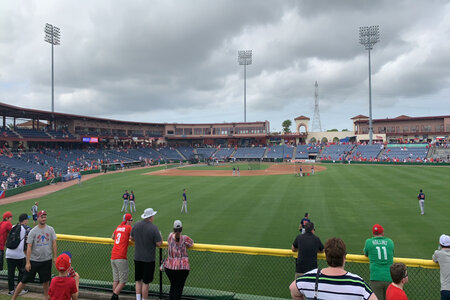