If you’ve ever wondered about the local franchise's nickname and its origin, this article provides more than just an explanation of the byname for the Philadelphia Phillies and some other baseball organizations. Yeah, a writer’s Wild West.

Many handles existed –some for only a few weeks– because scribes created team nicknames instead of, for instance, awkwardly writing The Philadelphia National League Base Ball Club. So, they became the Phillies –or Quakers to some– in 1883. But their long-lasting byname didn’t appear on their jerseys until 1933.

“Baseball has always been slow to accept change. Only through dire pressure can any radical change be accomplished." – Ford Frick.

In those days, players wore knickerbockers: short pants gathered at the knee. And they had long stockings up to their knees. Instead, though, of their official name, writers went with the Red Caps, Blues, White Stockings, Browns, Red Sox, Dark Blues, Reds, and Cardinals (cardinal red).

Baseball monikers came from geography, local animals, a skipper's name or nickname, local disasters and an Easterner's fascination with the Wild West. So, pirates and Indians equated respectively to rough, burly, rowdy men and primitive savages in their view.

Before the first NL season in 1876, wealthy men invested heavily, formed eight franchises, and charged admission like other leagues had done since 1862. And these owners hired players, purchased equipment and uniforms, and secured ballparks.

In the 1880s, host city bynames came into vogue: some were alliterative (Troy Trojans). And early club monikers historically were the most popular of many unofficial names. Moreover, the NL in 1882 issued a decree for every organization to have a team color because stocking nicknames were crowd-pleasers.

For arriving opponents, many American scribes would choose a league-standardized name: Pittsburgh Nationals –and eventually Boston Americans. Back then, there were other leagues besides the NL. Or out-of-town writers could select the city name: the Philadelphias, the Chicagos, the Pittsburghs and the Detroits.

In 1882, the Worcester Ruby Legs ended their three-year stint, and a franchise was available. So, the NL awarded it to Philadelphia, but remember writers had used monikers long before the forming of the Senior Circuit.

In those days, a Phillie was a resident of Philly, and it also showed other cities where the team hailed from. However, one scribe insisted on the Quakers instead, but writers had previously used Phillies, Quakers, and Athletics as handles. They were around long before the NL in various leagues and athletic clubs.

Unfortunately, one glaring exception for a byname was in New York City in 1884. The scribes' moniker for a working man's team was a pejorative, and what was this negative connotation? The Brooklyn Trolley Dodgers. Basically, it was an earlier version of the current big and little brothers: the Yankees and Mets respectively.

In 1890, the Philadelphia Quakers were in the newly minted Players League. So, one writer –who had named the NL franchise the Quakers– decided to go by the stocking color: The PL club was the Blue Quakers, and the NL organization was the Red Quakers.

Before the 1905 campaign, the Washington owners had conducted a renaming contest for the American League Senators to paper over a losing reputation, and the fans voted for the Nationals. But scribes and fans interchangeably called them the Nationals or continued with the Senators to avoid confusion with NL teams.

During the 1930s, franchises made their bynames official, which for the Phillies was 1933 with the moniker appearing for the first time across their jersey. Translation: The ‘3os were the beginning of marketing merchandise.

In the late fall of 1943, Robert Carpenter Jr., 28, became the new proprietor of the Philadelphia Phillies. They had produced a losing history, and the NL ousted the previous, short-lived owner because of a gambling scandal. Thereafter, Carpenter held a renaming contest leading to the Blue Jays as the winning entry.

Mrs. Elizabeth Crooks –not a fictional character– won the $100 war bond to rename the team of previous owner William D. Cox, who had been guilty of baseball’s gambling no-no. For the front office, though, their best effort to generate some offseason publicity blew up in their faces. Yes, this would be a feast for comedians today.

Management only added a patch of a blue jay to the jersey’s left shoulder because the student council at John Hopkins University in Baltimore had immediately squawked. For 68 years, it had been their athletic teams’ nickname, and they didn’t want it tarnished with the Phils’ losing reputation. Unfortunately or fortunately, a reset wasn’t to be. 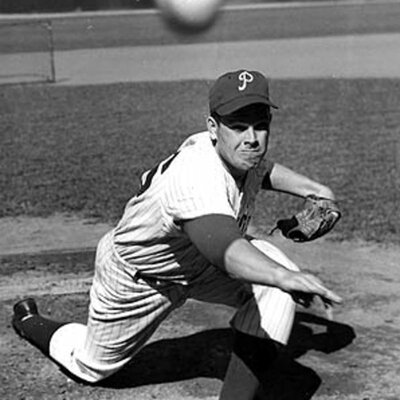