While the Philadelphia Phillies faithful waited impatiently, many didn’t realize the players must live with these decisions for five years. And, now, both sides have reached the deadline of Feb. 28 with March 1 as the new threshold for the official CBA (collective bargaining agreement). A surprise, no?

Although instant gratification is mostly today’s norm, the speed of any union negotiations has not changed. And, yes, the CBA for Major League Baseball was moving slowly until the final days before any cancellation of April games. However, the Phillies and the MLB could make up some contests.

“Good ideas are not adopted automatically. They must be driven into practice with courageous impatience.” – Hyman Rickover

For clarity, the owners locked out the players: It wasn’t a strike. But both sides met daily through Monday or the final eight consecutive days.

In many organizations, a sole proprietor has the final say on major expenditures. Therefore, he isn’t in favor of the players having more financially because of the uncertainty: 2020’s 60 games and 28 franchises losing money in 2021.

Concerning the spenders’ commitments to top-tier stars, the Texas Rangers and Detroit Tigers had low payroll AAVs (average annual value) from ‘21 at their rebuilding’s completion. Meanwhile, the New York Mets ran their tally up to roughly $272 million AAV.

Despite the owners’ approach on many contentious issues, the Phillies, New York Yankees, Los Angeles Dodgers and Boston Red Sox decided to wait for a new CBA. Judging, though, by MLB’s offers to the players association, waiting was a no-brainer.

*Plus two tiers of draft penalties.

** Third offer has lower numbers for the in-between years.

The players didn’t buy the next offer of an extra $2 million AAV to $222 million AAV except with new massive penalties. Translation: The union negotiated that out just to avoid going backwards and dropped all of their original 100 percent demand for Super Twos: Each side eliminated their unrealistic proposals.

Even though the players are asking for $245-273 million AAV, they probably expected counteroffers toward a midpoint of $227-246 million AAV. But even $225-245 million AAV with the same tax rates from the previous CBA would be acceptable.

The MLB wanted a 14-club postseason because they would have a sizable boost in revenue from attendance, television rights, and other income sources. However, the players association declined it because a franchise could make the playoffs without additional spending.

Players remember their salad days in the majors, so they want youngsters to receive an appropriate income with bonuses for excelling. To illustrate, Ranger Suarez will probably earn $720 thousand for his third season instead of $1.8 million if there was an increase from the 22 percent for Super Two qualification.

Suarez’s service time is 2.112: two years and 112 days. However, the top 22 percent of players have 2.116 years or more up to nearly three seasons, but the union dropped its ask of 30 percent (down from its original 100 percent). So the Phillies won’t increase their payroll AAV by $1.1 million either. Ergo, clubs waited.

When a rookie is ready for a shot in the majors, a team can briefly keep him in the minors for another year’s control. The Phils, though, signed Scott Kingery long-termwise instead; now, they are carrying $4 million AAV for 2022 and 2023.

To discourage tanking via total restructuring, the players association wants less revenue sharing, a lottery system for non-playoff organizations, and a restriction on the number of campaigns for top draft selections. Recently, there is movement by both sides to resolve this issue.

The owners had wanted an agreement by Feb. 28 for a full season but extended the deadline to March 1 with possibly even more flexibility. Now, Phillies fans, a new CBA is within striking distance.  Since this morning, though, my edit is the MLB and MLBPA have canceled the first two series to complete the new CBA: one week.

Until Monday, the MLB pushed for more, not less: It was in the owners’ best interest. The players, though, bargained for those who will come to the Show after them. So, what can fans reduce this to in three words? Me or we! 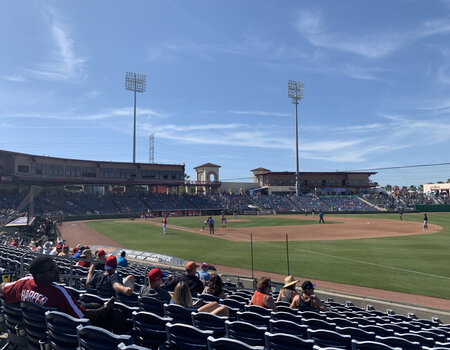