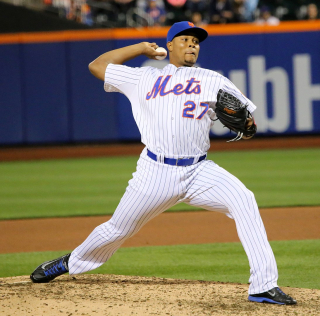 The Phillies have made their first free agent move after the resumption of baseball from the lockout.  The Phillies were reportedly out to acquire some back-end bullpen arms, and the Phillies have added one.  That comes in former New York Mets closer Jeurys Familia.

Free-agent reliever Jeurys Familia in agreement with the Philadelphia Phillies, pending physical, according to sources familiar with the situation.

Familia came up with the Mets in 2012, and aside from the latter part of the 2018 season, when he was traded to the Oakland Athletics, he has played for the Mets ever since.  Familia's best year was in 2016, when as the closer he saved 51 games and finished 67, leading the lead in both.  He was a National League All Star that year.

In 2021, Familia appeared in 65 games, going 9-4 with a 3.94 earned run average.   His most recent contract with the Mets, a three-year deal to return prior the 2019 season, Familia did not serve as a closer.  Overall he pitched well enough that the Mets were reportedly interested in bringing him back in 2022.

The Phillies bullpen has two pieces added at the back end, with Corey Knebel signing prior to the December 1 lockout.   With Hector Neris, Archie Bradley, and Ian Kennedy all departing as free agents, the Phillies could still use some more help.

But the bullpen has one additional solid piece.