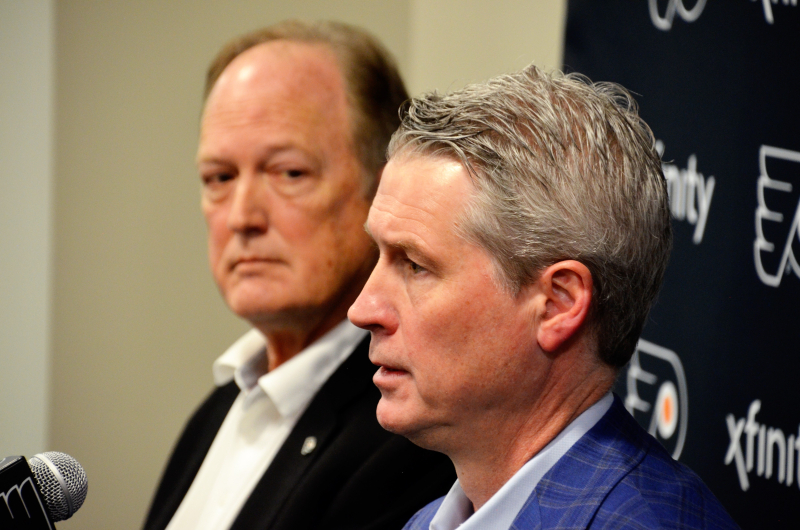 The NHL trade deadline is less than two weeks away, and for the Flyers, it marks a critical time in their course of direction as a franchise.

In the last offseason alone, changes were made left and right to the current roster. Five players were shipped off in trades within a week, marking a clear changing of the usual suspects. But ultimately, it seems it has become merely a rearranging of the deck chairs on the Titanic.

Fletcher and Flyers Governor Dave Scott held a press conference at the halfway mark of the season, discussing the frustration and even going so far as to apologize to the fans. They vowed to build a contender, but expressed a desire to do so by “aggressively retooling,” and balking at the idea of a total rebuild. That retool officially began on Thursday with the team’s first decision regarding next season. The team re-signed defenseman Rasmus Ristolainen to a five-year extension worth $25.5 million, an AAV of $5.1 million.

On the surface, the deal isn’t necessarily a bad one in terms of compensation. The going rate for a middle-six defenseman is roughly at the $6 million AAV mark and getting Ristolainen to re-sign for anything less than what he made on his previous contract, a $5.4 million cap hit, should be considered a victory.

But you have to consider everything that this signing stands for in regards to the Flyers direction as a franchise. What type of message does it send? How does it affect anything else they can do? And what does that mean for next year or the duration of the five-year deal?

It’s no secret that Ristolainen is a polarizing figure in the hockey world. Old-school fans, coaches, and executives love what he brings from a physicality standpoint. A more new-school analytics approach, on the other hand, views him as a liability. Truth is Ristolainen essentially falls in between.

What that amounts to is a player that is perfectly average or even mediocre. He doesn’t move the needle by himself. His mistakes are going to be noticeable. It’s quite the embodiment of the last decade of Flyers hockey.

Ristolainen’s style fits the Flyers brand for sure. He’s big, physical, and provides an imposing presence on the ice. When you have names like Bobby Clarke and Paul Holmgren still serving as senior advisors and their input is certainly on the table, you get players like this that the franchise has been enamored with since the 1970’s.

There is a part of the fanbase that still finds this style of play and a big-body, physical presence like Ristolainen endearing. And there certainly is a place for players like that in today’s game. You need to be difficult to play against and big bodies can do that.

But that can only be an element of your game, not the entire thing. The Flyers are putting quite the emphasis on trying to build a bigger roster that doesn’t get pushed around so easily. That’s all well and good when you can balance it with skill and speed, two elements very prominent in the game today that the Flyers don’t possess enough.

All you have to do is look around Wells Fargo Center to see how much a player like Ristolainen, or any of the new additions this offseason, are moving the needle. The building is half-empty most nights. Fans want to see wins more than anything. There isn’t anything to suggest that prolonging Ristolainen’s stay will do that.

Now you also have to consider what spending $5.1 million of cap space for next season amounts to. How does that influence this “aggressive retool” that is supposed to take place? It ultimately leaves the Flyers relying on a lot of the same things they did this season. It relies on hope that Sean Couturier, Ryan Ellis, and Kevin Hayes, among others, will stay healthy. It relies on outstanding goaltending on a nightly basis – no pressure, Carter Hart. It relies on young players finding their way, if they are even given the chance to do so without being dashed to the minors.

It also brings into question the futures of other players. With Ristolainen now locked up and Ellis also with five years remaining on his contract, could Travis Sanheim find his way to the trading block. Sanheim has one year left on his deal and has arguably been the Flyers best defenseman for most of the season. What about Ivan Provorov? Has his down season led to some doubts about his future? In that case, would the Flyers be willing to move on from a younger defenseman like Sanheim or Provorov after choosing Ellis and Ristolainen as their pieces to build around?

All of it makes for a confusing direction for the Flyers future. They have to make key decisions regarding Claude Giroux – who is as much involved in the decision as the team – and names like Justin Braun, Derick Brassard, and Martin Jones could be up for grabs at the deadline as well.

But outside of that, there’s not a lot of movement that is going to happen at the deadline. There’s no guarantee that Brassard or Jones hold much value outside of a mid-to-late draft pick. Braun could net a return that surprises some – right-handed defensemen, especially veterans, are a commodity in today’s NHL. But the main course, as it always has been, is Giroux. That could be the deal that sets everything in motion. Getting a quality return is imperative.

That said, what happens now if Giroux’s value isn’t what the team hopes? What happens if it doesn’t set the course on building for the future? It makes the Ristolainen extension even more confusing.

It sends a message from the top down to the fanbase that the ceiling is just to hopefully make the playoffs, that settling for average throughout an 82-game season in hopes of making the tournament and making a run for a Stanley Cup more out of luck than skill is acceptable. It has been the narrative and identity of this team for the last decade, and it’s all finally come to a head this season, as fans are able to return to the building completely – no masks, no vaccine mandates, no reason to not be in the seats outside of the floundering performance on the ice. Essentially starting an aggressive retool with a move that screams more of the same isn’t the way to win people back.

It becomes more apparent to call that a realistic goal when you consider that another deal like this, especially at the five-year term, further cap-straps the Flyers. It limits what they can do in the offseason without incredible creativity. Fletcher tried his hand at that last offseason. Most of it hasn’t gone according to plan.

For a team that has admitted it needs more high-end impact talent, their first move of an aggressive retool was more of the same. Maybe that will help them accrue more high-impact talent in the most natural way to do it: by obtaining high draft picks. They are on track for one this year and could certainly have another season like this next year.

But not two months ago, that wasn’t the message from management. That wasn’t the expectations Dave Scott seemed to set for as soon as next season and returning to contender status. It all makes for a confusing message and sense of direction, just as the trade deadline starts to approach and a time to set the foundation for change draws near.