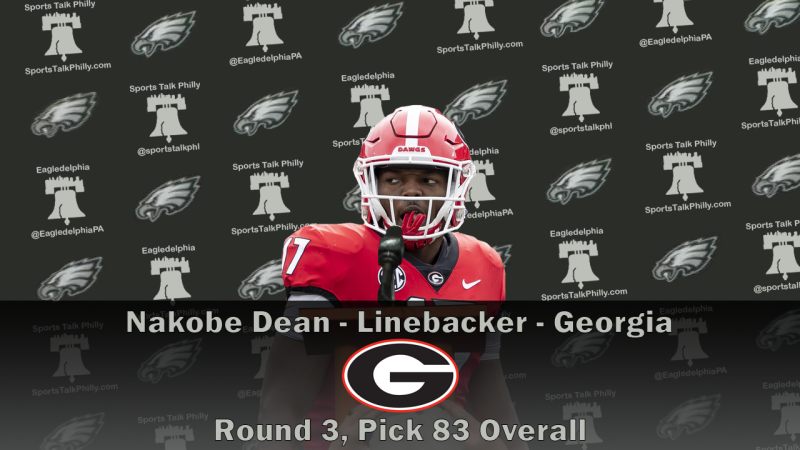 So far in the 2022 draft, the Eagles have made just two picks (A defensive tackle and a center) after making a big-time trade for an established number one receiver.

After all that, the Birds had yet to address any of the needs they had entering the draft, which consisted of essentially every defensive position except for defensive tackle.

The Eagles have been going best available in an attempt to build the best team (and lines) they can.

The third round proved to be a positional match for the Eagles, as they Birds drafted Nakobe Dean out of Georgia with the 83rd pick.

Dean was considered in the top 20 to 40 prospects in the draft by nearly every big board and the Birds are hoping all those services were right and they just landed a first-round talent two rounds later.

A unanimous All-American for the Bulldogs championship squad, Dean had 72 tackles (10.5 for loss) along with six sacks, two forced fumbles, eight defensed passes and two interceptions.

He has the instincts, intelligence and quickness to play coverage sideline to sideline as well as make plays in the run game.

He can have a bit of sloppy tackling at times due in large part to his smaller frame, but that really doesn’t explain his fall so deep in the draft (current reports are that he may miss some reps due to medical issues).

The medical issue is a pectoral strain that Dean has decided to PT rather than undergo surgery. The Eagle brass believes this will work and Dean will not require a redshirt season.

Assuming he’s healthy, Dean figures to be a day one starter alongside Kyzir White and Hasson Reddick.

He will pair up with teammate Jordan Davis, the very same player that opened the holes for him to succeed at the college level.

The Eagles still have two picks in the draft at 154 (fifth-round) and 237 (seventh-round).