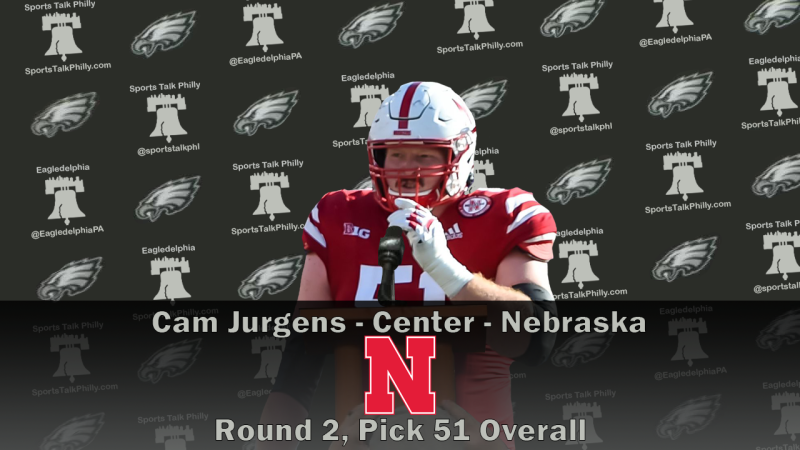 The Eagles have had a very unconventional drafts by their own standards.

Instead of standing pat, the Birds first moved up to draft DT Jordan Davis.

The Eagles then made a move to acquire AJ Brown and solidify their receiving corps.

It wasn’t long after the second trade that a new extension for AJ Brown was announced.

The two trades, however, had left the Eagles with only four more picks in the draft with essentially all of the defensive needs they had entering the draft (S, CB, DE and LB) entirely unaddressed.

The Eagles must have chosen to go best-available, however, taking a center out of Nebraska.

Jurgens was widely ranked in the top 50 prospects in this draft and was a four-year starter at Nebraska.

He transitioned from tight end when he joined the Cornhuskers and immediately took to the center position.

Jurgens maintains some of that mobility he had as a tight end, which helps him to get into space and make blocks downfield.

The primary concerns on him are injuries (missed one game in 2020 and much of the 2018 season) and his technique as he was heavily penalized for being too handsy.

The ladder is an issue that the Eagles expect the greatest offensive line coach ever (Stoutland) to work out.

I could say Jurgens is the replacement plan for Jason Kelce, but he’d be the third one still on the roster today behind Seumalo and Dickerson.

Jurgens would seem likely to redshirt this season given that he has not played another role on the line and the previous two Kelce replacements figure to start at each guard spot, but his presence does create a bit of a roster crunch for the Eagles.

Jurgens joins Brett Toth, Andre Dillard, Nate Herbig, Jack Anderson, Sua Opeta, Kayode Awosika, Le’Raven Clark and Jack Driscoll as players who would seemingly be backup offensive lineman on the roster and the Birds certainly do not have room for 14 OL on the roster (5 starters and the above 9).

It’s a scenario that may force the Birds to make a trade to avoid losing a player they like for nothing. It would also seem to indicate they plan to keep Dickerson at left guard moving forward.

While fans may not like the pick position-wise, that shouldn’t be held against the quality player Jurgens can be.

The Eagles next pick is in Round Three at 83 overall.