Eagles Flyers Phillies Sixers About Us Write For Us
Sixers Left Grasping for Answers as Series Heads Back to Toronto for Game 6
Eagles Trade Up, Select Jordan Davis At 13 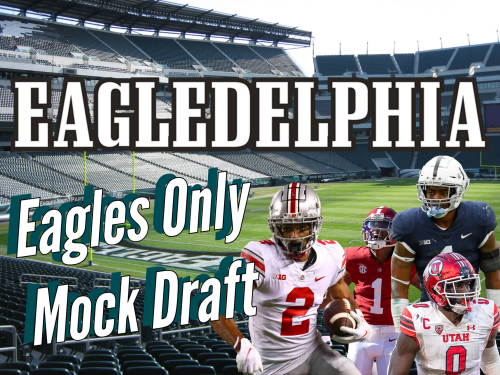 Welcome to the final, waning hours of NFL Draft season!  By now you’ve probably been mock drafted to sleep but I urge you to read just one more.  The most important one if you’re asking me.  Yes, I am very biased.

Welcome to the 2022 Eagledelphia “Eagles Only” Mock Draft!

Here’s how this is going to go, Eagles picks only, no trades.  Was the headline not a giveaway?!  Sorry, I just don’t have the energy to create an alternate universe where the Birds are trading picks.  Will Howie make moves, absolutely! But not in this draft.

So, how did I reach my picks? Glad you asked, it was done with the help of the PFF Mock Draft Simulator.  The simulator was adjusted to avoid as many shenanigans as possible and to create an accurate-ish NFL Draft experience.

Now, with the 15th pick in the 2022 Eagledelphia Mock Draft, the Philadelphia Eagles select: 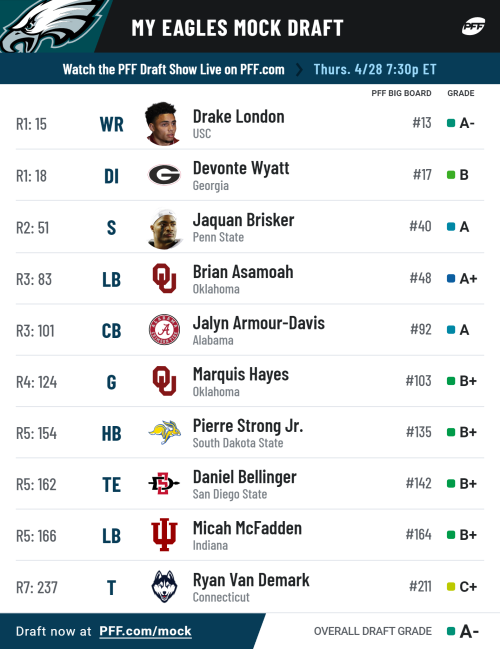 A few thoughts on some of the picks here:

Drake London is the #2 wide receiver behind Jameson Williams according to PFF’s NFL Draft rankings.  Like Williams, London was injured during the 2022 season–a broken leg–and only competed in eight games at USC.  In those eight games, 88 catches for 1,084-yards, and seven touchdowns.  He’s a big bodied wide receiver, 6’4, 219 lbs, that the Eagles desperately need. PFF

Devonte Wyatt is a big mama jamma! Yes, that is “draft speak” for an excellent defensive tackle who can immediately start on the defensive line.  The 6’3, 304 lbs is explosive, he can stop the run, and more importantly get to the quarterback.  The Eagles need to re-establish the nastiness on the defensive line and Wyatt can help do that.

Jaquan Brisker developed into a complete football player at Penn State and fills an immediate need for the Eagles at safety.  He has the ability to play “in the box” but also has tremendous coverage ability.  He’s another day one starter for the Eagles defense.

Brian Asamoah is the type of linebacker that the Eagles need in defense, rangey with great sideline-to-sideline instincts and the ability to cover.  Imagine that, a linebacker who can cover! It’s a desperate need in the Eagles defense and Asamoah fills that void.  Again, another player that can play day one for the Birds.

Jalyn Armour-Davis is an interesting NFL prospect.  Armour-Davis only started one season for Alabama but continued to play better each game which helped raise his draft stock.  He can do a little bit of everything in the secondary which is something the Eagles desperately need.

A bullet point for the rest: