Eagles Flyers Phillies Sixers About Us Write For Us
Thompson, Olofsson Lead Sabres to Season Sweep of Flyers
Philadelphia Stars outshined in Week 1 of USFL revival

Current Philadelphia Phillies statistics aside, many on the active  roster are eyeing this 162 as a financial opportunity, but 2022’s results also depend on good fortune and health. Yes, two starters, three late-inning relievers and four possible regulars are betting on themselves. But not 10 games in.

Nine of 26 Phillies are either performing for a multi-year contract, another one-summer pact, or an exercised club option: more than one third of the 26-man roster-to-be. Moreover, this doesn’t include many youngsters earning a daily role or an active-26 spot, and there are six men for two jobs.

“Just give me 25 guys on the last year of their contracts; I'll win a pennant every year.” - Sparky Anderson

After three series, some are still on a pitch count, and players are nowhere near even 100 at-bats. Realistically, these stars must perform to earn top-dollar offers, and they know their production limitations and possibilities. But, unfortunately, some fans’ expectations are either too high or too low.

While “three-slot hurler” Zach Eflin is healthy after knee surgery, a money tug-of-war is beneath the surface. Proposals: Eflin wants $6.9 million, the Phils offer is $5.15 million, and the arb estimate is $6.025 million: $0.875 million separates both sides from the midpoint evaluation.

Kyle Gibson could end up in the five spot even though he’ll likely have similar stats to Eflin. Basically, National League franchises haven’t faced him: Five have seen him only once, and five haven’t at all, which is to the veteran’s advantage by moving to the NL.

In the closer's role, Corey Knebel is a fireballer with a killer curve, and he’s learned to mix them rather than mostly relying on his heater. Plus he had insisted on a one-campaign pact for a shot at the free-agency jackpot, and so far he hasn’t disappointed management. No, locals haven’t realized this asset, but they will.

Brad Hand signed for $6 million after fixing a rough patch, and he wants to bounce back statistically to double his current contract: $2 million more 2021. Presently, he resembles the dominant closer from 2020 and before. And if he succeeds, the red pinstripes will have a solid one-two punch to preserve victories.

Jeurys Familia, 32.5, is a “sixth or seventh frame” piece, and he still has some seasons ahead. For now, though, he’s probably hoping a good summer will lead to a two-year pact because solid pitching is always welcome. Granted, he isn’t the ninth-inning fireman of 2018, but he doesn’t have to be.

Even though Didi Gregorius, 32, is healthy, he won’t re-up with Bryson Stott ready for the everyday job in ‘23. But the veteran is fielding and hitting with the injury behind him and playing for his next multi-campaign agreement. For now, he’ll be in the six or seven hole depending on the opposing starter.

Jean Segura, 32, is in a different situation with a club option for $17 million or a $1 million buyout. Currently, he’s earning $14.85 million, and the Fightins will probably exercise his 2023 option if his production doesn’t tail off because they don’t have a keystone prospect ready for next season.

At the hot corner, throwing-challenged Alec Bohm, rookie Stott and utility-mislabeled Johan Camargo have upsides and downsides. Meanwhile, Matt Vierling temporarily has the center field job, but Odubel Herrera is heading to Allentown. And the last pitch Mickey Moniak saw put him on the injured list.

Although Bohm can fix throwing errors, this requires daily infield practice throwing at the first sacker’s chest, and honing that took perfectionist Freddy Galvis months. My guess: An infielder must adjust the grip on the ball as he’s setting his footwork, and doing it twice could be a double clutch.

Getting major league experience is important for Stott’s growth because he'll probably be the 2023 shortstop. But if he struggles offensively, the Phils could option him to Triple-A and call him up later, but it depends on their run-for-the-postseason needs and his progress.

Bohm and Stott are having their struggles of throwing and hitting respectively, so Camargo could earn the spot. Originally, he had been a regular and averaged .272 with 19 bombs and 76 RBIs for the 2018 Atlanta Braves.  But keep in mind, they inked Josh Donaldson before Austin Riley’s promotion. And Camargo was out.

For ‘22, the Phillies have third base options, but center field was to be a platoon for a re-upped Herrera and Vierling. Recently, though, Vierling is getting some knocks, and things may work out when he only faces southpaws: the original plan. And Herrera will shortly return after enough preseason, rehab at-bats.

While the red pinstripes penciled in Herrera for right-handed starters, he had hit lefties somewhat in 2021: .252 of .260 overall with three of 13 home runs and 12 of 51 RBIs. Plus he’s an adequate defender and hit .301 with seven homers and 23 RBIs down the stretch, including his four for 12 in Atlanta.

But if Herrera struggles, Moniak, the spring training surprise, may be ready to claim the spot before ‘23. Yes, he had an eye-opening camp and success with a new approach instructed by hitting coach Kevin Long. And it had worked until Clearwater’s final contest when he suffered a hairline hand fracture on a hit by pitch.

Realistically, all number-one selections are not equal: There’s a difference between a high schooler and a collegiate star. In fact, only 58 percent of those high school signings even make the Show in any capacity. So, who would surprise the Phillies faithful in center field and the hot corner? Moniak and Camargo! 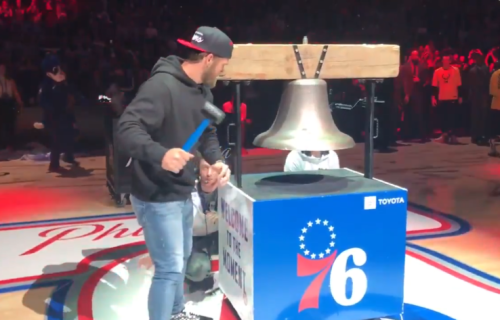 So far the relievers are performing and Bohm has to catch the ball as well as he hits the ball. Hopefully, the center field platooning will keep us in the games.
It's a great article. as always.